The post-covid commodities boom: What it means for Egypt 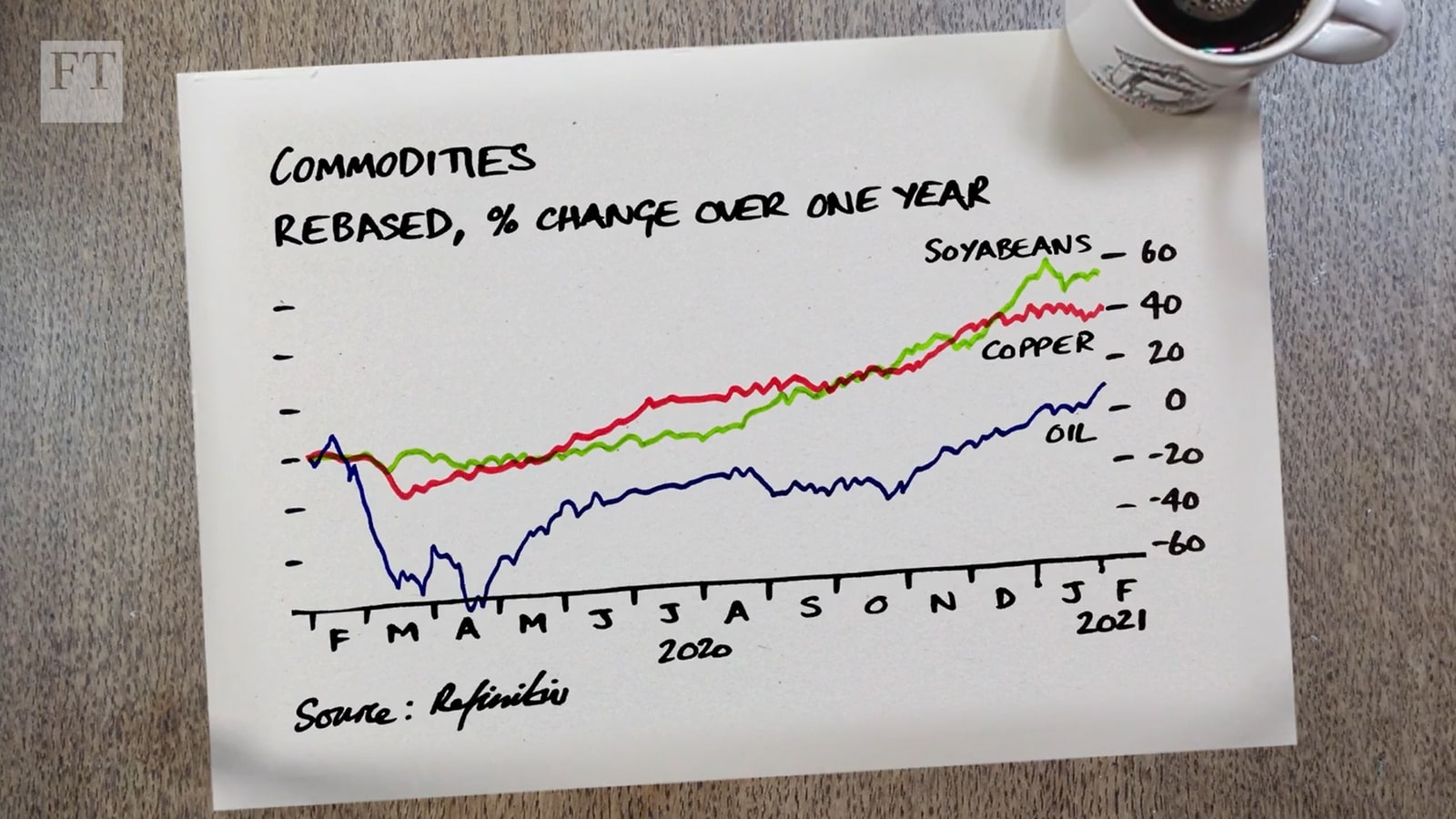 What does the global commodities boom mean for Egypt? In past weeks, speculation that we’re at the beginning of a so-called “commodities supercycle” has been spreading across the pages of the financial press. Commodities prices have been seeing strong gains since the covid-inspired market crash last March, prompting a handful of Wall Street banks to call the start of a multi-year boom driven by the renewable energy revolution, ultra-loose monetary policy, and huge demand from China.

Gains for some commodities, and inflation for the rest of us: Whether or not this is the opening salvo of a supercycle, analysts and market participants tell us that companies in the metals and fertilizers sectors stand to gain from the current environment, though the country’s dependence on imports mean that it will likely hurt us more than it helps us.

Commodity prices have been rising across the board since the market crash caused by the covid-19 pandemic last spring. Mining companies are paying out record dividends in response to a surge in metal prices, particularly iron and copper which have risen more than 80% over the past 12 months. Oil is up more than 230% since the historic near-zero levels it reached last March and April, and food prices rose to six-year highs in January, driven by essentials including wheat, corn and soybeans.

This hasn’t yet been passed to the broader Egyptian economy: Food price inflation has been falling in recent months, and there are no signs that this is going to change anytime soon, Mohamed Abu Basha, head of macro research at EFG Hermes, tells us. This is mainly due to weak consumption, said Noaman Khalid, analyst at Arqaam Capital, who said that heightened prices may take a while to filter through to other parts of the economy. Meanwhile, fuel prices — which are set by the government — will remain stable at least until the end of the quarter. And the annual headline rate has been muted in past months, remaining below 5% for much of the second half of last year.

But analysts are expecting that to change in the months ahead: Arqaam Capital sees inflation at 6-7% through 2021, EFG Hermes is forecasting 6%, while Pharos is penciling in a sustained rise in the headline rate averaging 7% until the fourth quarter, when it might begin to back off.

Egypt will import inflation should prices continue to rise, said Abu Basha. The rally is concentrated in essential commodities, and Egypt doesn’t have a lot of exports to emerge as a winner, he said. The only exception are fertilizers, of which the country is a net exporter, he noted.

Local metal prices have already been climbing: Local steel prices have risen 38% — or nearly EGP 4k per tonne — since November, more or less mirroring a surge in the price of iron ore on the global market. Consumer prices for steel sold by domestic producers are now at EGP 13.9k, up from EGP 10.1k at the start of November. Prices responded to a sharp increase globally between November and December 2020 and then stabilized the following month, after China imposed temporary steel production curbs at the start of 2021. With China’s giant steel industry resuming full capacity in February, global prices are expected to continue on their upward trend.

Though weak demand may prevent local prices from rising further: Factories are at best operating at 50-60% capacity, and the disruption caused by the covid-19 lockdown and the government’s construction ban means they’ve accumulated inventory, which derailed material purchases, Mohamed Hanafy, head of the Chamber of Metallurgical Industries, told Enterprise. The excess inventory meant some were forced to sell at narrow profit margins, or even at small losses, he said.

Whether metal companies benefit will depend on their size: Large, EGX-listed metals producers such as Ezz Steel and Egypt Aluminum will benefit from a commodities rally due to their size and ability to absorb inflationary pressures, EFG Hermes analysts wrote in a research note this week. “The large companies are going to see inflation on their feedstock but the inflation on their product prices means that typically their margins still grow during a super cycle,” EFG’s head of materials and co-author of the report Yousef Husseini told us.

And their position in the value chain: “During a supercycle the margin in the value chain moves up from the end products,” Husseini says. “The closer you are to the end manufactured product, the more negative it is for you, and farther up it’s typically more positive for you.”

Fertilizers will be the big winners should food prices pick up steam: Egyptian fertilizer producers are poised to do well in an environment of rising food prices, Husseini told us. Increasing prices provide an incentive to farmers to produce more so they buy more fertilizers, which in turn allows fertilizer manufacturers to charge higher prices. The fixed price of gas is also a huge plus, giving them the price increase without the additional cost burden, he said.

The government — which is currently considering hedging against rising wheat prices — will take a different view. As the world’s biggest importer of wheat, Egypt’s budget is heavily exposed to large fluctuations in global prices. The ongoing rally has seen wheat prices increase more than 40% from lows witnessed in March to USD 207 per tonne on 1 March. The grain moved with global commodity prices, but also faced further pressure after Russia, the world’s largest producer, announced export restrictions late last year.

Also putting public finances under pressure: Oil. Though state finances have benefited for much of the fiscal year from oil remaining below the USD 61/bbl benchmark price used for the FY 2020-2021 budget, recent gains have pushed Brent up to more than USD 67/bbl, pushing up the government’s import bill. The Finance Ministry may have to consider taking out additional derivatives contracts to hedge against the possibility of further increases in the oil price undermining its fiscal position.

But higher prices may translate into stronger inflows of hard currency: A recovering global economy could mean the goods we would get from being exposed to more trade and investment could outweigh the negatives of cost-driven inflation, Arqaam’s Khalid told us. Rising oil prices will also lead to a stronger GCC and potentially higher remittances from Egyptians working in the Gulf, as well as more Khaleeji FDI, he said. And increases in natural gas prices are a plus, given Egypt’s status as a net gas exporter.