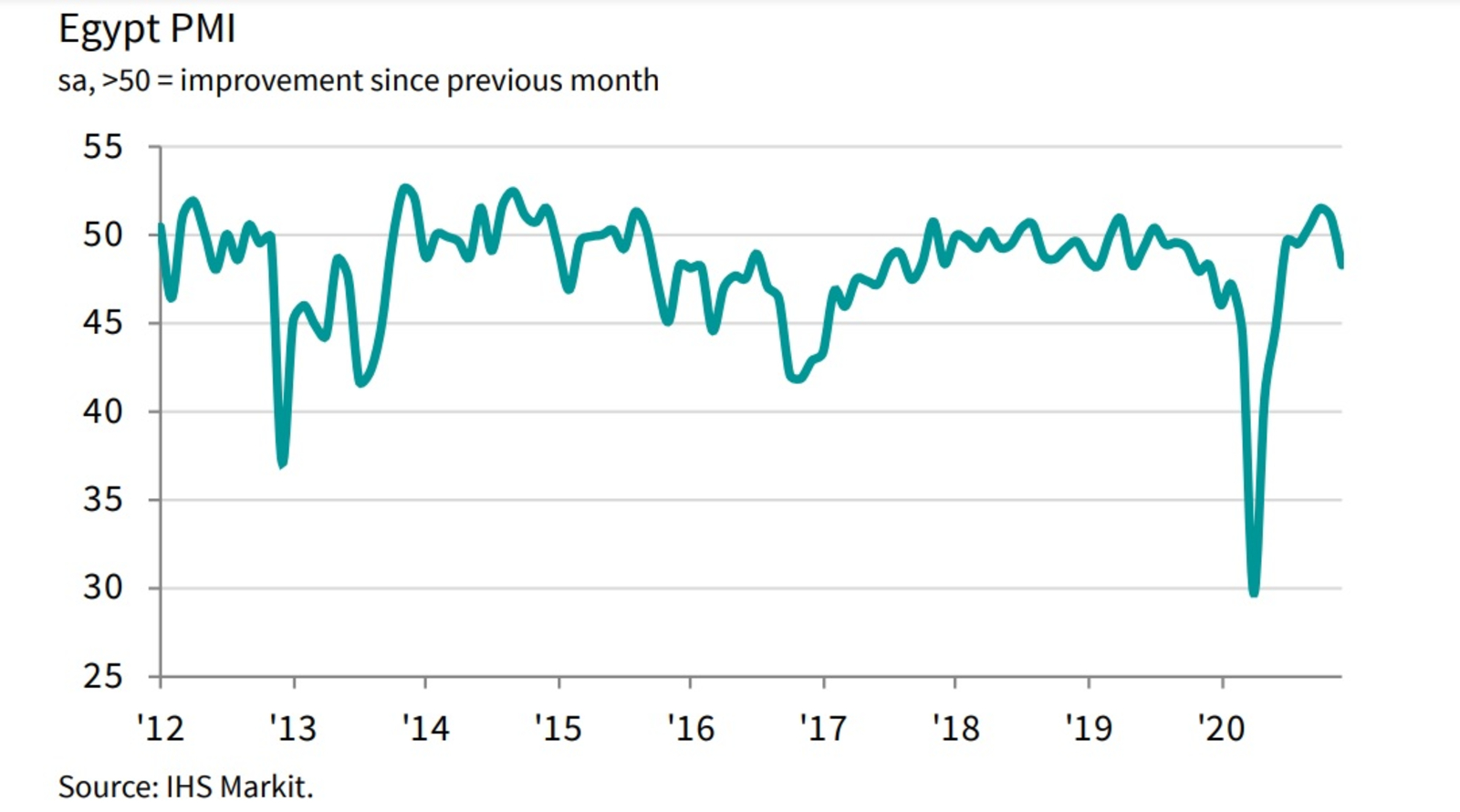 Egypt’s non-oil private sector recovery stalled again in December as covid-19 cases climbed steadily throughout the month, causing muted consumer demand, according to IHS Markit’s purchasing manager’s index (PMI) (pdf). The PMI gauge fell to 48.2 in December, down from 50.9 in November, signaling a “moderate deterioration” in business conditions as both output levels and new orders showed a “solid fall.” PMI readings above 50.0 indicate expansionary activity, while a reading below means it is contracting. Bloomberg also had the story.

December’s reading ended a three-month growth streak as the private sector activity began to recover from an all-time low in April. But even though there was a downturn, it was nowhere near the plunge in output and sales seen at the height of the pandemic.

Customers are still apprehensive of the uptick in cases and the possibility of another lockdown, with businesses surveyed saying that “fears of a ‘second wave’ of the pandemic and renewed lockdown measures meant some businesses held off from completing new orders,” said David Owen, economist at IHS Markit.

The drop in new orders “was a surprise” to businesses, which had begun stockpiling inputs in 4Q2020 as recovering activity built a pipeline of new orders. The accelerated stock building on an anticipated uptick in demand that didn’t pan out left unused inventory levels rising at the quickest pace since June 2012.

As a result, purchasing activity fell sharply and easing backlog pressures led to employment levels dropping at the strongest pace since August, “albeit still only moderate overall.”

Output prices rose only slightly in December, with some businesses cutting charges to attract new customers and orders. For those who did raise prices, “higher charges were generally linked to the pass-through of greater costs to clients, as raw materials such as copper and iron were sharply up in price.”

Amid the downturn, sentiment for the 12-month outlook was (kind of) a bright spot: The outlook for activity over the next year showed improvement last month as businesses placed their hopes on a recovery in 2021. “Optimism around effective covid-19 vaccines led the improvement, while there were also expectations of new contracts and business expansion.” That being said, overall sentiment was lower than the series average.

Meanwhile, in the Gulf: