Welcome to the month of December, friends. Longtime readers know we get maudlin as year-end approaches, and little makes us sappier than our gratitude to all of you for choosing to start your morning with Enterprise. Thank you for this — and to all of you who have taken the time to write in with nice comments about our new look.

TODAY’S BIG STORY is the rollout of covid vaccines here and around the world as we look across the chasm to a post-corona world.

December is the big month in developed economies: The UK looks like it’s rolling out a jab on 7 December, followed by the US on 10 December and Germany by mid-month, the Financial Times writes. Canada, meanwhile, could start the process in January. The news comes as Moderna seeks approvals in the US and European Union for its vaccine. But the New York Times warns: It is darkest before dawn.

Here at home, we can expect a vaccine to start rolling out in the first quarter of 2021, Hossam Hosni, head of the Health Ministry’s covid-19 committee, told El Hekaya’s Amr Adib last night. Hosni didn’t specify which shot(s) would roll out first, but said Egypt wont buy anything that doesn’t have a proven safety profile (watch, runtime: 3:46 | 0:58). Finance Minister Mohamed Maait confirmed last night that the government has still not settled on which vaccine(s) it plans to purchase (watch, runtime: 8:42).

We expect officials to try a two-pronged approach: import a bolus of shots to get things started and to land the rights to manufacture at state-owned Vacsera, one of the continent’s largest vaccine makers. At-risk people will have first dibs on the vaccine, Hosni said.

Which shots are most effective? Pfizer / BioNTech lead the pack at 95%, followed by Moderna at 94%, Sputnik V (92%) and AstraZeneca (90%). China’s entry seems to have fallen by the wayside after not reporting a success rate. These success rates are wildly above what scientists had hoped for in the early days of the pandemic, when they said a shot with that was 50% effective would be good enough.

YOUR MORNING DISTRACTION- We meant to flag this last week, but got distracted. Go read How venture capitalists are deforming capitalism in the New Yorker, which is driving US VCs bonkers. Reminder: As our friends Tarek Assaad and Karim Hussein at Algebra Ventures discussed with us on Making It, venture capital in emerging markets is an entirely different (and much more constructive) game than it is in the west.

Four-day workweeks are a thing again, this time as Unilever says it’s piloting the idea in New Zealand. Perpetual Guardian in NZ has already gotten plenty of ink for championing the idea, having found staff were “more stimulated, empowered and committed after switching … to a four-day, 30-hour work week.” Stress went down, and sense of work-life balance went up.

HEADING INTO DECEMBER– Egypt could be receiving a bn USD Christmas gift courtesy of the IMF. That’s according to Finance Minister Mohamed Maait, who said yesterday that the fund should disburse the second tranche of the USD 5.2 bn standby loan worth USD 1.6 bn at the end of this month.

Israeli Prime Minister Benjamin Netanyahu will make his first official visit to Egypt in almost a decade in the coming weeks to discuss economic ties, reports the Jerusalem Post. Netanyahu’s Egypt visit comes as Israel thaws tensions with Arab countries through normalization agreements with UAE and Bahrain, as well as the spectre of a similar agreement with Saudi Arabia.

The domestic press expects another round of trade talks with the US of A and a meeting of the Egypt-Iraq higher committee as the two countries continue to draw closer. The CBE will next review interest rates on Christmas Eve.

Other key dates for your diary this month: 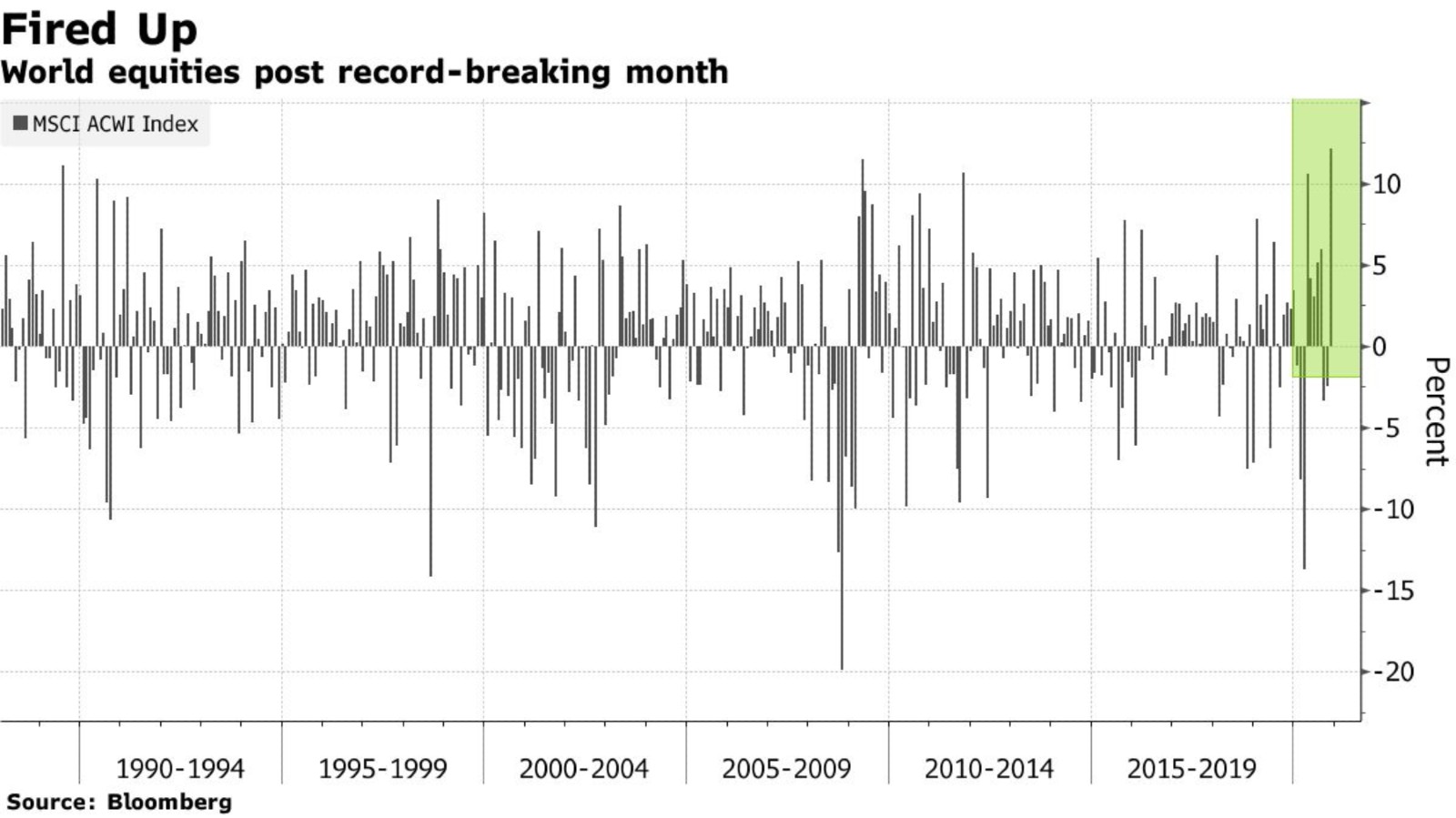 MARKET WATCH- Global stocks had one of their best months ever in November as a constant stream of positive vaccine news, the election of Joe Biden and easy monetary policy had investors piling into stocks. Seeing the biggest gains since 1988, this was the month that the stock rally began to broaden beyond Big Tech to include sectors previously battered by the pandemic, such as energy and industrial firms. The rally coincided with a 2.5% drop in the USD, its biggest monthly decline since July against other currencies. Bloomberg tracks the month in graphs.

The Egypt Economic Summit will take place tomorrow at the St. Regis Hotel in Cairo. You can learn more about the event here.

It’s a big weekend coming up for art lovers: The Cairo Art Fair kicks off on Friday and runs through 31 January. Tap / click here for full details and a list of participating artists.