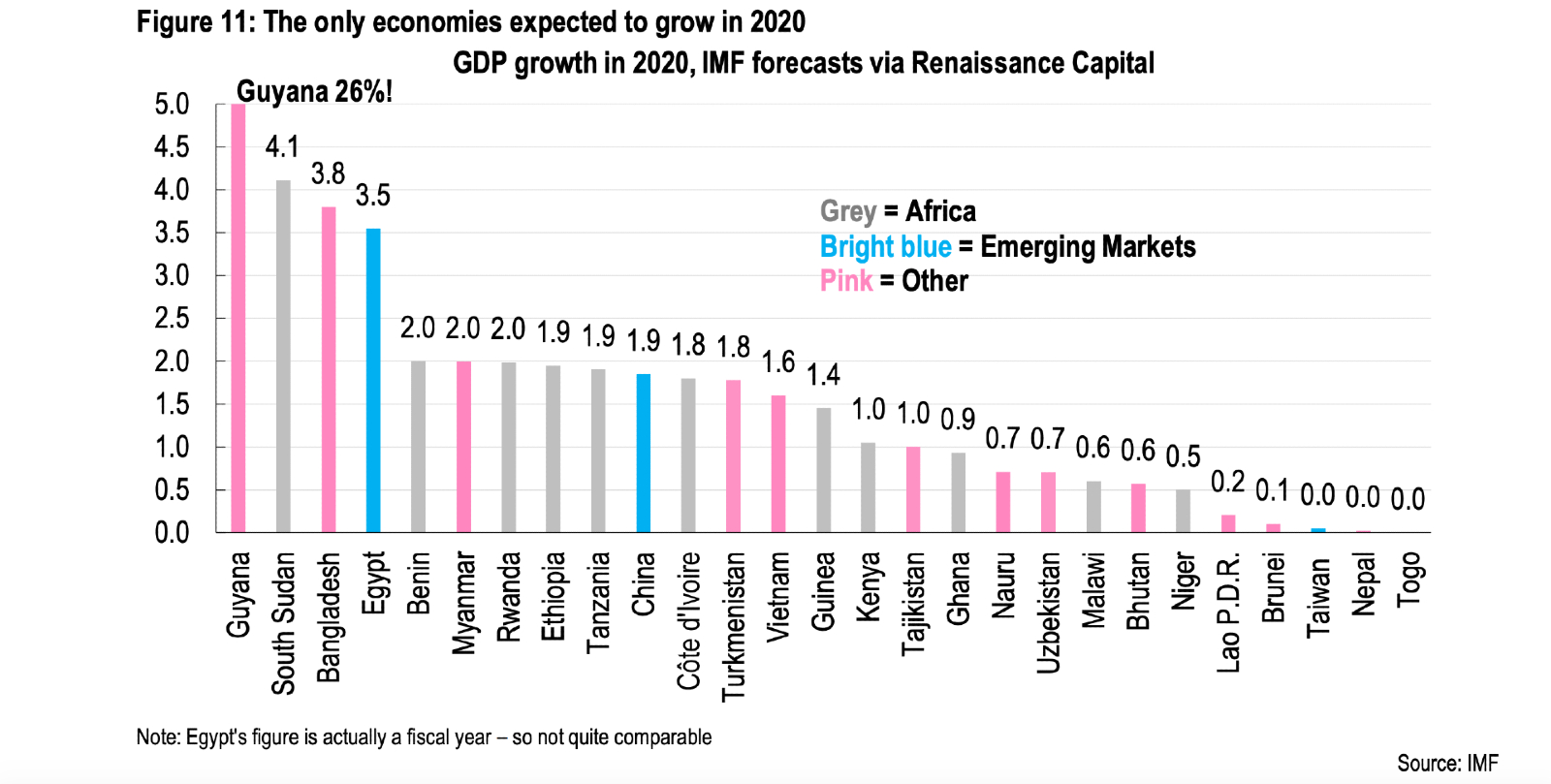 RenCap bullish on Egypt, sees EM portfolio inflows gaining momentum: The benefits Egypt is reaping from its fiscal reform program — including turning a primary budget surplus and engaging the IMF — are keeping Renaissance Capital bullish on the economy, the investment bank said in a report last week. RenCap also sees an improving debt-to-GDP ratio on the horizon as the Central Bank of Egypt (CBE) continues enacting rate cuts next year. “Moreover, we think the education / electricity fundamentals are in place to help Egypt accelerate GDP growth,” the report says.

Egypt’s economic outlook, by the numbers: RenCap expects real GDP growth to clock in at 3.5% at the end of the calendar year and dipping to 2.8% in 2021 before roaring back to 5.0% in 2022. RenCap doesn’t appear to expect another rate cut when the CBE’s Monetary Policy Committee meets for the last time this year in December, saying in the report that we will close out the year with interest rates where they are. We should, however, expect rates to be cut by 150 bps in 2021 and remain at around 7-8% through 2022. Inflation, meanwhile, is expected to dip marginally to 5.5% in 2021 from 5.6% at the end of this year. Unemployment is also expected to tick up over the next two years, holding steady at 9.7%, the report suggests.

As for emerging and frontier markets, expect the incoming Biden administration to bring good things — and a weaker USD: The Trump administration encouraged US companies to bring their businesses back home — reversing FDI flows that had gone towards emerging and frontier markets — by offering tax incentives and creating trade tensions that made it risky for companies to take their business offshore. The general expectation is that president-elect Joe Biden will de-escalate many of these tensions and help drive FDI back to EM and FM in 2022. “We think this will contribute to EM FX strength, helping suppress inflation and interest rates and encourage more bank lending and investment. Faster growth will result, attracting more money to EM” and weakening the USD, the report says.

The weakening USD will also be driven by portfolio flows, particularly with low yields on developing market debt. “This is partly explained by the demographic induced savings glut and because with high DM debt ratios, any rise in [US Treasury] yields would risk sending economies back into recession (thereby reducing yields).” Emerging markets will likely attract portfolio investments in FX and local currency debt, reversing the massive outflows they sustained earlier this year as the pandemic took hold.

What about that “wall of debt” EM and FM are supposed to be concerned about? RenCap says that debt is actually not a concern for emerging and frontier markets and that, if anything, “governments should borrow like they have never borrowed before” in the coming decade. The investment bank expects to see interest rates in these markets falling, while debt servicing costs may not rise even if debt-to-GDP ratios rise more than previously seen. “While Egypt or India do have high debt, it is mostly in local currency and mostly financed by locals,” meaning their external debt is not “worrisome.”