A look at Egypt’s most polluting sectors 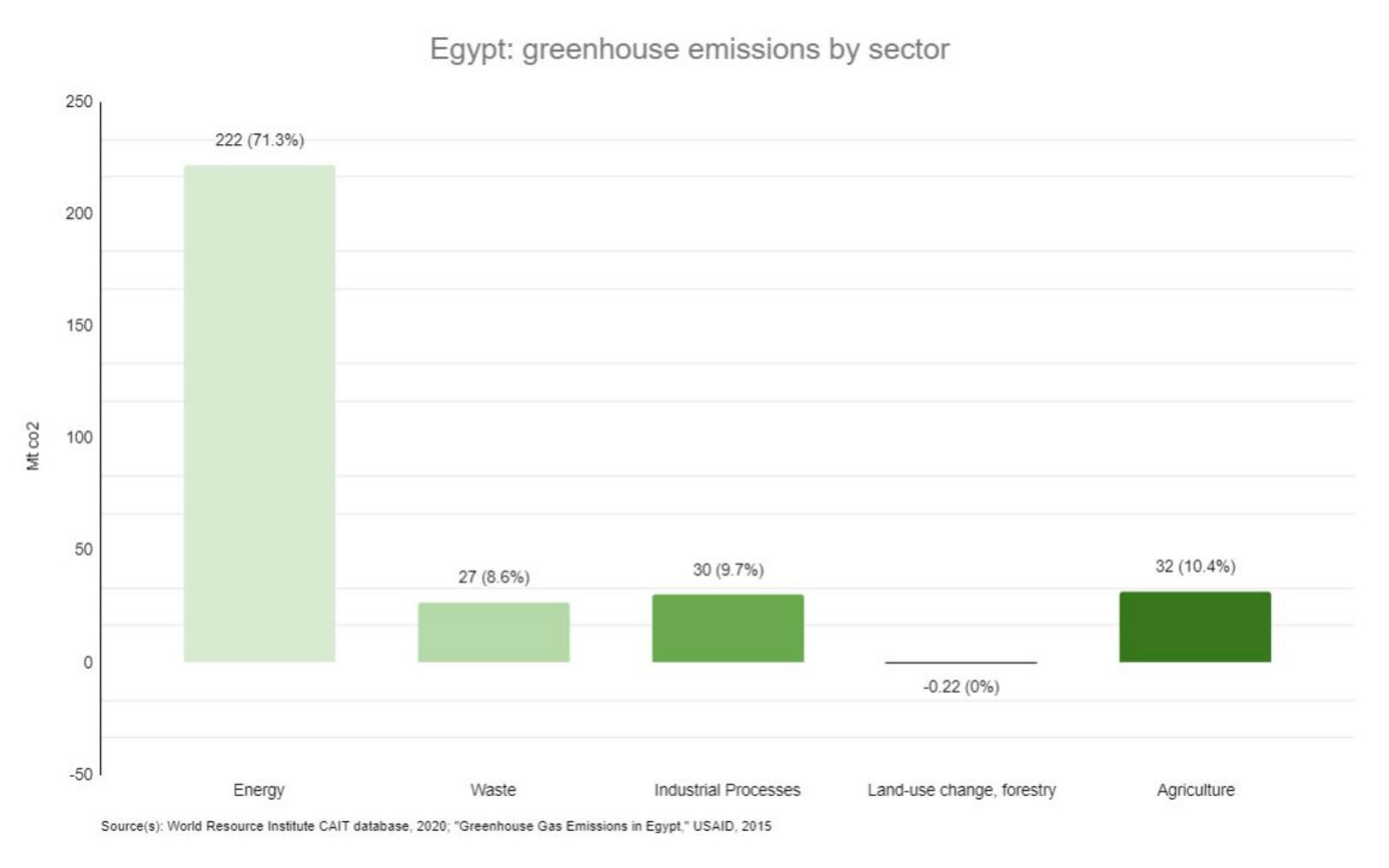 CLIMATE WATCH- A look at Egypt’s most polluting sectors: We noted last week how Egypt is looking to expand the use of green bonds to help finance its green infrastructure framework. The framework is expansive, covering sectors such as clean transportation, renewable energy, pollution prevention and waste management, energy efficiency, and water and wastewater management. While we wait for the government’s Green Finance Working Group to come up with the specific projects, we thought it would be useful to try to tally how much carbon is being emitted in Egypt and what are our most polluting industries in terms of carbon emissions. To make the comparative analysis, we pooled data from government and leading international institutions. We focused on 2016 data as these were the most recent widely available year on record for Egypt.

How has our position changed over time? Egypt’s total emissions grew 140% between 1990 and 2016 (pdf), good for a compound annual growth rate of 3.5% each year. Egypt’s total emissions growth over the period was more than three times faster than the global average, but our GDP over the last two decades grew at a faster rate than our emissions, suggesting an improving carbon footprint over the past several years, USAID calculated in a 2015 report (pdf). 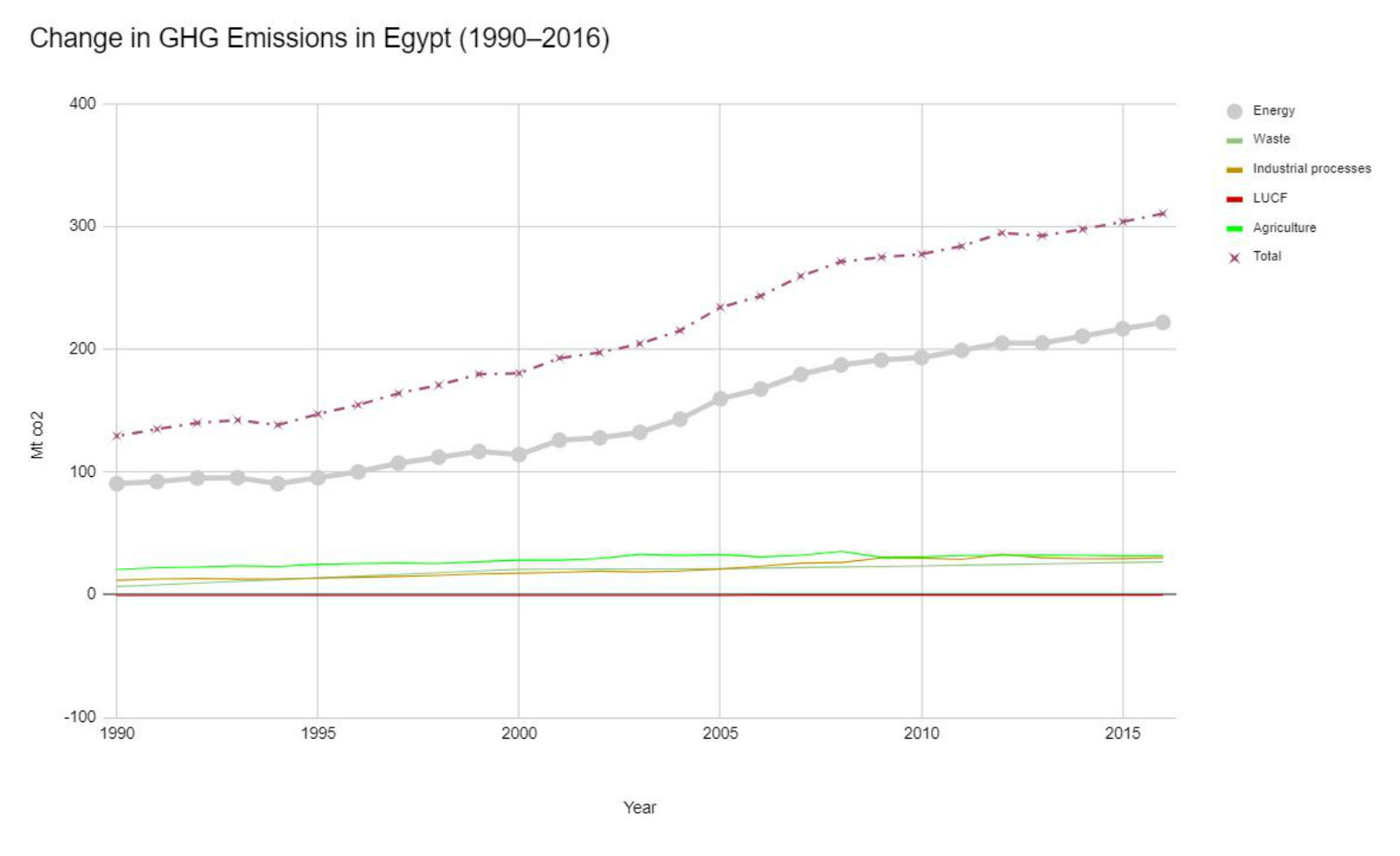 The biggest contributor to emissions is the energy sector: Energy was responsible for 71.4% of 2016 emissions in Egypt, producing a little over 221 Mt CO2. Electricity and heat production contributed the most (45%) of all activities within the energy sector. Transportation (25%), manufacturing and construction (20%), other fuel combustion and fugitive emissions (9%), and bunker fuels (1%) were responsible for the remainder. Emissions from Egypt’s energy sector grew a moderate 3.5% from 1990-2016. It’s worth noting that energy also beats out other sectors globally as the biggest contributor to climate change. In 2016, the use and combustion of fossil fuels — which include coal, oil, and natural gas — created almost three quarters of the world’s greenhouse gases.

Egypt is heavily reliant on hydrocarbon-based fossil fuels, with renewable sources only accounting for 3.4% of the country’s energy mix last year. Electricity produced from natural gas alone is estimated to account for 70-75% of our energy mix, according to World Bank data from 2015 and Fitch Solutions data from 2020. This resulted from growing natgas reserves and the government prioritizing fossil-fuel electricity generation to fight the spell of continued energy blackouts between 2011 and 2013. Eventually, we turned from having a shortage in electricity to a surplus, but this created a market heavily reliant on oil and gas.

Dig deeper into the nuances of our renewable energy policies: In a three-part series we looked at how the covid-19 crisis and oil price changes have impacted the transition toward renewable energy and explored what policymakers can do to accelerate the shift. Part one probed into the impact of the lockdown, part two into what the collapse of oil prices means, and part three an inherent overcapacity problem in electricity generation that was made worse by covid-19.

Beyond energy, the second-biggest cause of greenhouse gas emissions is the agriculture sector — which accounted for 32 Mt CO2, or 10.2% of our 2016 total. Emissions from agriculture only increased by a slight 2% from 1990-2016, as the sector’s contribution to GDP decreased over time. In 2016, agriculture made up 11.8% of Egypt’s GDP. The sector’s contribution hasn’t changed much since then, falling only slightly to 11.05% in 2019. However, the contribution of agriculture fell considerably from close to 30% in 1960, and nearly 20% in 1990, as Egypt moved toward becoming a more industry- and service-oriented economy, World Bank data showed.

Manufacturing is the third-largest contributor to emissions: Manufacturing and industrial processes collectively emitted 30 Mt CO2, or approximately 9.7% of Egypt’s total, in 2016. Particular culprits include the production of minerals, chemicals, metals, pulp and paper, food and beverages, halocarbons, aerosols and solvents, semiconductor and electronics, and electrical equipment, as well as the use of refrigeration and air conditioning, according to Climate Watch Data. Manufacturing was the second fastest growing source of emissions in Egypt between 1990-2016, growing 3.8% during that period.

Waste handling and management, meanwhile, was the fourth biggest source of greenhouse gas emissions, accounting for 27 Mt CO2 in 2016 (8.6%). Greenhouse gases are produced from waste when waste is landfilled and disposed of rather than recycled. While it is only ranked fourth, waste emissions grew 5.6% between 1990-2016, indicating that our recycling has not been growing at the same pace as our waste generation.

What’s the government doing about this? Egypt’s House of Representatives in August approved a proposed law to set up an authority to oversee and monitor waste management. The authority would be in charge of encouraging industry growth and outlining a national strategy to manage agricultural and industrial waste. In terms of spending, the government allocated EGP 10 bn to waste management through 2024, Environment Minister Yasmine Fouad said in September.