Good morning, friends, and welcome to a new workweek. We hope your long weekend was as relaxing as ours was. It’s a light news day as we get back into the swing of things. Bonus: We have another long weekend the week after next as the nation observes the Prophet’s Birthday on Thursday, 29 October.

Set to dominate headlines this week: The IMF and World Bank’s (virtual) annual meetings, which kick off tomorrow and run until Sunday 18 October. The meetings, headlined “Supporting a Resilient Recovery,” will also focus on human capital, digital development, and poverty. Look for a coordinated response to covid-19 to be on the agenda.

Two chapters of the IMF’s carefully read World Economic Outlook are already out, covering the economic impact of “The Great Lockdown” and how to mitigate climate change. The WEO is typically published twice a year.

A two-day Regional Forum for Medical Insurance and Healthcare kicks off here at home today, where private and public sector players will gather to discuss health challenges amid the pandemic, according to Youm7. The forum is organized by the Insurance Federation of Egypt.

There’s just a week of campaigning left before voters go to the polls to elect a new House of Representatives. The campaign period will end next Sunday, 18 October — three days before expats from 14 governorates cast their ballots in the first round of voting on 21-23 October. The polls open for voters here at home on 24-25 October. Check out our calendar for a refresher on who votes when.

IT’S ALSO A BIG WEEK FOR: Gadget nerds. Apple will unveil as many as four new iPhones on Tuesday at its virtual “Hi, Speed” event, which you can stream live here. The business press is excited (WSJ | FT). Meanwhile, Nikon will until its much-awaited Z6 II and Z7 II mirrorless cameras on Wednesday — Nikon Rumors has an updated rundown on what you can expect.

And Fujifilm will unveil its X-S10 midrange mirrorless camera this week — it leaked over the weekend.

AND FOR SQUASH NERDS: The CIB Egyptian Squash Open kicked off yesterday and runs through Saturday at the New Giza Sporting Club and the Pyramids of Giza. It’s the first “platinum” level tournament since the PSA World Tour returned after a six-month break thanks to covid-19. Check out coverage on The Squash Site as well as the Egyptian Squash Federation’s site.

The Health Ministry reported 125 new covid-19 infections yesterday, up from 106 the day before. Egypt has now disclosed a total of 104,387 confirmed cases of covid-19. The ministry also reported 11 new deaths, bringing the country’s total death toll to 6,040. We now have a total of 97,643 confirmed cases that have fully recovered.

Covid has never gone away — we’re still in the first wave. That’s what Hossam Hosni, the head of the Scientific Committee to Combat Coronavirus, told talkshow host Sayed Ali, stressing that Egypt should look to the second wave now sweeping Europe as a warning. Hosni urged citizens to continue adhering to precautionary measures, especially as we head into flu season. While covid-19 has mutated to become less severe, he said, it is very contagious (watch, runtime: 5:54).

How bad are things in Europe? Grim enough that pundits are talking about the economic gains of this past summer now being erased. Canada is also in the midst of a second wave, with new restrictions coming into effect in Toronto, Ottawa and Peel.

No tourists visiting Egypt have tested positive for covid-19 in the past three months, according to Tourism Minister Khaled El Anany. Tourism has begun to slowly rebound since international flights resumed in July, with some 250k tourists visiting Sharm El Sheikh and Hurghada between July and mid-September.

Saturday marked the largest number of daily international and local flights operated by EgyptAir since the resumption of air travel, with 60 flights landing in 47 destinations, according to Youm7. This came a day after EgyptAir resumed flights between Alexandria and Dubai while also adding additional weekly flights to Muscat, Johannesburg, Kigali, and Entebbe. Meanwhile, Alexandria Airlines is set to resume flights between Cairo and southern Yemen this week, according to the National.

Citizens can now register their water meter readings online via an app to reduce footfall at customer service centers, according to a cabinet statement. The My Reading app is available in Arabic on Android and iOS. The Holding Company for Water and Wastewater had previously launched a separate app (Android | iOS) for online water bill payments, which was made available to residents of Cairo, Giza, Menoufia, Beheira, Kafr El Sheikh, Sohag, Alexandria, Red Sea, Matrouh, and South Sinai as a first phase and will be rolled out across the rest of the country in later stages.

The pandemic will likely push another 88-115 mn people — over 1.4% of the world’s population — into extreme poverty in 2020, setting us back to 2017-era levels of poverty, the World Bank said on Wednesday. The proportion of the global population living on less than USD 1.90 a day is expected to increase for the first time in two decades, hitting 9.1-9.4%. Pre-covid forecasts had the rate falling to 7.9% this year.

Meanwhile, the UN World Food Programme has been awarded the 2020 Nobel Peace Prize “for its efforts to combat hunger, for its contribution to bettering conditions for peace in conflict-affected areas, and for acting as a driving force to prevent the use of hunger as a weapon of war and conflict.”

The Sveriges Riksbank Prize in Economic Sciences in Memory of Alfred Nobel will be announced tomorrow.

Davos 2021 won’t be held in Davos: The 2021 World Economic Forum (WEF) will take place in Lucerne, Switzerland instead of its usual hub Davos, the forum announced on Wednesday. The WEF had already been forced to push the summit to early summer due to covid-19 and announced last week that it will take place on 18-21 May in the lakeside town. A virtual “Davos Dialogues” meeting will take place during the week of 25 January.

HSBC thinks it’s time for a “great rebalancing” of investor portfolios, including moving away from government bonds and diversifying into commodities such as gold and inflation-linked bonds amid signs that the global recovery is starting to slow, CNBC reports, citing HSBC Global Asset Management’s quarterly outlook.

The US stock market’s biggest rally in three months has left analysts scratching their heads: The S&P 500 climbed 7.4% this past week, leaving observers struggling to explain the market’s buoyancy in the face of a pandemic and a presidential election, Bloomberg reports. Pundits have pointed to possible explanations, including an expected presidential victory for the Democrats, investors remaining in “buying mode” as equity purchases remain tried and true with stable yields thanks to Fed support, and indexes bouncing back from tech-led tumbles in September.

Saudi’s sovereign wealth fund is looking to snap up an undisclosed stake in Abu Dhabi-based retailer Lulu Group and is in early-stage talks with founder Yusuff Ali, according to Hapi Journal, citing two sources close to the talks. One of the Middle East’s largest retailers, Lulu is already a significant investor in Egypt and plans to spend USD 1 bn to expand its operations here over the next three years.

US ELECTION WATCH- The Donald made his first public appearance yesterday since his covid-19 diagnosis, addressing supporters at the White House ahead of an anticipated return to the campaign trail this week, Reuters reports. King Cheeto’s physician said he is no longer a transmission risk, but stopped short of giving details of his current medical condition.

The second presidential debate between Trump and challenger Joe Biden has been scrapped after Trump balked at squaring off virtually, the AP reports. 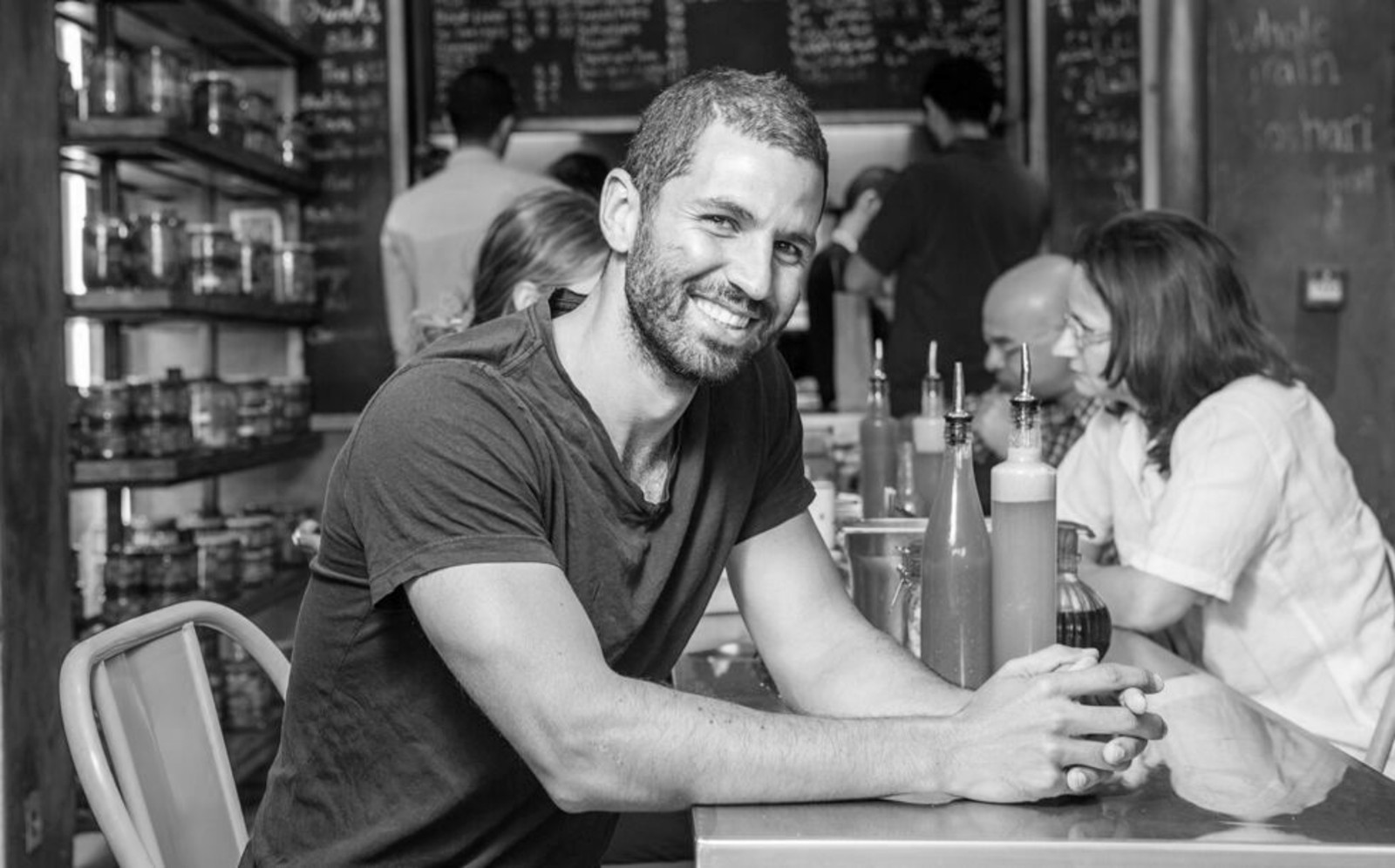 Meet Chris Khalifa, CEO and founder of Zooba, the first guest on season three of Making It, our podcast on how to build a great business in Egypt: Khalifa created Zooba with the aim of elevating Egyptian street food into a culinary export. With seven branches across Cairo, a New York outpost, and a franchise agreement to launch 20 branches in the GCC, the banker-by-training Khalifa turned an idea into a robust brand that has legs globally.

You already have a podcast player on your iPhone, or you can listen to the episode through our website (no download required). We’re also on Google Podcast | Anghami | Omny. Making It is on Spotify, but only for non-MENA accounts.