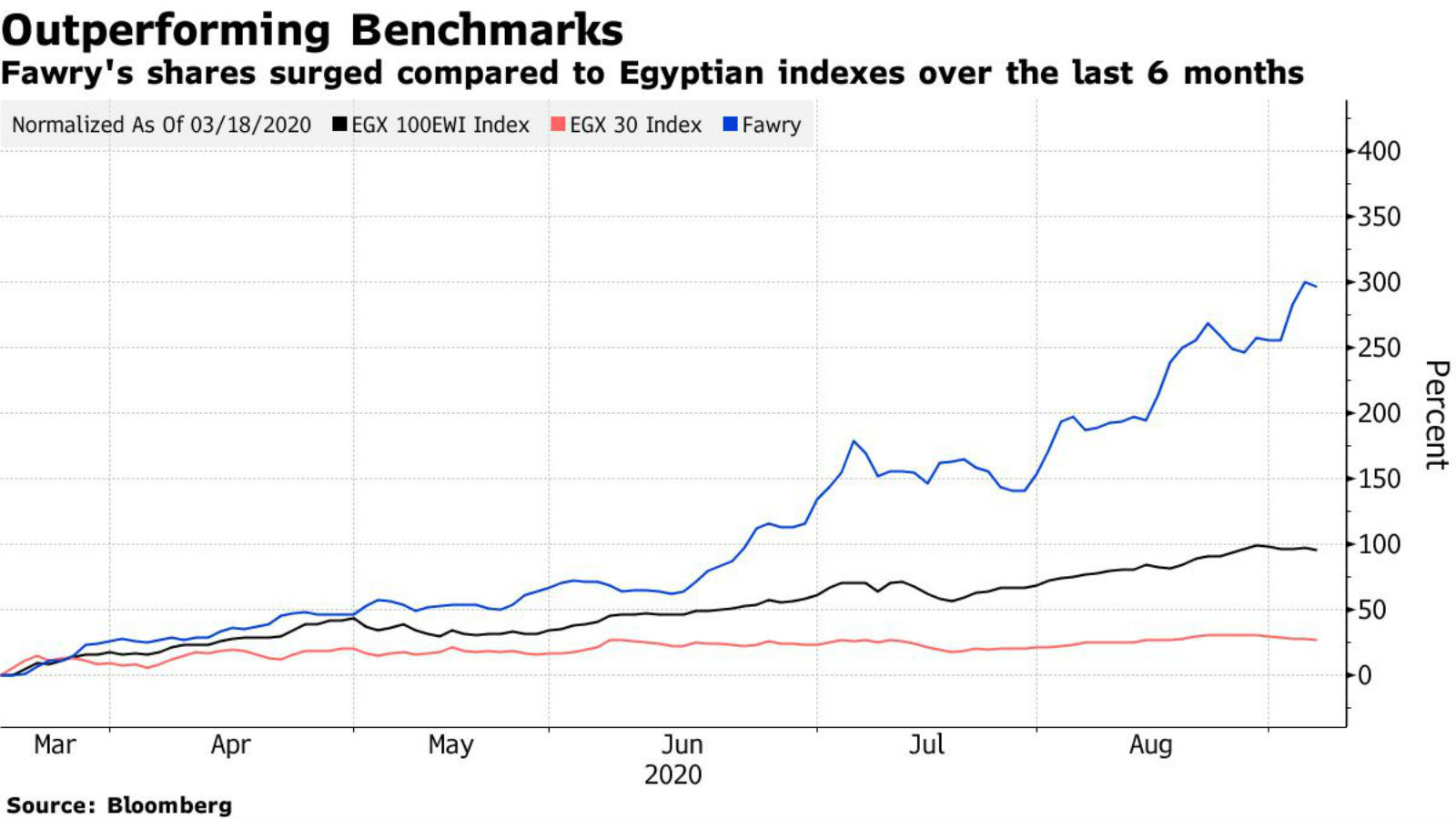 Bloomberg wonders whether Fawry shares are overvalued, asking whether there’s still gas in the tank after a 300% appreciation that has left the stock looking expensive when you consider “the Egyptian firm’s trailing 12-month price-to-sales ratio is 20, about the same as credit-card giant Mastercard, whose revenue is significantly greater and recent profit margin four times higher.” Fawry’s rally has taken its share price to over EGP 27 a share, nearly four times its EGP 7 price in mid-March, leading it to become the first Egyptian tech company to exceed a market cap of USD 1 bn.

Can you put a price on the future? The pandemic has been a boon for the wide-ranging e-payments firm, with profits surging 166% to EGP 70.5 mn and revenues up 47% to EGP 549.3 mn in 1H2020 compared to the year before. But Bloomberg says some analysts don’t see that as enough to justify its EGP 20 bn market value (c.USD 1.3 bn), which places it among Egypt’s 10 largest companies in terms of market cap. Telecom Egypt and Elsewedy Electric, two of the country’s most valuable businesses, have reported far larger quarterly profits and revenues this year than the EGP 70.5 mn generated by Fawry in 1H2020. Other figures, including a high 14-day relative strength index (RSI) that remained well above 70 for the past two weeks, suggest Fawry’s stock price “may have risen too far, too fast,” the business news information service says. A stock is usually considered overbought if its RSI crosses the 70 threshold.

Fawry is poised to benefit as Egypt’s banking penetration rate rises from the sub-sub-basement. World Bank data in 2017 showed that only a third of Egyptians aged 15 and older have bank accounts, with nearly all utility and bill payments made in cash, notes Bloomberg. This comes as the CBE is getting banks to focus their strategies on driving financial inclusion and launching new fintech services. Fawry’s wide presence and first-move advantage will be challenging for newcomers to beat,

What’s more, Fawry’s performance may encourage more investment in the e-payments sector, Azimut Egypt Asset Management managing director Ahmed Abou El Saad says. Already, the National Bank of Egypt is in the process of purchasing a 20-25% stake in Raya e-payments arm Aman and consumer electronics distributor MM Group could soon be the first company to launch a post-pandemic IPO in Egypt when it sells shares in its fintech investment arm as early as 1Q2021. Investor demand for exposure to the sector will increase the valuations of e-payments firms in the pipeline to IPO, Abou El Saad said.