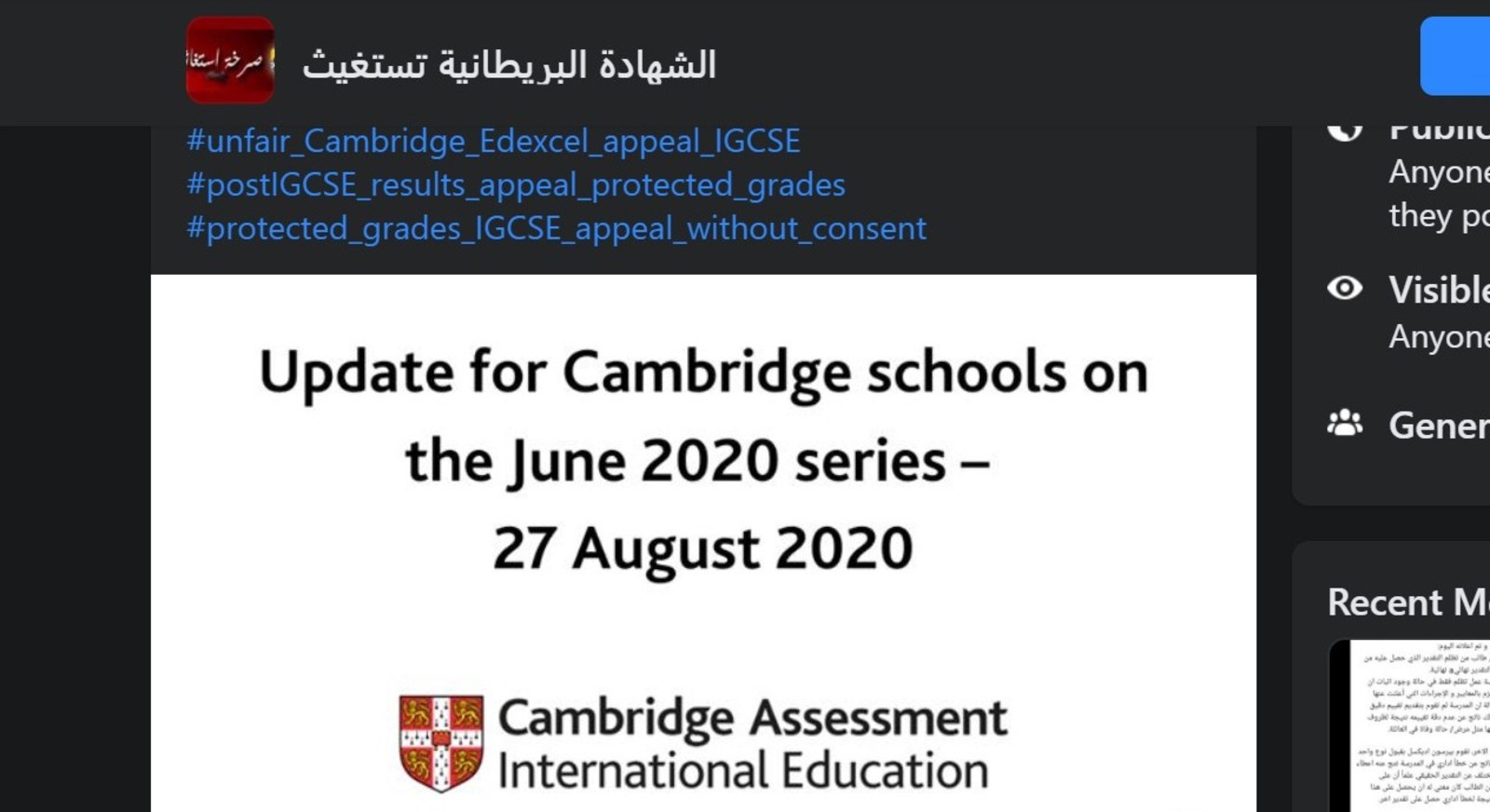 IGCSE controversy hits Egypt, sparking anger among parents: IGCSEs — and Cambridge Assessment International Education (CAIE) — have come under fire from Egyptian parents claiming an algorithm initially used to calculate student grades this year, instead of exams, saw children penalized by an inaccurate system. After widespread outrage, CAIE and other IGCSE exam bodies largely abandoned their algorithms in a dramatic policy reversal, mainly opting to use teacher-predicted grades instead.

The reliability of IGCSE grades was called into question by using, then dropping, the algorithm — and by the teacher-predicted grades themselves. CAIE released more than 950k results on 11 August to nearly 4k schools in 139 countries, according to the Times Educational Supplement. Over 140 schools in Egypt prepare students for IGCSE exams, according to the British Council, which works with UK awarding bodies to offer them.

What happened this year: CAIE cancelled its June exams in March, because of covid-19. This was particularly problematic for grade 12 students who rely on the June 2020 session to sit or resit exams for university applications, says parent Manar Mohammed. Schools were asked to submit predicted grades, supported by evidence like past exam papers, students’ notes or other work already completed, says the deputy principal of one private school in Egypt. “We took this very seriously, and submitted grades we felt fairly represented our students. Some other schools just sent high marks.” Aiming to standardize, CAIE — like other UK exam bodies, the International Baccalaureate, and England’s exam regulatory body Ofqual — applied algorithms that for IGCSEs saw most of the teacher-predicted grades lowered, CAIE revealed. The algorithm also yielded anomalies: many students initially received wildly different results to what they deserved, say parents and teachers.

Why is CAIE bearing the brunt of the anger? CAIE was the first to develop IGCSEs. Though OxfordAQA and Pearson EdExcel also offer them, CAIE IGCSEs remain the most popular in Egypt, say sources. CAIE publishes its IGCSE results earliest, so this year Oxford and Pearson adjusted their grading mechanisms after the backlash against CAIE.

The algorithm was problematic because it generated exceptionally low grades. Globally, strong students predicted A grades often saw the algorithm award them a C or D, the TES reports. Some 15 students out of about 170 saw downgrading by over two grades from the algorithm, while the rest saw slight reductions, slight increases, or no change from their teacher-predicted grades, says the deputy principal. “But there was no pattern, and no way to find out why individuals were downgraded in that way.”

…And relied too much on schools’ past IGCSE track records: It looked at students’ previous work, but was also based on their school’s past results, disaggregated by subject, according to the UK press. Even El Alsson, with a long record of excellent IGCSE results, saw anomalies in new subject areas, where recent data probably wasn’t as strong, says El Alsson’s British School Principal Matthew Topliss. “My issue is that we saw kids downgraded by three grades, to the point that it just wasn’t representative,” he says. “The algorithm seems to stretch out results within a subject based on what it thinks is the school’s historical pattern. So if a school predicted Bs and Cs for a subject in a year group, but three years ago someone got a U, the U is included in the calculations,” says CEO of the UK’s Independent Schools Association Neil Roskilly. This can go both ways: low and high. “So you end up with these weird results.”

There was no external verification: Given 2020’s exceptional circumstances, 10-20% of schools may have had stronger or weaker cohorts of students whose results didn’t fit with the algorithm. They should have been able to show CAIE the evidence it initially asked for, supporting grade predictions that varied widely from the algorithm, Roskilly argues. Instead, many schools say CAIE didn’t even look at the evidence. CAIE declined to comment on this.

The unpopular algorithm has now largely been ditched in favor of teacher-predicted grades, but even that came with its own set of problems, including relying on an honor code. Lack of accountability and pressure to obtain results heighten the temptation by some schools to inflate predicted grades, say both Topliss and the deputy principal. One parent said her son’s school instructed children to use sample answers to past exam papers. The UK considers this malpractice, and a school caught doing it could lose its license to offer IGCSEs, says Roskilly. And not every IGCSE student registered at school in Egypt regularly attends classes, making teacher assessment a challenge, say several sources.

Some feel CAIE has given grade-inflating schools a free pass: Some schools that gave realistic grade predictions, expecting CAIE to have a fair standardization process, will be upset, says Roskilly. They can’t appeal against grades they issued, and they see other schools getting away with sending inflated grades. This may feel unfair to their students, he adds.

The whole process left teachers and parents questioning the integrity of CAIE processes: Uncertainty about grade fairness is calling the value of IGCSEs into question. Mohammed no longer recommends them, and says her views are widely shared. One Facebook group with 11.6k members is calling regularly for appeals against CAIE and peaceful demonstrations outside the British Council.

They feel the value proposition offered by an IGCSE education was undermined, especially given its cost. Parents might pay between EGP 80k and EGP 200k for their children to take IGCSEs, says Mohammed, depending on which subjects the children take and which school they attend.

CAIE should have found other ways to assess students, like offering online exams or holding exams outdoors, as China did, says Mohammed. “They should have looked at the context, and asked individual countries what they’re doing with their national systems. This one-size-fits-all approach didn’t work.”

Why didn’t CAIE just offer online exams? That’s the mn EGP (or GBP) question: CAIE hasn’t directly answered this question. But it asked schools several months ago if they were equipped to hold online exams, says Topliss. If there’s a second covid-19 wave and online exams are an alternative to this year’s approach, they have definite merits, he believes. “But I would be concerned about academic honesty. The technology would have to be pretty special.”

Or in-person exams with safety procedures, as Egypt did with the Thannaweya Amma. Some 670k pupils from state and private schools, and 128k from religious schools, sat the Thannaweya Amma exams in June, amid extra distancing and sanitation measures. The country had a pass rate of 81.5%, with no evidence that holding the exams resulted in more covid-19 cases. Egypt’s national system proved far more resilient and flexible in its assessment than CAIE, says Mohammed.

And big questions remain, including whether university admissions will be affected and whether the future of the IGCSE system is now at risk. “My concern is what this means for the system in future years, and for comparisons with past or future cohorts,” says Topliss. IGCSEs are still the gold standard for education, but this raises the question of whether they are fit for purpose, he believes.