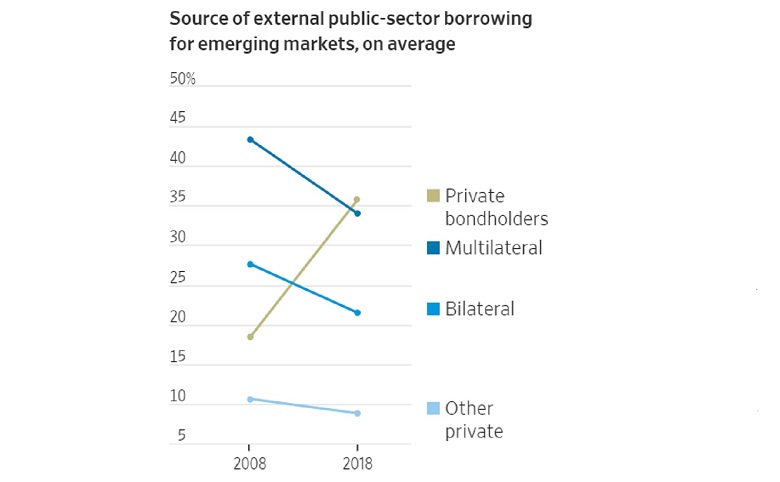 Growing debt piles are becoming increasingly insurmountable for some developing economies as they struggle to find the resources to repay bns of USD borrowed from private investors over the past decade, the Wall Street Journal says. The pandemic has made matters worse, but these countries were already ill-prepared to both service their debts and invest enough into their economies and infrastructure — which is what a chunk of the borrowing was meant to finance.

Debt levels have been soaring over the past decade in sub-Saharan Africa’s poorest countries. By 3Q2019, their debt-to-GDP ratio had swelled to 60% from 38% one decade earlier, the WSJ says, citing figures from the Institute of International Finance. The WSJ looks closely at Zambia, which is seriously strained as it rapidly approaches its 2022 due date to repay FX-denominated bonds it took to market in 2012 when its economy was on the up — largely thanks to its copper resources and China’s massive demand for the commodity. The Southern African country was meant to invest in vital infrastructure, including healthcare, but its borrowing quickly proved unsustainable when China’s economic slowdown drove down copper prices and the Zambian currency tumbled, more than tripling the country’s debt in local currency terms.

It’s not just Africa — Latin America also has a ticking debt bomb in its lap: Debt levels are skyrocketing in Latin American countries struggling to contain the fallout from the pandemic, including Argentina, Ecuador, Chile, Brazil, and Mexico, the Financial Times said. Similar to other emerging market blocs, the LatAm region was already grappling with debt defaults, slow growth, weak healthcare systems, low tax revenues, high levels of borrowing, and an over-reliance on commodity exports before the pandemic broke out.

While the WSJ doesn’t explicitly mention us, Egypt has recently been named among the emerging market economies that are “most vulnerable” to defaulting on sovereign external debt in the next year, along with Zambia, Ghana, South Africa, India, Nigeria, and Brazil. According to Oxford Economics and IMF figures, Egypt has one of the highest ratios of maturing debt and fiscal deficit to GDP among 20 EM peers, standing at around 40%. And while Egypt is much better positioned for a recovery than other EMs, part of the risk we face is being seen as one and the same as our peers as investors look at the entire asset class as homogenous.