Good morning, friends, and welcome to the last business day of the week.

The nation is sliding into a three-day weekend that begins tomorrow as we observe the anniversary of the 23 July Revolution, which will be a paid vacation day for both the public and private sectors, the Manpower Ministry said yesterday. Banks and the stock exchange will be closed tomorrow and will open their doors again on Sunday, the Central Bank of Egypt said yesterday.

We’re also off tomorrow and will be back in your inboxes on Sunday morning.

It’s official — public universities will begin the new academic year on Saturday, October 17 and the first term will wrap on Thursday, 21 January, the Supreme Council of Universities decided, according to a Higher Education Ministry statement. The council also approved the proposal to implement a blended learning system next academic year.

Private school tuition fee hikes capped at 7% -Shawki: Private schools will not be permitted to raise their fees by more than 7% in the coming school year lest the face legal repercussions, Education Minister Tarek Shawki told Ala Mas’ouleety’s Ahmed Moussa last night. Shawki also said next year’s examinations will likely use an “open book” format to emphasize comprehension rather than memorization and will be conducted online (watch, runtime: 21:58).

Universities will transfer more of their curricula online in the coming academic year to reduce footfall on campuses amid the covid-19 pandemic, the local press reports, citing Assistant to the Minister of Higher Education and Scientific Research Hisham Farouk.

Parliament to discuss additional support for tourism next week: Lawmakers will next week discuss the bill that would set up a fund dedicated to providing emergency financial support to the tourism sector, Vice President of the Federation of Chambers of Tourism Assem Wahid said, according to Al Shorouk. We assume that these will be committee-level discussions, given the parliamentary session has been adjourned until the middle of next month.

Are you an Egyptian living abroad? You can vote by mail-in ballot for the first time, it seems, rather than lining up to vote at the nearest Egyptian embassy or consulate to cast a ballot for then nation’s first Senate elections, National Elections Authority chief Lasheen Ibrahim said, according to Masrawy. You’ll need to register if you want to vote by mail. Do so between Saturday, 25 July and Friday, 31 July on elections.eg to be eligible to later download your ballot and participate in the 9-10 August poll for citizens living abroad. Mail in ballots will need to be sent via courier or express mail to meet the 12 August cutoff to be counted. Voters in Egypt go to the polls 11-12 August.

It’s time to take a sabbatical. Lawyer, author, podcaster and inveterate iSheep David Sparks recently wrote about his experience planning and taking a one-week sabbatical from work. In true workaholic fashion, Sparks doesn’t explain why he he’s talking about a “sabbatical” and not a “vacation,” but what he’s talking about is a break that (a) is more “vacation” than a typical academic sabbatical (in which you’re expected to spend a six months or a year engaged in research, writing or otherwise ruminating on matters professional while being relieved from your daily teaching duties), but still (b) includes more thinking about the future of work than one would normally do on a vacation.

How did it work out? Execs at all levels can learn from his conclusion that whatever qualms he may have had about his (kind of) week off, “I am going to build these slow weeks into my schedule going forward, though I am not exactly sure how often, or what I will call them.”

When was the last time you purposefully booked a slow week? Not a crazy four-day week so you can get a long-weekend on the coast. But a slow week at the office that gave you ample time to think about strategy, your business and what you want out of your career and life?

The Health Ministry confirmed 676 new cases of covid-19 yesterday, bringing the country’s total infections to 89,078. There have now been 4,399 deaths after the ministry reported 47 new fatalities yesterday — the lowest daily death toll since 12 June. We now have a total of 29,473 cases who have fully recovered.

The Red Sea and South Sinai governorates have reported zero new covid-19 cases for a full day, a first since the outbreak of the pandemic, the Health Ministry said in a statement. Nine of 21 medical centers in Beheira governorate also reported no new cases for the first time, Al Masry Al Youm reports.

Covid shaved 5.7% off Egypt’s non-oil exports in the first six months of the year, with export sales down to USD 12.3 bn in 1H2020 according to figures from the General Organization for Export and Import Control. Egypt’s largest export market during the first half of the year was the Arab world, followed by the European Union.

Demand for so-called “immune boosters,” vitamins and nutritional supplements has dropped by 80% m-o-m so far in July as citizens feel less anxious about covid-19 according to an official at the Cairo Chamber of Commerce. 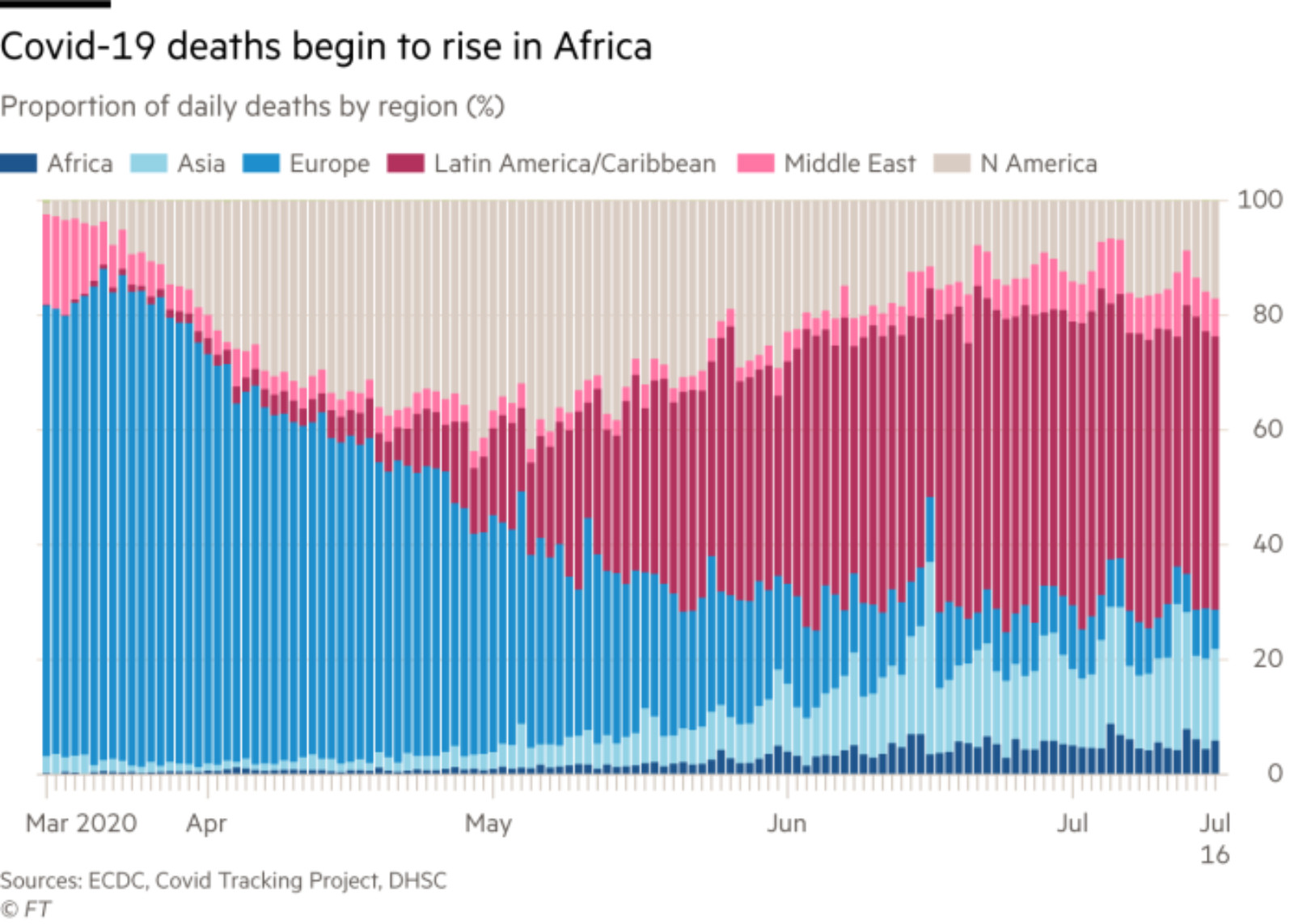 The virus may appear to be starting to wane in Egypt, but it is taking hold in Africa: Although initially being concentrated in five countries on the continent, cases of coronavirus have more than doubled in 22 nations in the past month while two-thirds are now seeing community transmission, the Financial Times reports.

Early trials from at least three vaccine developers are showing positive results in raising antibody count in the short term, but there remain questions about whether they will successfully provide widespread protection for a range of demographics, according to the NYT. Antibodies are reaching levels near those seen in recovered covid-19 patients in results from partnerships between Oxford University and AstraZeneca, China’s CanSino Biologics, and a JV between Pfizer and German BioNTech, but building real immunity to the virus will likely require a second dose of its vaccine.

We’re not entirely sure if Moscow also has a vaccine ready as conflicting statements emerged from the Russian defense and health ministries. While the country’s defense ministry claims to have a vaccine ready with plans to produce 200 mn doses with foreign partners by the end of this year, the health ministry denied that the trials are complete, according to the Moscow Times.

Have you had covid? You may only be immune for two-and-a-half months after catching it, according to a new study which finds that the half-life of covid-19 antibodies is just 73 days, Bloomberg reports.

Moderna execs are certainly not letting a good crisis go to waste: Executives at the US giant made mns dumping company shares in the days after it announced a breakthrough in its research for a vaccine, CBS News reports. CEO Stephane Bancel more than tripled the amount of shares sold through his executive stock plan after its share price surged 30% in May, netting him almost USD 4.8 mn. 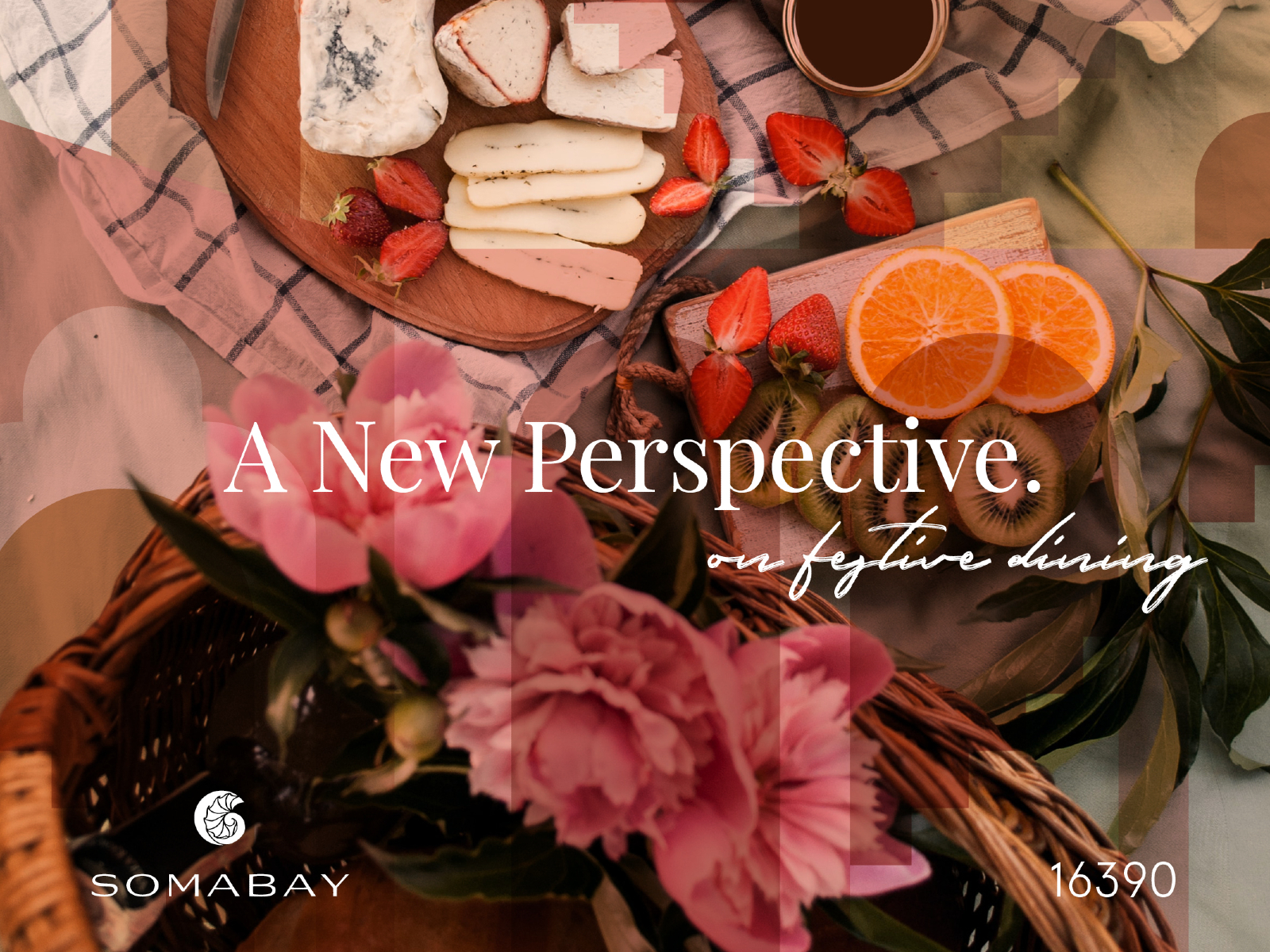 EU agrees landmark stimulus package: EU leaders yesterday inked a EUR 750 bn (USD 860 bn) economic stimulus program after days of fraught negotiations that pitted hawkish northern countries against the corona-ravaged Mediterranean economies, Bloomberg reports. Following a night of talks, leaders agreed to disperse EUR 360 bn of low-interest loans and EUR 390 bn of grants to the hardest hit nations, one of the key sticking points for the so-called ‘frugal four’ countries which were concerned about the size of the package. In what EU president Charles Michel called a “pivotal moment” for the bloc, the agreement unlocks funds desperately needed by the highly-indebted southern economies wracked by the pandemic and sends a message that European nations are capable of acting in concert during times of crisis.

News of the agreement and covid-19 vaccine optimism spurred a leap in oil prices, with Brent crude up to USD 44.53 / bbl, on track for its biggest daily rise since mid-June at 3%, Reuters reports. Oil traded at closer to USD 60 / bbl before the pandemic took hold. Italian bonds and European stocks also gained yesterday, market data shows. European equities have outperformed US and global shares since the stimulus package was first announced in mid-May.

Over in the US, traders are asking: “What pandemic?” US stocks are continuing their stunning liquidity-fuelled recovery, with the S&P 500 turning positive year-to-date during Monday’s trading session, CNBC reports. Amazon shares surged 7.9% after a Goldman analyst raised the price target on the stock to USD 3.8k per share. The uptick added USD 13 bn to Jeff Bezos’ net worth.

But the market is increasingly resembling the 1990s tech bubble, bn’aire investor Mark Cuban told CNBC. “In some respects it’s different because of the Fed and the liquidity they’ve introduced and the inflation for financial assets that comes with that. But on a bigger picture, it’s so similar,” he said.

European banks are at risk of losing EUR 800 bn in non-performing loans as revenues plummet this year, the FT reports. A report by US consultancy Oliver Wyman sees junk debt more than doubling to EUR 400 bn if its base scenario — a drawn-out recovery that avoids a new round of lockdowns. “The pandemic is unlikely to cripple the sector” but banks will be “highly susceptible” to further instability and will clamp down on lending activity, said Christian Edelmann, co-head of European financial services at Oliver Wyman.

Saudi Arabia’s Al Othaim family is said to be looking to IPO its malls unit on the Tadawul, Bloomberg reports, putting the value of the transaction at up to USD 2 bn.

Private equity heavyweights are looking to Europe as the coronavirus continues to haunt the US. PE firms announced agreements worth USD 143 bn outside of the US during the first six months of the year, accounting for almost 60% of global total, according to data collected by Bloomberg. If the trend continues for the rest of the year, it will amount to the highest proportion in almost 20 years. In a further sign that the US has lost its luster for the biggest in the industry, there were no US businesses in the five biggest agreements for the first time since 2003. 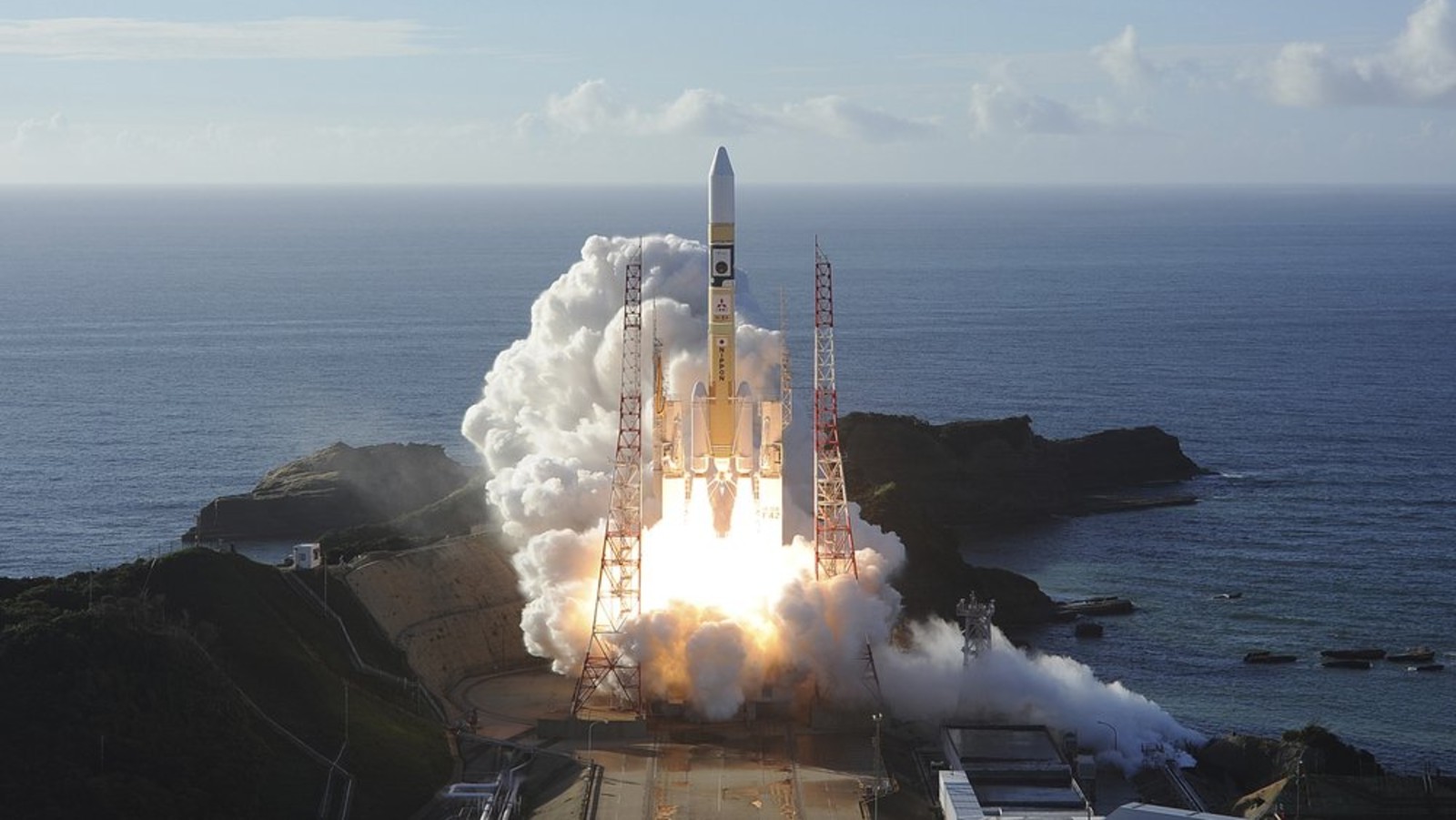 (xxYE) The UAE launched its first ever Mars-bound spacecraft earlier this week, marking the Arab world’s first interplanetary space mission, the Associated Press reports. The spacecraft, Amal, was constructed in Boulder, Colorado by a group of Emirati and US scientists and took off from a Japanese launch site on Monday. Set to reach the red planet in seven months, Amal will be monitoring climate change while circling Mars for two years.