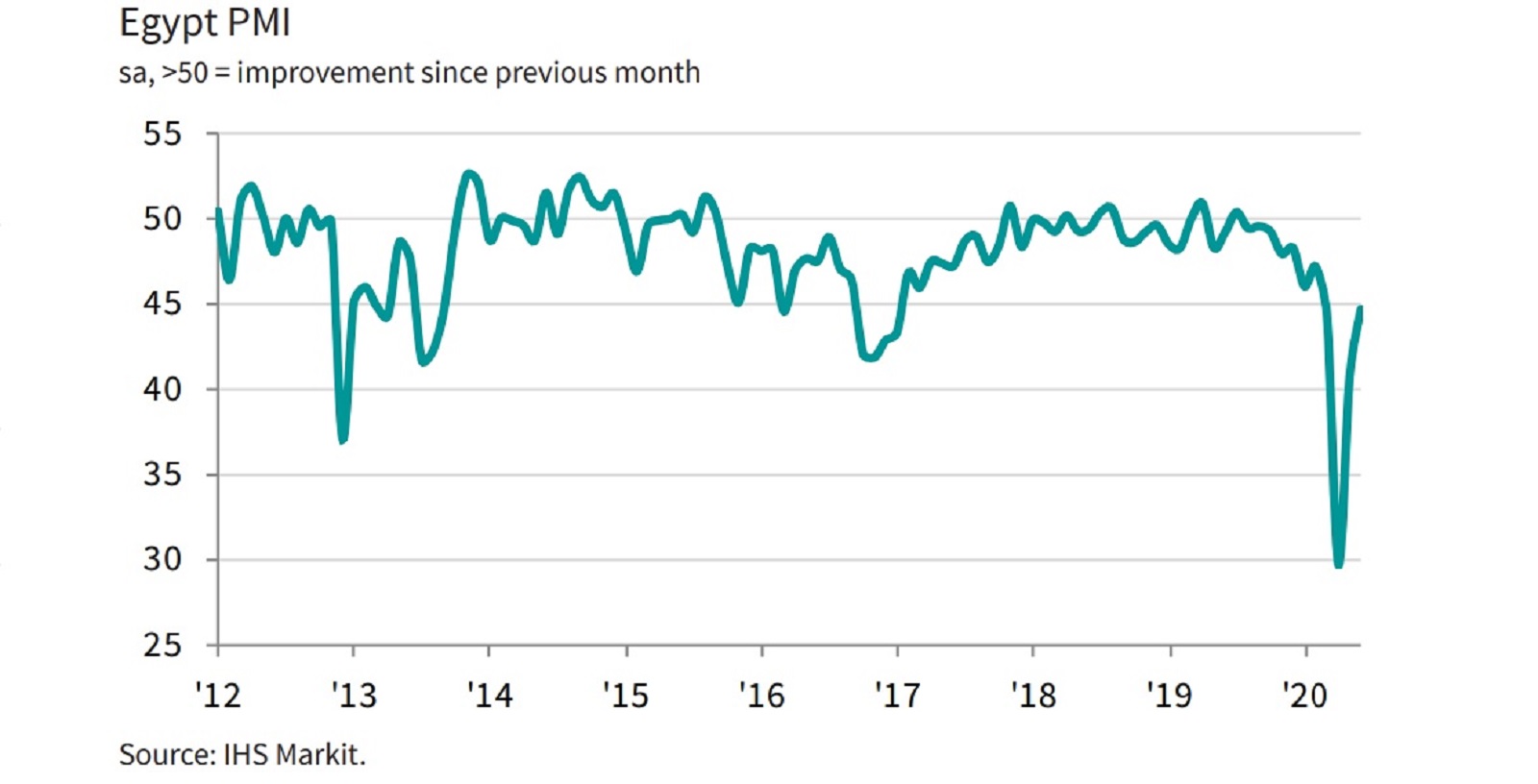 Business activity in Egypt began to stabilize in June after the calamitous plunge in May that came with the country’s covid lockdown, according to IHS Markit’s purchasing managers’ (PMI) index (pdf). Four months into the pandemic, business conditions in Egypt’s non-oil private sector remained uncertain in June: improving output and orders helped the PMI gauge edge up to 44.6 from 40.7 in May. That’s the highest reading seen since the Sisi administration introduced lockdown restrictions in March, but job losses accelerated to their quickest pace in four years. PMI readings above 50 suggest business activity is growing, while a reading below points to a slowdown.

Signs of stability: “June's PMI data gave some promising signs that the Egyptian economy is beginning to stabilize. Activity fell at the weakest pace in four months, supported by a similar easing to the decline in new business, said David Owen, economist at IHS Markit. The index collapsed to a record low of 29.7 in April, as business activity ground to a halt due to the lockdown.

Output and new orders rose to four-month highs but continued to decline due to weak demand and activity. Output got a boost as firms reported higher working hours and new orders from clients as the lockdown eased, but private sector activity remained sluggish mainly due to restrictions on tourism and travel.

There are indications that this could soon change: “Employment numbers still fell at an accelerated rate in June, although multiple signals suggest this will soon change,” Owen said. “Higher demand at some companies, increased backlogs and sentiment rising to a six-month high all point to firms hopefully restarting hiring in the near future.”

Purchasing activity: Firms continued to report a drop in purchasing activity, albeit at a slower rate than in May. However, some respondents were still suffering supply chain disruptions, with slower delivery times due to the curfew and port delays. Pricey medical materials and the appreciation of the USD led to a sharp increase in input costs. This combined with a sharp rate of inflation led to “a renewed uptick in overall cost pressures.” Output charges, meanwhile, dropped for again as firms continue to offer discounts to attract customers.

Outlook: Optimism for the future is now at the highest level so far in 2020. Businesses hope the gradual return of life will boost private sector demand and support employment going forward.