…And we’re back, ladies and gentlemen. We hope all of you enjoyed the past nine days off as much as we did — and are enjoying the simple pleasure of facing a new workweek with a cup of coffee in hand. We have a stacked issue for you this morning, so let’s get started.

Need a refresher on where we left things before the break? Understandable, given we just had what’s likely to go down in history as the longest Eid El Fitr holiday ever. The big stories before we all shifted our brains into neutral were:

We were at the peak of earnings season just before the break, with EFG Hermes (pdf), Orascom Construction (pdf), Sarwa Capital (here) and Talaat Moustafa Group (pdf) all reporting 1Q2020 financials

The total number of reported covid-19 cases is up 65% since we last wrote you on 21 May.

Curfew now runs 8pm-6am as of yesterday, as the authorities ease the more restrictive 5pm-6am. The curfew is presently in effect until mid-June.

Everyone now has to wear a mask in closed public spaces and on all public transport for the next two weeks under new guidelines issued by Prime Minister Moustafa Madbouly the week before Eid. This means shops, malls, markets and banks, workplaces and government offices. Cabinet spokesman Nader Saad said last night that the requirement does not extend to drivers in their personal automobiles, whether they are alone or with other passengers.

Don’t want to wear a mask? Get ready to fork over an EGP 4k fine.

Do masks work? Yes. Why do you think surgeons and nurses wear them in operating theaters? While they provide a small measure of protection to the wearer, they’re very effective in protecting all of the people around you from … you.

So, what’s open and when?

Banks reopen today from 9:30am to 3pm, while employee hours will run from 9am to 4pm, according to a Central Bank of Egypt statement (pdf). Federation of Egyptian Banks head Mohamed El Etreby wants bank hours to go back to a full eight-hour work day, saying that keeping operating hours crunched results in more footfall and congestion at banks, reports Hapi Journal.

The EGX is also back today. The trading session begins at 10am and the closing bell will ring at 2:30 pm — one hour later than during Ramadan, according to an EGX statement (pdf).

The Interior Ministry is reopening as of tomorrow for passport issuance and work permits, according to a statement.

Misdemeanor and appeals courts partially reopened yesterday across the country to hear appeals and announce verdicts in family, civil and college cases, according to the local press. Courts are expected to fully reopen on 13 June.

The Coptic Orthodox Church will look into the potential resumption of services at the end of June, the church said yesterday. The government has said it plans to allow houses of worship to gradually reopen as of mid-June, with limited prayers and ceremonies allowed.

EgyptAir is operating a special flight to Frankfurt from Cairo this Tuesday for German citizens and EU residents, the national flag carrier said.

Key news triggers coming up as we begin a new month tomorrow: 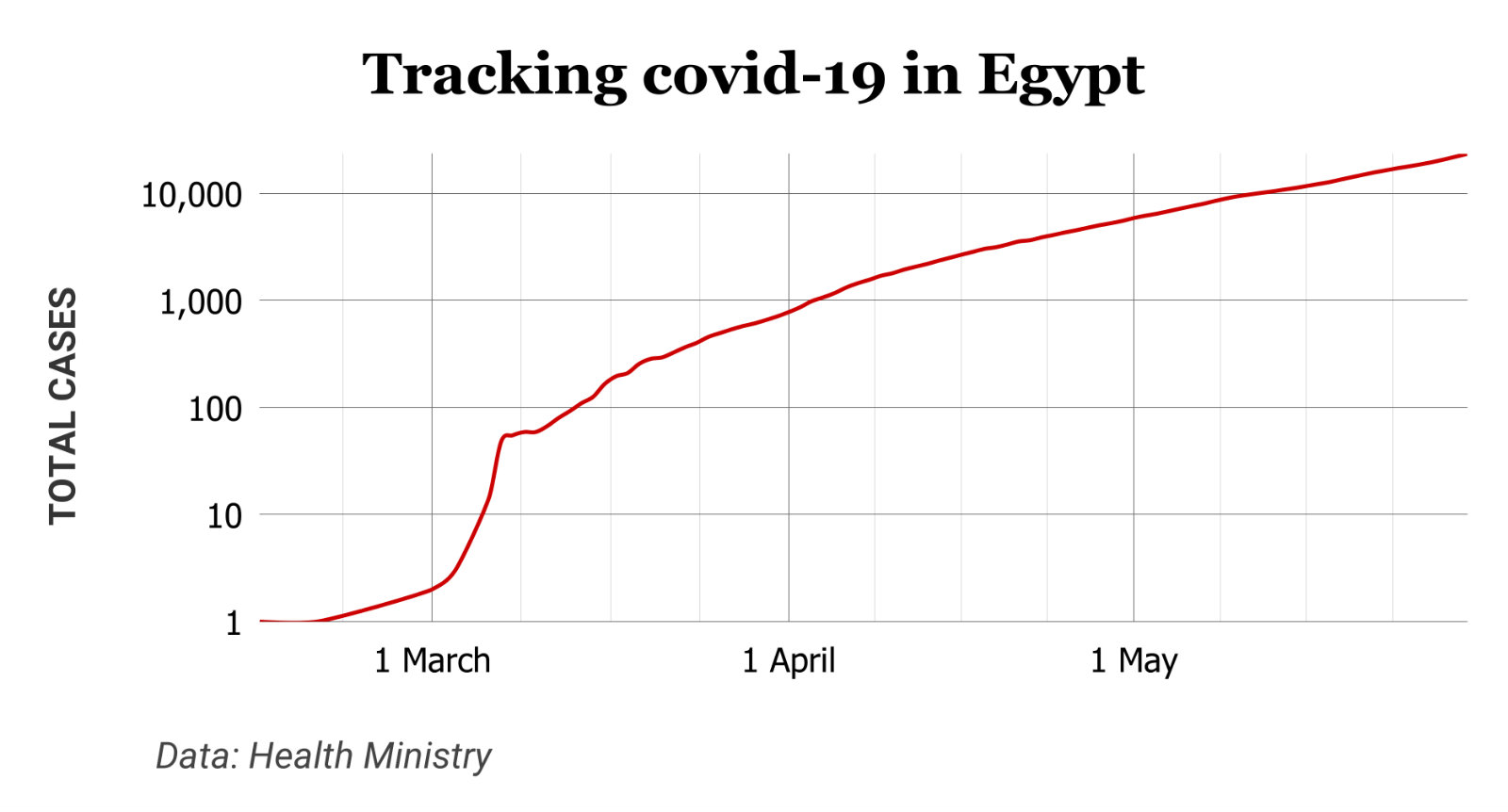 Egypt has now disclosed a total of 23,449 confirmed cases of covid-19 after the Health Ministry reported a record high 1,367 new infections yesterday. The ministry also said that another 34 people had died from the virus, taking the death toll to 913. We now have a total of 6,456 confirmed cases that have since tested negative for the virus after being hospitalized or isolated, of whom 5,693 have fully recovered.

The daily count of confirmed cases has been rising every day since Wednesday, when it hit 789 new cases. Egypt’s death toll also reached a high of 34 on Friday and remained unchanged yesterday. There are signs the rate of doubling of infections may be speeding up after having slowed down previously. It took 14 days for total cases to double to 23,449 yesterday, compared to 15 days for them to double to 11,719 between 1 and 16 May. Reuters, the National, Ahram Online and Xinhua have all been tracking the figures.

The Health Ministry says it is taking every step possible to protect medical personnel after a frontline doctor, Walid Yehia Abdel Halim, died last Monday after contracting the virus, according to Masrawy. The ministry has also added more employees to its covid-19 hotline to improve its responsiveness to incoming calls.

Aswan deputy governor Ghada Yehia tested positive for the virus on Wednesday and has since been placed under home quarantine, according to Youm7. Contact tracing on 51 individuals so far have turned negative results.

A helping hand for small business owners from the EBRD: The European Bank for Reconstruction and Development (EBRD) is launching an online learning and advice program for micro, small, and medium-sized enterprises (MSMEs) to help them navigate the economic pressure of the covid-19 pandemic, according to a statement. The program, which is available at no charge through the EBRD’s Know How Academy, “will also offer specific local information” on where MSMEs can access financial support from governments and banks.

The African Development Bank (AfDB) approved on Monday a USD 500k emergency assistance grant to Egypt that will provide food relief and help support vulnerable communities affected by the pandemic, according to a statement.

Covid-19 patients might no longer be infectious after 11 days of getting sick, a new study by infectious disease experts in Singapore suggests, according to Bloomberg. If proven true, the findings might alter Singapore’s patient discharge policy by expediting the release of patients that are still testing positive but have stopped being infectious.

Japan may have beat corona without using the lockdown playbook: Despite not imposing lockdowns, shutting down any businesses, or testing a high percentage of the population, Japan’s covid-19 death toll is dropping dramatically and the country is working to end their state of emergency, according to Bloomberg. Experts are unsure of the exact recipe for Japan’s secret sauce, but are looking at the government’s efforts to contact trace and whether the country had encountered a different strain of the virus.

Protests are sweeping major cities in the United States with demonstrators from coast to coast expressing outrage over police killings of black citizens and systemic discrimination against minorities after the brutal on-camera murder of an unarmed black man by a white police officer in Minneapolis. The story has pushed covid-19 down (but not off) the front pages of the global press. Protesters flocked to the White House for a second night in a row and violence continued even as mayors imposed curfews. The story is dominating global front pages: FT | New York Times | WSJ | Guardian | Reuters | CNBC | Business Insider.

The violence has prompted the resurrection of a trope familiar to anyone who lived through the events of 2011 and 2013 in Egypt. Go read Karen Attiah’s How Western media would cover Minneapolis if it happened in another country.

China is pushing ahead with a national security law for Hong Kong that domestic “democracy activists and Western countries fear could erode the city’s freedoms and jeopardise its role as a global financial hub.” Reuters has the story. The US has threatened sanctions and the end to its special relationship with Hong Kong, while Canada, the UK, and Australia have expressed concern as China’s leadership pushes ahead on issues on which they had previously faced international pushback.

Small ray of sunshine #1- There are suggestions that “small signs of life” are returning to the US economy, the Financial Times writes, pointing to figures including rising footfall in stores, declining appetite for pantry staples including pasta and flour, as well as “an increase in traffic and a fall in panic purchases at the supermarket” as being among the indicators to watch.

Small ray of sunshine #2- Elon Musk’s SpaceX has become the first private company to successfully launch astronauts into orbit after the Falcon 9 rocket took off from the Kennedy Space Center in Florida yesterday with two US astronauts headed for the international space station, the New York Times reports.

Oh, and isn’t this sort of how Planet of the Apes began? From Sky News: Monkeys ‘escape with covid-19 samples’ after attacking lab assistant.