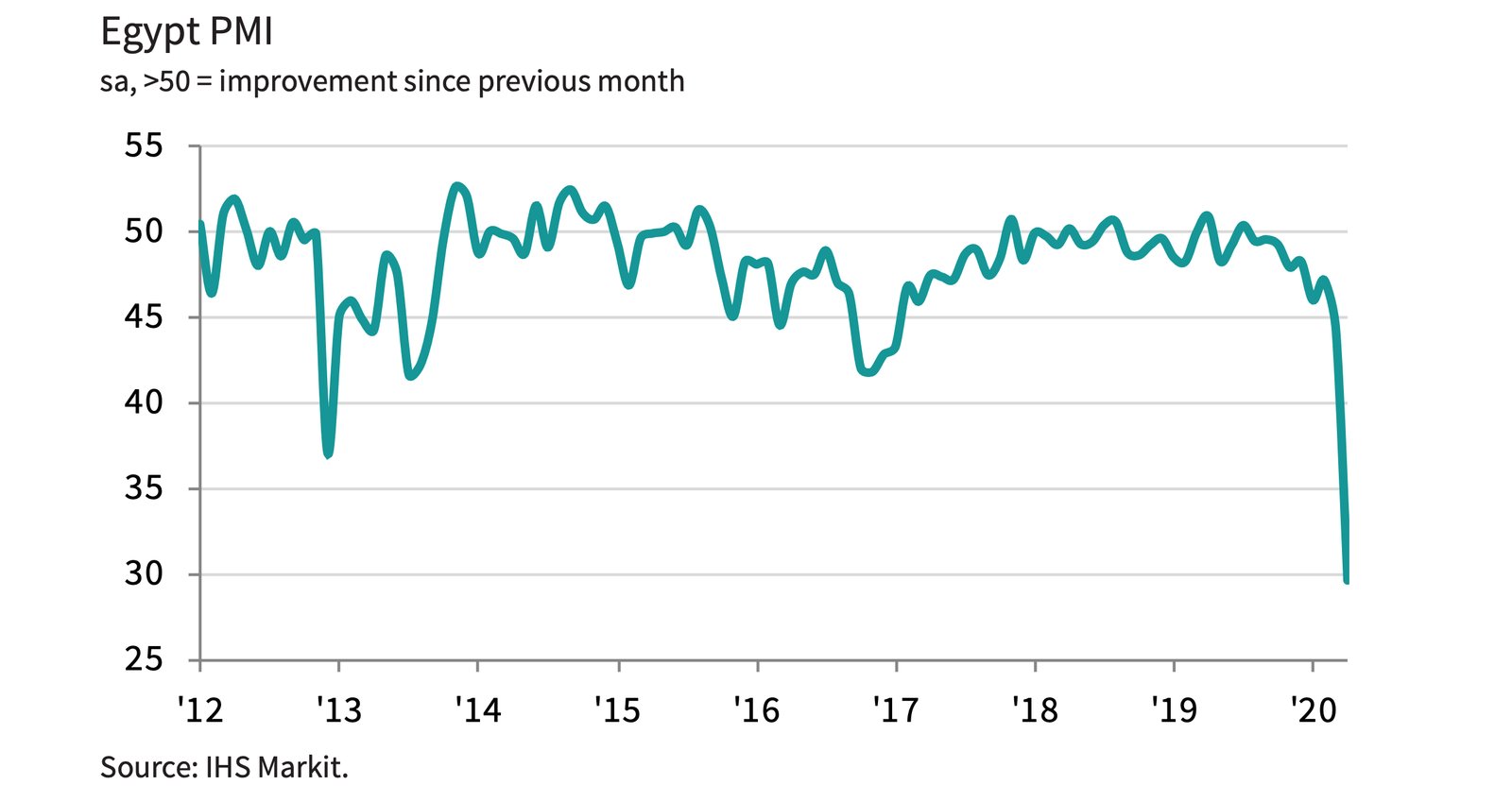 Non-oil business activity plummets to all-time low in April as lockdown measures bite: Egypt’s non-oil business activity fell at an “unprecedented rate” in April as government measures to stem the covid-19 outbreak caused a “severe decline” in business conditions, according to IHS Markit’s purchasing managers’ index (PMI) (pdf). The PMI gauge fell to a record low of 29.7 in April, down from 44.2 in March as output, new orders and exports plunged due to muted demand. PMI readings above 50.0 indicate expansionary activity, while a reading below means it is contracting.

New orders collapsed at a record rate: An evaporation of client demand caused new orders to fall at the fastest pace since the survey began in 2011. This was attributed to the Sisi administration’s anti-covid measures, which were in place through the month and included restrictions on working hours, the shuttering of the hospitality and tourism sectors, and the night-time curfew.

Businesses are cutting back: Lacklustre demand and falling output is forcing businesses to make cutbacks, including reducing input spending and labor costs. The month saw an acceleration of layoffs, causing employment to decline at the fastest rate in over three years and extending a trend that began in November. The cutbacks resulted in input costs rising at the slowest pace since the survey began.

“Businesses lucky enough to remain open scaled back activity on a massive scale, as many highlighted sharp falls in domestic sales and foreign demand. Firms forced to close unsurprisingly recorded an even steeper decline in output,” said David Owen, economist at IHS Markit.

Supplier delivery time has continued to increase, marking the second month in a row it has gone up since April and the longest wait times seen since October 2017. The slowdown has mostly been attributed to held up stocks at ports.

Raw material shortages have caused an uptick in some raw material prices, despite weak cost increases recorded by IHS but have done little to affect input costs on firms generally. Inventory levels were “drastically reduced” for many firms as uncertainty over future demand prevails.

Falling foreign sales and tourism due to airport shutdowns and global travel restrictions contributed to a “marked decrease” in purchasing activity at the start of the second quarter, spelling trouble for local vendors.

Improving sentiment may limit job losses: Despite the record blow to overall activity, sentiment improved slightly in anticipation of a reopening of the economy and heightened activity in the coming year. “Business expectations remain strong … which may suggest firms will look to retain workforces for when the economy reopens,” said Owen. “The outlook may darken through should the crisis worsen and measures are extended.”

Saudi Arabia’s economic activity also contracted, albeit at a slower rate in April. The kingdom’s PMI reading (pdf) came in at 44.4, inching up modestly from 42.4 in March. Private sector output is still suffering record declines while new orders and employment are struggling to grow.

The UAE’s reading continued to fall for the sixth consecutive month, recording a PMI of 44.1 (pdf), down from 45.2 in March. The country has been ailing from significantly reduced business activity since preventive measures against covid-19 have been instituted and optimism over future recovery has reached its most grim in months.