Good morning, ladies and gents, and welcome back from what we hope was a relaxing long weekend. Now, let’s get re-oriented for the start of this truncated workweek:

It’s four days until Ramadan, which starts on Friday, 24 April — Dar Al Ifta, as we reported last week, will not be holding its traditional moon sighting to determine the start of the holy month, and has instead announced the date based on calculations.

We should hear tomorrow on whether the curfew will be extended or shortened during Ramadan. More on that front in Last Night’s Talk Shows, below.

The Sisi administration will decide by Thursday whether to extend or modify measures put in place to slow and prevent the transmission of the virus that causes covid-19.

It’s budget day in the House, with Finance Minister Mohamed Maait and Planning Minister Hala El Said set to present the draft FY2020-2021 state budget to lawmakers today for review and approval, the local press reported. You can get a refresher on the key figures here and here.

Trading resumes on the EGX this morning after the long weekend. The benchmark EGX30 index fell 1.8% on Thursday in heavy trading that saw EGP 860 mn worth of shares changing hands on the exchange, about 36% above the trailing 90-day average.

We have something of a heat wave coming in today, with the mercury heading for 33°C and staying in the 31-34°C range through the weekend. Look for the possibility of blowing sand on Friday.

It was largely quiet on the news front over the long weekend — until yesterday evening. That’s when this happened: 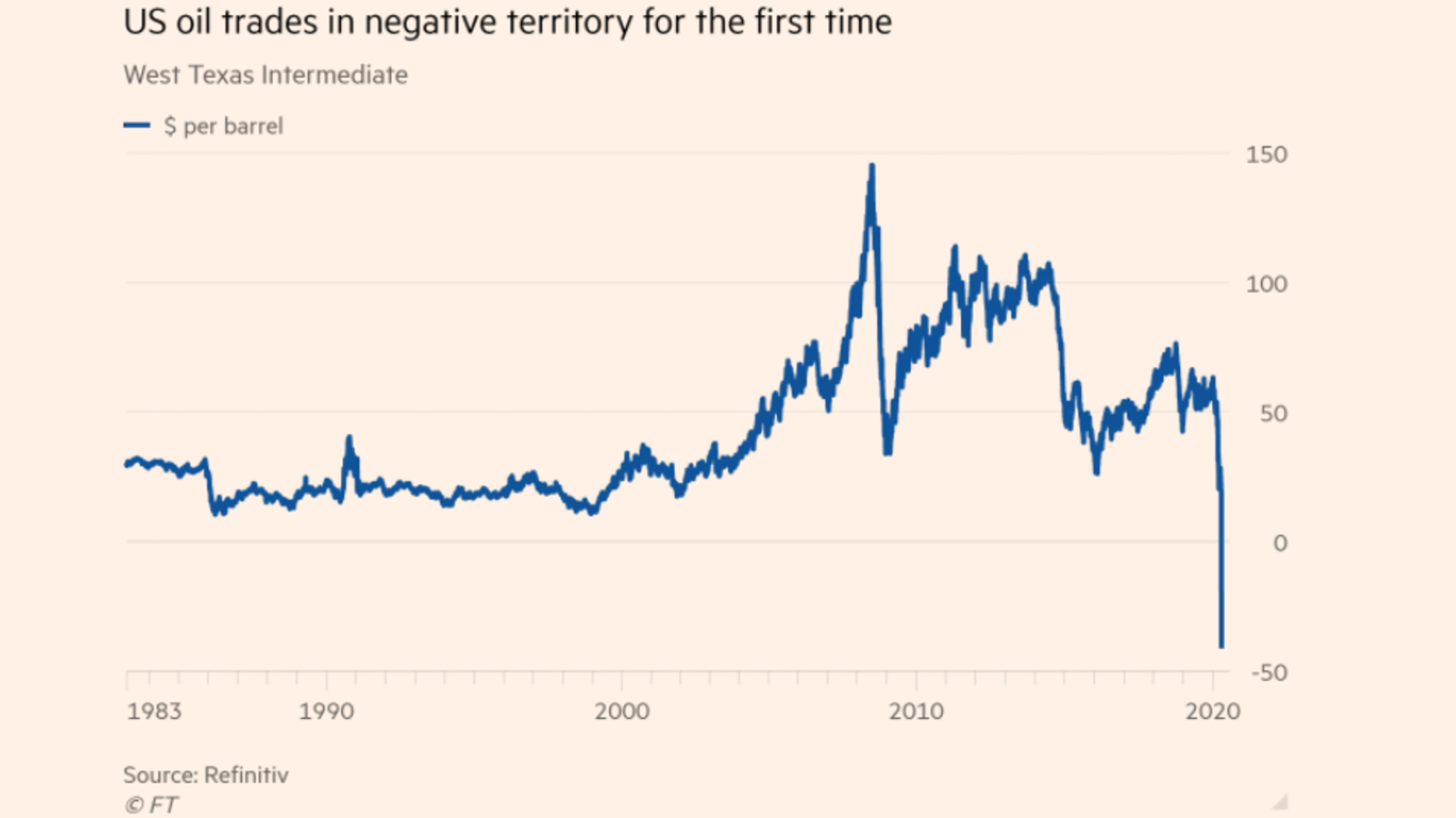 STORY OF THE DAY: US oil is now trading at below zero — meaning traders will have to pay sellers to offload their barrels — in what the Wall Street Journal says is “a chaotic demonstration of the dwindling capacity to store all the crude that the world’s stalled economy could otherwise be using.” WTI May futures are now at USD -37.63 / bbl, plunging 306% from USD 18.27 on Friday. Brent crude also dipped, albeit far less aggressively, to USD 25.57 / bbl (-9%). It’s the first time in history that oil has been in negative territory, Reuters notes.

So … wait. Producers are actually paying buyers to take their oil? In a word, yes. At least in parts of the United States. Demand has fallen thanks to covid, but producers need not keep pumping oil out of the ground lest they have to close their field — that’s expensive to do. The only thing that’s more expensive: Paying to restart production. In the race to stay in operations longest, producers are now competing for storage space. Bloomberg has a good rundown here and the NYT has an excellent piece worth reading.

How long is this gonna last? The negative prices are for deliveries next month, but futures due in June are at USD 20.43 / bbl, bringing the spread between two consecutive months to an unprecedented USD 60.76, according to Reuters.

And if you’re looking at a November contract, the price is around 25x that of May contracts, indicating that the market is pricing in an end to the covid-19 pandemic and a rebound in oil demand later this year, the WSJ says. The Financial Times and New York Times also have the story.

COULD IT GET ANY MESSIER OUT THERE?

The Donald to ban immigration: US President Donald Trump has said in a Tweet that he will impose via executive order a temporary ban on immigration to the US, capping a weekend in which he called for protesters to “liberate” states from lockdowns. The call saw protest break out from coast to coast, the New York Times reports.

North Korea’s leader seriously ill? A CNN report heading into dispatch time suggests that North Korean leader Kim Jong Un is in “grave danger” after surgery. Anyone else have whiplash?

Egypt now has 3,333 confirmed cases of covid-19 after the Health Ministry reported 189 new infections yesterday, the nation’s largest one-day total so far. The ministry also said that another 11 people had died from the virus, taking the death toll to 250. We now have a total of 1,086 patients that have tested negative for the virus after being confirmed positive; 821 them have fully recovered.

Egypt’s covid-19 infection and death rates are still within the bounds of government projections, Presidential Health Affairs Advisor Mohamed Awad Tag Eldin said over the weekend (watch, runtime: 7:39). He noted that the vast majority of cases are mild and only 8% — most of whom have underlying conditions — experience severe symptoms (watch, runtime: 54:58).

Notary offices at GAFI (and only GAFI) are up and running again as of Thursday, Youm7 reported last week. Prime Minister Moustafa Madbouly agreed to exempt GAFI’s notary services from the suspension of all citizen-facing government services (other than health and security).

EgyptAir and Air Cairo are operating more repatriation flights for Egyptians abroad over the next several days, according to Al Arabiya, which has the full schedule for both airlines’ flights.

More than 200 Egyptians came home from Canada on a flight from Toronto on Friday, the Foreign Ministry said in a statement.

A shipment of personal protective equipment from China should be arriving today, China’s ambassador to Cairo Liao Liqiang said at a presser, according to the local press. Beijing is coordinating with Cairo to send another batch of medical supplies, including covid-19 test kits.

So, Mommy, what did you do during the Great Lockdown? The people at the Ministry of Communications and IT (MCIT) and the folks at the nation’s network operators and ISPs are the unsung heroes of this covid story, if you ask us. According to figures released by the National Telecommunications Regulatory Authority over the weekend comparing use in the second week of April the to second week of March this year:

Oh, and get this: Prime time for the internet in Egypt now runs 12 noon to 3am — that’s 15 hours compared to the normal seven. You can read all about it here.

Egypt is looking to nearly double its commodity storage capacity in preparation for a tighter global market after reports last week that some traditional suppliers were imposing export controls amid covid-induced uncertainty. The EGP 21 bn program will expand the country’s strategic commodity reserve stores to 8-9 months from 4-6 months and involve building new warehouses for strategic commodities in seven governorates, Supply Minister Ali El Moselhy said on Saturday. The state is in talks with foreign builders for contracts.

The news comes as state grain buyer GASC ramps up wheat imports, buying 360k tonnes of French and Russian wheat as part of the 800k tonnes the government plans to import this season, Al Mal reports.

Romania, meanwhile, is backing away from a move that would have seen it export only to EU member states, according to Interior Minister Ion Marcel Vela, Reuters reports. Romania is a key supplier to Egypt and said last week it would impose an export ban to secure its domestic needs through the pandemic.

Stocks of rice are now sufficient to cover demand through November 2021 and will increase when the local harvest begins in September 2020, head of the Federation of Egyptian Industries’ rice division Ragab Shehata said, according to Al Masry Al Youm.

Second term written and oral university exams have been canceled and will be replaced with either research papers or online exams, according to the Supreme Council of Universities.

Al Ahly FC is holding talks with its players over possible wage cuts and may come to a decision during a board meeting this week, Director Khaled Mortagy told BBC Sport Africa. Football clubs have been hit financially since the season was put on hold in mid-March, with Arab Contractors and Pyramids FC already having announced wage cuts.

Among those in the private sector opening the chequebooks to support the nation’s battle against covid-19:

Spring Meetings wrap with an iffy EM debt relief plan: The G20’s calls during last week’s IMF / World Bank Spring Meetings to suspend debt repayment for emerging markets isn’t going down so well with private creditors, the Financial Times says. The idea is good on paper, but creating a “uniform” arrangement leaves too much room for the move to be feasible, the investors say.

Each country needs its own tailored program, rather than pushing for a “top-down” solution, Allianz economic advisor Mohamed El Erian argues. He also advocates for the programs to be voluntary “so you get good buy-in and also people continue to have aligned incentives.”

With veto power in hand, the US stopped an SDR issuance: The Trump administration, which effectively has veto power at the IMF, shot down a proposal for a new issuance of Special Drawing Rights (SDRs) — the IMF’s artificial currency made of unequal parts USD, EUR, RMB, JPY, and GBP. US Treasury Secretary Steven Mnuchin suggested that an expanded SDR issuance would not be helpful for the countries that actually need it, since they are allocated based on shareholding proportions, meaning G20 countries would actually get the majority of the SDRs, according to Foreign Policy.

The World Bank’s “pandemic bonds” are finally paying out USD 132.5 mn to poor nations hard hit by the covid-19 outbreak, with a designated committee set to meet in the coming days to determine eligibility and distribution, the Financial Times reports. The bonds, which were issued three years ago, met all the criteria needed to trigger payment on Friday.

Earnings season ramps up in the US this week: We’ll get the first figures from the hard-hit airline industry when Delta Airlines and American Airlines report their first-quarter results while tech giants Intel, Netflix and Xerox will all post their figures mid-week. Check out the full earnings calendar here.

The tone was set by US investment banks last week which all saw profits fall during the opening quarter of the year (see: here and here).

If you think 1Q is bad, wait for 2Q when we have the full effect of the April shutdown weighin on figures.

And we may not have seen the worst in the equity markets, according to Citi: Markets are not factoring in a potential second wave of covid-19 or accounting for the current one to take up to 18 months to fully cycle across the world before a vaccine is available, Citi Private Bank warned on CNBC yesterday. The bank’s chief investment officer forecasts earnings to fall 40% in the second quarter and that they will not return to their 1Q2020 levels for another nine quarters.