The 7pm-6am curfew to slow the spread of covid-19 technically expires today. We say “technically” because it was imposed on 25 March for a two-week period. We expect an announcement later today that it is being extended, but have no inkling of how long it will remain in place or whether conditions will be tightened.

And to keep us all on the same page: We’re still a week or more away from decisions on extensions of school closures (expires 13 April) or of the ban on flights (15 April) or the closure of restaurants, gyms and museums (also 15 April).

Two pieces of good news to get us underway this morning:

We never thought we’d say this, but Egyptian internet service providers are making us smile. Head down and read today’s Hardhat for more on why we think ISPs — not a category of businesses that engender warm feelings, not here and not anywhere in the world — are the unsung heroes of covid-19 in Egypt. Amid all the WFH / e-learning / Netflix and YouTube binges, the nation’s internet has been pleasantly solid (by Egyptian standards). We dive deeper in this morning’s Hardhat.

You know what’s also making us smile this morning? The prospect of Tim Hortons coming to town. We risk the umbrage of other folks with ties to Canada when we say we’d prefer Shake Shack, to be honest. But Timmy’s? We’ll take it. The non-covid good news comes from the good people at Reuters, who note that UAE private equity firm Gateway Partners bought a 40% stake in the Gulf franchise of the company for USD 50 mn. The wire service confirmed the news with Nilesh Ved, the chairman of the franchise’s owner, who announced plans to enter the Egyptian and Indian markets. Tim’s currently has 141 stores across the Gulf region. We’ve moved beyond double-doubles, but those Boston creams…

(Yes, you will need cranes to remove us from the sides of our flats when this very long period of WFH is finally ended.)

The EGX30 surged 4.2% yesterday, dragged upward by index heavyweight CIB, which rose 5.2%. The bourse saw heavy trading yesterday with shares worth EGP 1.2 bn changing hands, about 96% above the trailing 90-day average. The EGX30 is now down 29.5% since the start of the year

The Dow and S&P lost steam yesterday, with each closing lower after posting stong gains earlier in the day coming off Monday’s surge. The WSJ’s best guess on why? Investors are slowly getting their heads around the fact that the recovery from covid will not exactly be short.

The markets today: Asian shares are mixed, with the Nikkei weakly up and shares in China, Hong Kong and Korea down less than 1% as we headed toward deadline. Futures point to a mixed open in the United States and for European equities. Brent crude is up 2.4% this morning ahead of tomorrow’s pivotal Opec+ meeting. 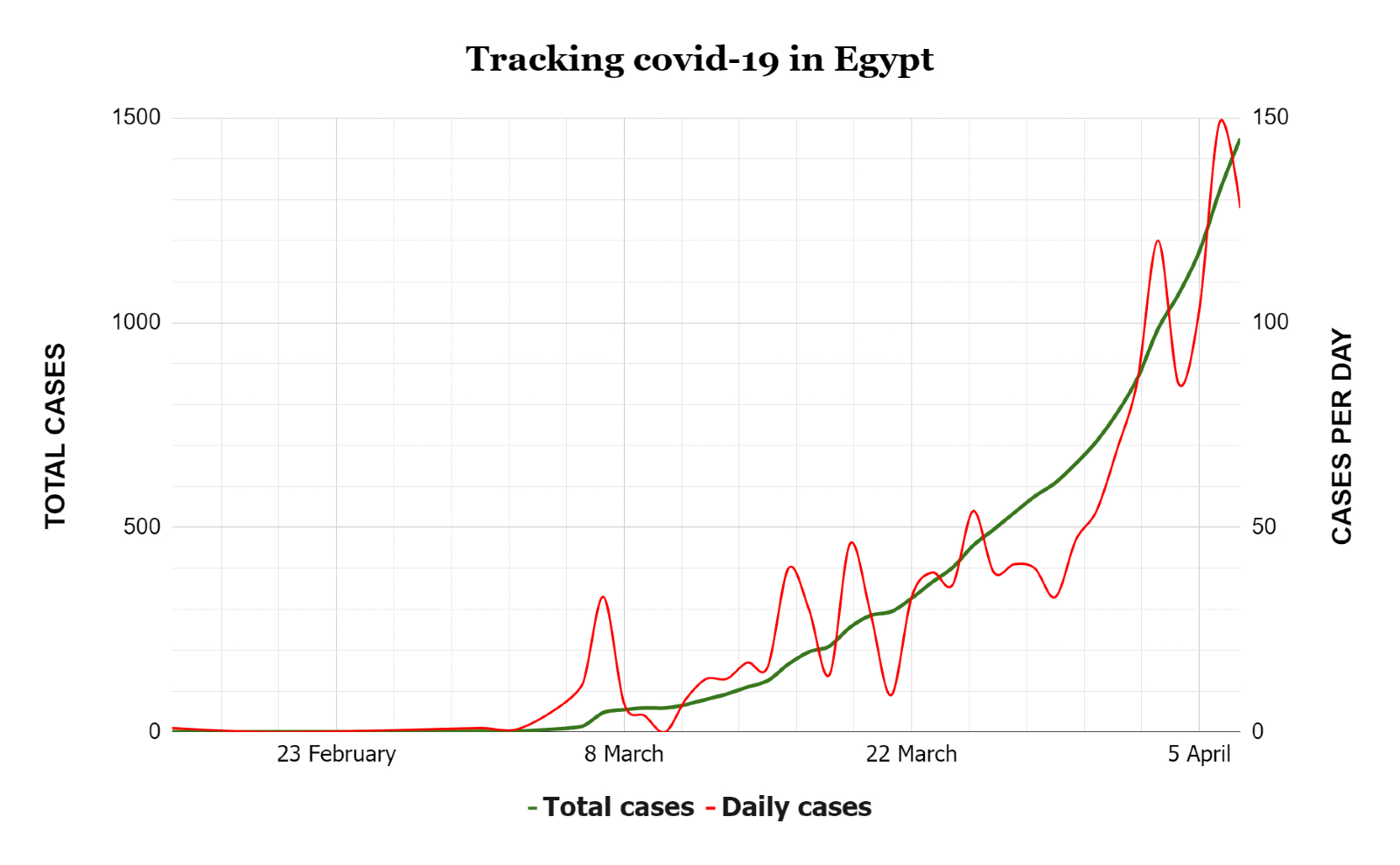 Egypt now has 1,450 confirmed cases of covid-19 after the Health Ministry reported 128 new infections yesterday. The ministry also said nine more people had died from the virus, bringing the death toll to 94. We now have a total of 427 cases that have tested negative for the virus after being hospitalized or isolated, of whom 276 have fully recovered.

Mild cases to be quarantined in dorms to relieve pressure on hospitals: Health Minister Hala Zayed said that confirmed cases with mild clinical symptoms who are under the age of 50 will be quarantined in university dorms under the supervision of the ministry and after spending five days at hospitals.

El Sisi is against a full lockdown, calls on private sector to not cut jobs: Egypt is faring well in its battle against covid-19, President Abdel Fattah El Sisi said yesterday in televised remarks (watch, runtime: 50:05), describing the situation as “reassuring and under control” and saying he is not in favor of “suspending work,” alluding the fears of some in the business community that a full lockdown could be economically ruinous.

Highlights of the speech:

El Sisi made no mention of the government’s plans to extend or expand the two-week curfew, which expires today.

The government has banned all gatherings, mass iftars and other collective social activities this Ramadan, according to a cabinet statement. The ban also applies to Itikaf in the last 10 days of the holy month.

Outsourcing companies and call centers have seen a 70% drop in demand among real estate, food and auto companies since the beginning of the outbreak, reports the local press. Some of the lost business has been recouped by heightened demand from healthcare providers and medical services but numbers are still hard to come by.

Eva Pharma will partner with local players to manufacture ventilators in Egypt that would be less expensive than imported models, CEO Riad Armanious told the local press. The company expects to test a prototype within days.

Lab and diagnostics company Speed Medical is buying 4 mn lab tests and disease and virus test kits through its newly established arm, Prime Speed, according to a regulatory filing (pdf). Prime Speed was established at the end of March with a capital of USD 4 mn. Speed Medical owns and operates Speed Lab and Speed Clinic.

The government has provided the healthcare sector with EGP 3.8 bn in additional funding over the past month, Planning Minister Hala El Said reported in an interview (watch, runtime: 22:44) on Sada El Balad TV on Monday evening.

Egypt continues to hand out fines to covidiots: Egyptian authorities have closed down and fined 6.7k private tutoring centers, 4.9k commercial stores, and 2.5k wedding halls for violating the ban on mass gatherings or violating curfew, as well as more than 7k restaurants and cafes for offering shisha after it was banned, Assistant Local Development Minister Khaled Qasim said on Min Masr (watch runtime, 10:08). Qasim also told Ten TV that 416 nurseries, 239 sport fields, and 2k markets have been fined for continuing to operate (watch, runtime: 03:44).

Civil Aviation Minister Mohamed Manar has promised to lobby the Finance Ministry to lift a 20% levy imposed on airlines that source maintenance, aircraft leasing, or other services from service providers abroad, said Al Masria Universal Airlines President Ahmed Ismail to Al Mal. Manar will also look into exempting local airlines from paying rent for offices in Egyptian airports, accommodation for its crew members, and any other fees collected by the ministry. The industry has been lobbying the ministry for a bailout package. International industry body IATA warned earlier this week that Egypt’s airlines could lose USD 1.6 bn in revenues, endangering 205k direct and indirect jobs.

The Trade Ministry’s SMEs Development Agency is launching an exceptional loan program for small businesses struggling during the economic downturn, Minister Nevine Gamea said yesterday, according to a ministry statement. Labor-intensive and industrial businesses will be given priority to apply for one-year loans of up to EGP 1 mn and can apply at the agency’s branches nationwide or by calling 16733.

The Egyptian Competition Authority is now offering legal and economic consultations without charge to companies and advisors on the extent to which their covid-19 policies are in line with the Competition Protection Act, .

BP Egypt has donated medical supplies worth EGP 2 mn to the Abbassia, Imbaba, and Alexandria fever hospitals, according to a BP statement. The equipment will be delivered to hospitals this week and includes an ultrasound machine, a digital radiography machine, and an undisclosed number of ventilators.

MPs are giving up a portion of their bonuses to donate EGP 20 mn, according to Ahram Gate.

Covid-19 is only adding to Lebanon’s FX crisis where banks have limited withdrawals in USD, stopped dispensing foreign currencies, and forced customers to accept LBP instead of USD at an official exchange rate that is almost half of the “market rate,” according to Bloomberg.

…but the continued ability of troubled companies to raise equity and debt marks a big difference between this the “covid recession” and the last financial crisis, CNBC screamer Jim Cramer noted yesterday. “This time the companies that really need money can actually get it. This time there’s no financial crisis, at least not yet,” the Mad Money host said. “Even genuinely troubled companies can raise capital here, a good sign for the economy, at least for now.” 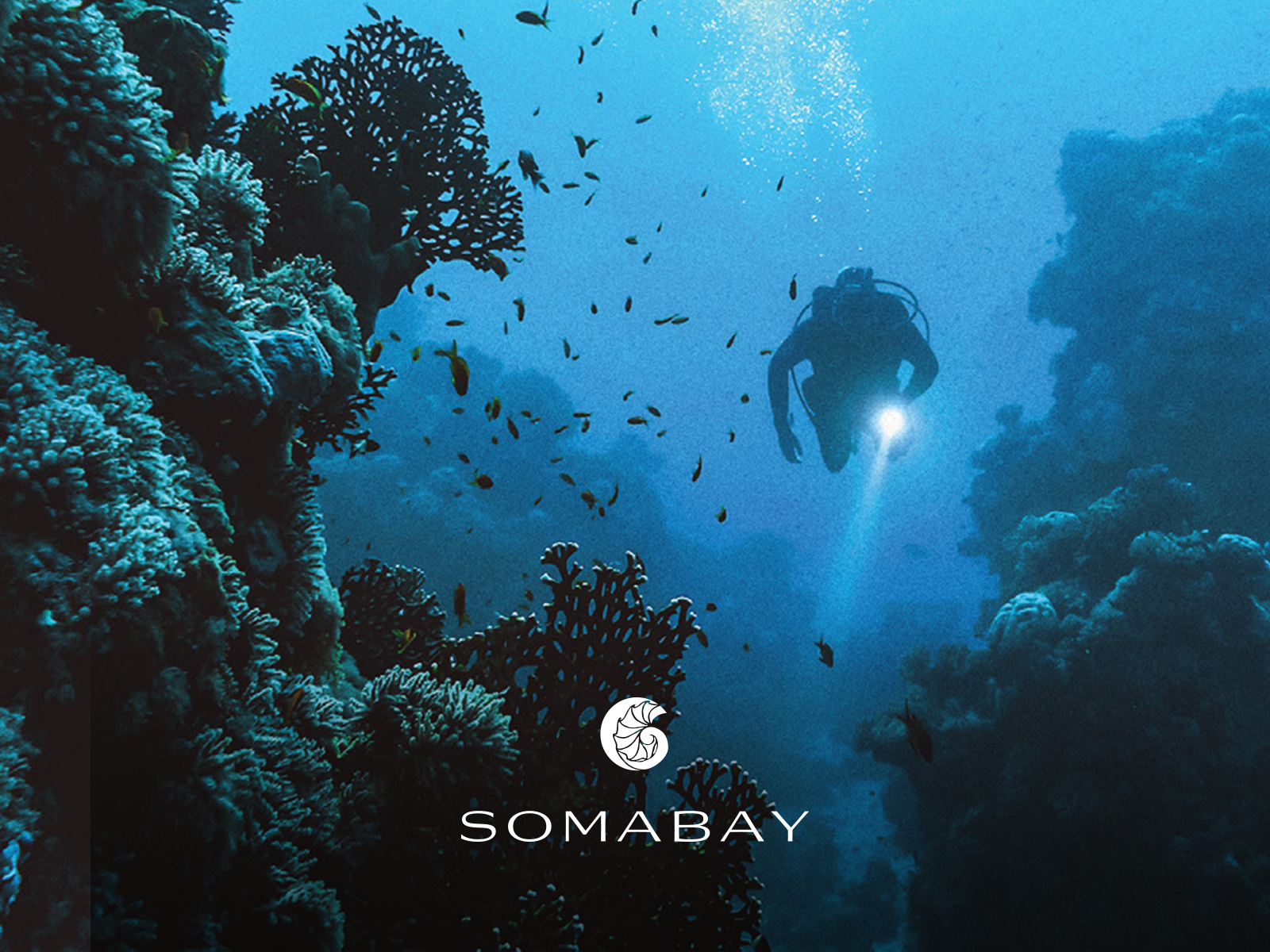 Using coronabonds to fund stimulus programs is gaining traction: The White House could soon issue covid-19 treasury bonds to raise funds to help the country fight the pandemic, White House economic adviser Larry Kudlow said, according to Reuters. The US is not alone — at least nine eurozone countries have been mulling the idea and the African Development Bank has already issued USD 3 bn-worth of three-year coronabonds.

Dubai is considering bond issuances and loans to help shore up its economy: The emirate is in early talks with banks to issue its first eurobond since 2016 and acquire multi-bn USD loans for its troubled flag carrier, according to Bloomberg who cite a source familiar with the matter.