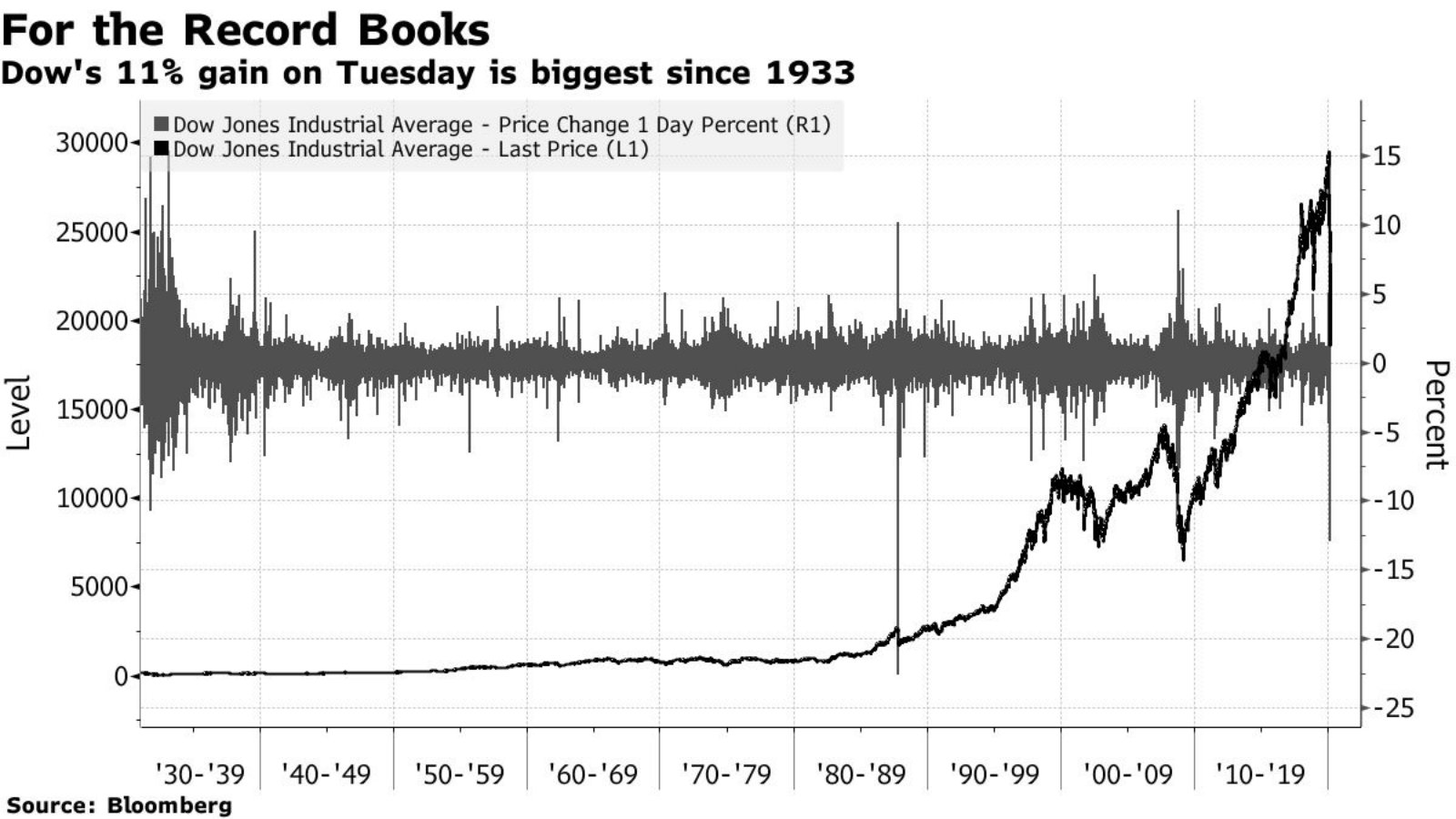 US equities saw their first two-day rally since February as investors gained confidence that senators were closed to an agreement over the largest bailout in US history. The Dow Jones has had its best two-day run since 1987, rising 2.4% during trading yesterday after a Tuesday blitz that saw it climb 11.37% — its best day since 1933. The S&P 500, meanwhile, finished 1.15% in the green after climbing 9.38% on Tuesday, its best two-day rally since November 2008. “The agreement of a USD 2 tn stimulus can help cushion the blow to the economy, but we don’t think that it’s all systems go for risk assets,” said Mark McCormick, global head of FX strategy at TD Securities. “At least the path ahead will be choppy.”

Last minute hurdles delay stimulus measures: Stocks gave up some of the gains late in the session after several GOP lawmakers raised a last minute objection to a provision of the bill that would increase unemployment benefits, claiming that it would encourage businesses to fire workers and employees to seek redundancies. In response, progressive senator Bernie Sanders threatened to block the legislation to push for more restrictions on the USD 500 bn fund allocated to bailout corporate America.

A sea of green on European indices as stimulus momentum grows: European stocks also extended their gains yesterday as EU leaders said that talks would begin today over a Marshall Plan-esque package that would provide an “exit strategy, a comprehensive recovery plan and unprecedented investment” to drag the continent out of the crisis. Nine eurozone countries are also calling for the EU to issue joint European ‘coronabonds’ to provide “stable long-term financing for the policies required to counter the damages caused by this pandemic.”

With cases and lockdowns multiplying by the day, let’s not call the bottom just yet: “I just think these markets got a bit overexcited [on Tuesday],” Craig Erlam, senior market analyst at OANDA told MarketWatch. “Obviously, a USD 2 tn stimulus plan is huge. I feel like all of these stimulus measures, monetary and fiscal could turbo-charge a recovery when it happens, but I think any sustainable recovery in markets will be hard pushed when we’re still seeing increasing lockdowns, increasing numbers of cases and deaths at a faster rate,” he said. 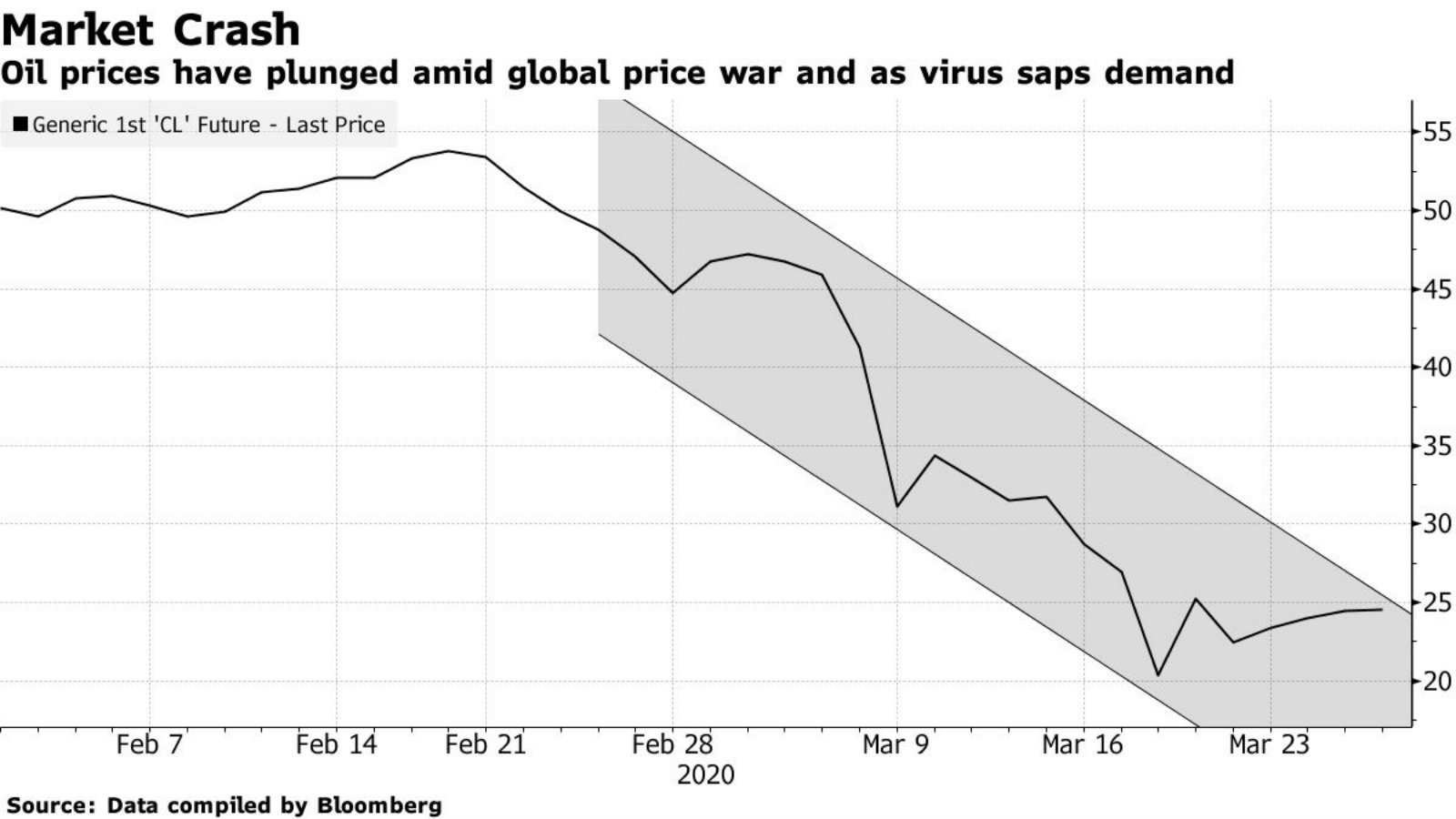 Oil prices posted slight gains despite US data showing the pandemic weighing on demand. US crude rose 2.3% to USD 24.56/bbl and Brent gained 1.5% to close at USD 27.55/bbl as data from the US Energy Information Administration showed that demand for fuel fell by 1.2 mn b/d over the past week.

US intervenes in Saudi-Russia oil price war to halt market slide: Washington is pressuring Saudi Arabia to scale back its plans to dump record amounts of oil on the record after its price war with Russia sent crude prices plunging to multi-decade lows, Bloomberg reports. Secretary of State Mike Pompeo urged Saudi Crown Prince Mohamed bin Salman to “rise to the occasion and reassure global energy and financial markets” at a time when the covid-19 pandemic is threatening much of the world with deep recession.