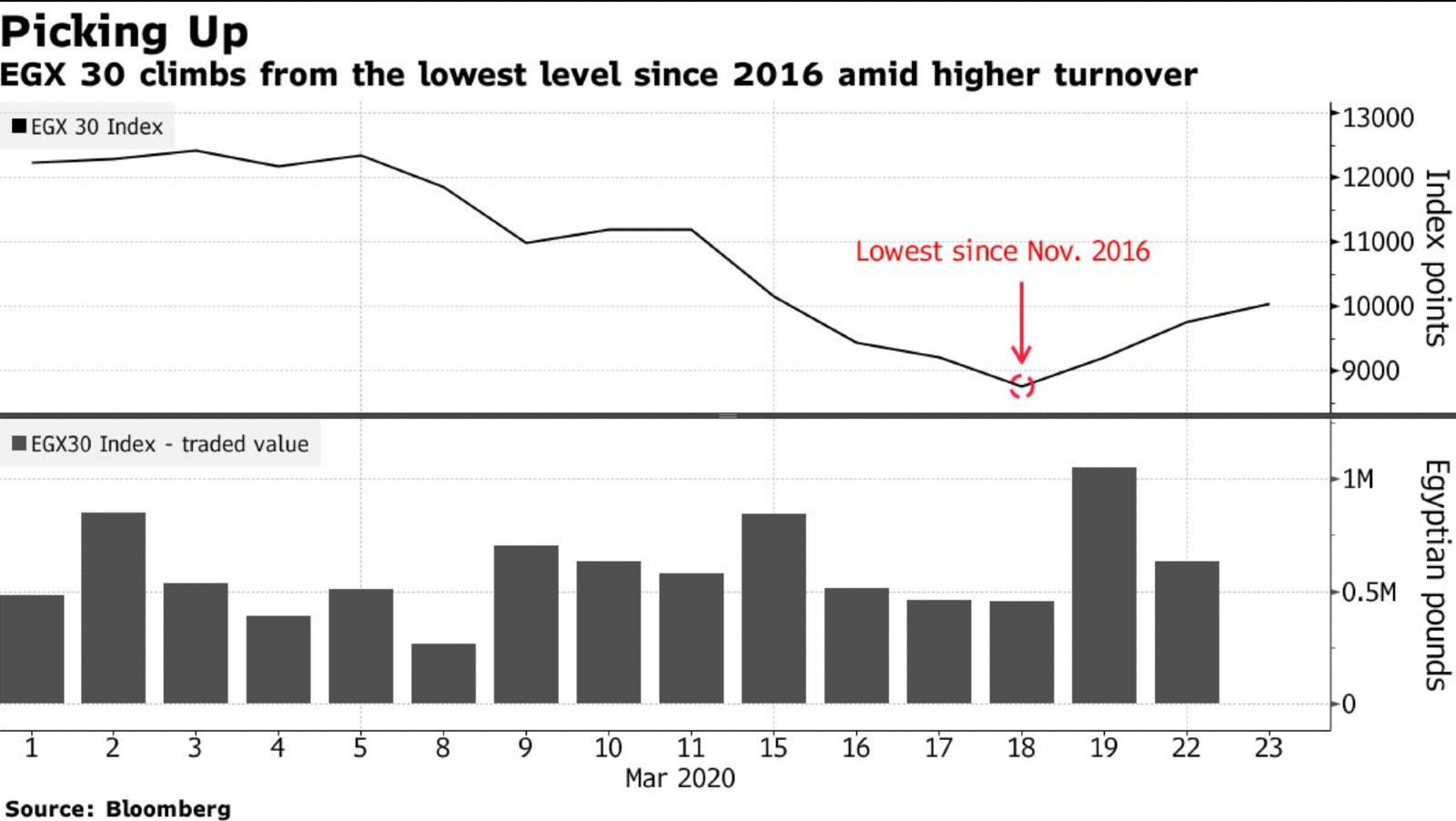 Egyptian equities join world’s top performers as EGX soars on CBE intervention: The benchmark EGX30 joined the ranks of the world’s best-performing indices yesterday, fueled by the announcement on Monday that the Central Bank of Egypt (CBE) would intervene to prop up share prices, Bloomberg reports. The EGX30 soared 6.8% during morning trading before falling back to 3.04% by the closing bell on an afternoon sell-off by foreign investors. Qalaa Holdings led the rally, rising 11.9% during the session. Elsewedy Electric and AMOC both gained 10.6%. Index heavyweight CIB ended the day up 0.4%.

This was the third-consecutive day of gains on the exchange, a winning streak that has seen the EGX climb more than 14% from Thursday’s three-year lows.

EGX circuit breakers partially suspended: The Financial Regulatory Authority has approved an EGX proposal to suspend circuit breakers for upward moves on the wider EGX100, the exchange said in a statement. Yesterday trading was suspended for 30 minutes after the EGX100 index climbed more than 5%. The FRA decision means that from now on rallies will be allowed to continue uninterrupted, with circuit breakers only kicking in if the market falls by 5%.

CBE intervention fuels rally: The latest gains come a day after President Abdel Fattah El Sisi announced that the CBE would provide EGP 20 bn in support to the stock market. A CBE official later told Enterprise that the bank would intervene directly to purchase shares, without elaborating further.

With few details released so far, we’re still uncertain of exactly how the CBE is moving into the market. The CBE’s investment will likely be long term to “give it enough time to exit the market without rushing, make a profit (despite not being a profit-seeking entity), support the economy, and still maintain its stability in the long run,” said Pioneers Holding analyst Mohamed Gaballah.

Look for the CBE to effectively try to buy the EGX30 to stabilize the market — and with only one ETF, it will have to create its own approximation.

Brokerage companies are asking the CBE for soft loans to support the bourse, as many market players seek more funding to stabilize their positions, unnamed sources told Al Mal.

Meanwhile, the share buyback spree is showing no signs of abating. Among the companies saying yesterday they are planning or have completed buybacks: Eastern Company (pdf), Electro Cable Egypt (pdf), MNHD (pdf), and Odin Investments (pdf).