So, how was your first weekend on (near) lockdown? We spent it wondering not about what’s next in the immediate sense, but about how things are likely to develop a week, a month and a year out. We have no answers, but we have some things you might want to read as you shape your own thinking:

Among the questions that matter in the coming week: First, is the medicine worse than the cure? Are there other tools we could be using to deal with covid-19 that don’t strangle economies and risk speeding our flight into a depression? And second: What’s happening in global markets as we see simultaneous collapses in stocks and bonds?

In the next month (or two): Our must-read: The doctor who helped defeat smallpox explains what’s coming. How long will social distancing and other measures have to stay in place if we remain on our present policy response? Months and months, according to research out of the University of Toronto.

And one year out: What are the best and worst case outcomes? (Written from a very US-centric point of view, but the questions and the models hold just about no matter where you are.) And from reader favourite Yuval Noah Harari: The decisions we make today will change our lives for years to come in ways we haven’t fully thought through. What does all of this mean for globalization?

PSA- Tips from Egyptian MDs in London on how we can slow community spread — and how Egyptian docs should handle covid-19: London is probably a couple of weeks ahead of Egypt in how it’s dealing with covid-19. Two Egyptian medical doctors working in London — general surgeon Sherif Hakky and intensive care physician Ahmed El Haddad — put together one of the most rational and sensible videos we’ve seen on how we here in Egypt can avoid (and, if worst comes to worst, handle) a significant outbreak of covid-19 (watch, runtime: 9:05). Key takeaways:

Egypt has now reported 294 cases of covid-19, and 10 people have died of the disease, according to a Health Ministry statement, making 75 new cases over the weekend, the added (here and here). The two deaths announced yesterday were Giza residents, including a 68-year-old woman and a 75-year-old man. A total of 41 people have fully recovered and been discharged from hospital, and 73 people have tested negative after being treated in hospital and look to be on the path to release.

The Supreme Council of University Hospitals has ordered its facilities to cut non-emergency admission by 70% to free beds for potential covid-19 patients, according to a cabinet statement. University hospital outpatient clinics are to cut their patient intakes by 50% and create specific, isolated facilities for patients presenting with respiratory problems. University hospitals were told to each prepare 30-bed quarantine areas and to ensure they have six-month supplies of key equipment, meds and disposables.

Former Health Minister Mohamed Awad Tageldin, a familiar face to many Enterprise readers, is back in government services. Ittihadiya said President Abdel Fattah El Sisi had tapped the noted expert in pulmonary diseases as his advisor on health affairs.

Some MPs are calling for a curfew and others for a ban on non-essential travel between the governorates, Masrawy reports.

Places of worship are closed to prayers for the next two weeks. The Ministry of Religious Endowments’ ban includes a suspension of collective Friday prayers in mosques, a statement said, while the call to prayer has been revised to urge worshippers to pray from their homes. The Coptic Church has similarly suspended masses and other activities in churches and community halls for two weeks, the local press reports.

Shopping malls, sporting clubs, cafes and nightclubs are to close from 7pm and 6am daily until the end of the month, according to a cabinet statement issued Thursday. Grocery stores, pharmacies, bakeries and ba’els are exempt.

The central bank has raised limits on ATM withdrawals and electronic transfers as part of a move to ease the flow of funds in the banking system while cutting down on foot traffic to bank branches. We have more in this morning’s Speed Round, below.

Any business violating the restrictions will be shut down for a month and be slapped with a EGP 20k fine, Cairo Governorate said, according to a report in the domestic press. The governorate made the announcement after TV news reports showed establishments flouting the order to close.

The Tax Authority (TA) has pushed the deadline for individual taxpayers to file returns to 9 April from 31 March, TA boss Reda Abdel Kader said. The authority also lifted fees on online submission in a bid to encourage both companies and regular people to submit their returns electronically. The government began online tax filings at the start of the year as part of Egypt’s new unified digital tax payment system. Next up: We think the deadline for businesses needs to be pushed back, too.

End-of-term exams have been cancelled at universities and final exams could be postponed to after 30 May if the current shutdown lasts, the Ministry of Higher Education said. Final exams for primary and prep school students in the state education system have been cancelled, Education Minister Tarek Shawky said on Thursday evening.

Other measures now in place: 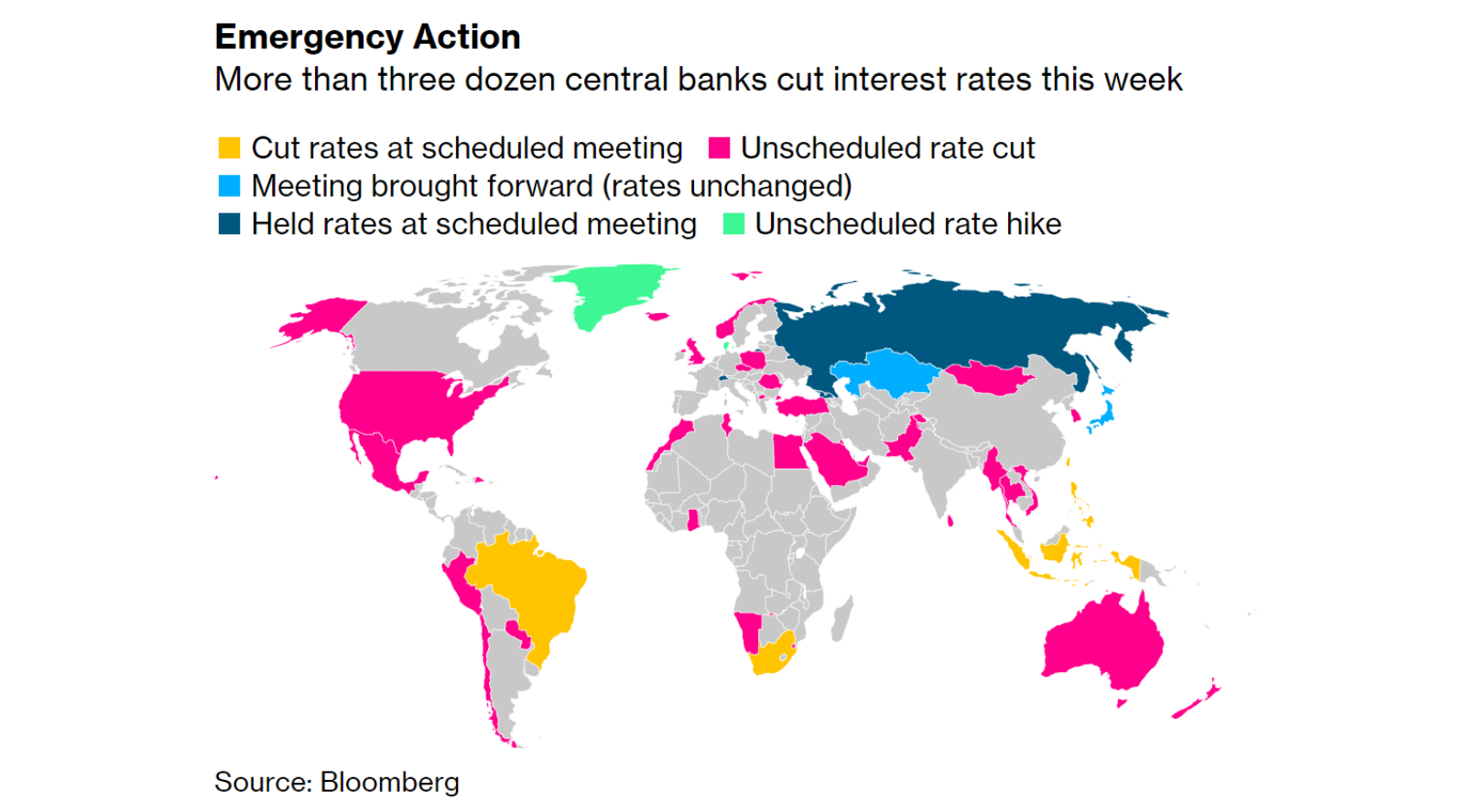 Thirty-nine interest rate cuts. In a single week. There are no words…

And there aren’t any for this either: The Trump administration is putting together a stimulus package that will total more than USD 2 tn, White House Economic Advisor Larry Kudlow said yesterday. To put that figure in context, the package would equal around 10% of US annual economic output and is double what the administration was talking about less than a week ago.

Jordan, Tunisia on lockdown: Jordan and Tunisia have both ordered their citizens to refrain from leaving their homes except for in cases of emergency.

New York, California, and Illinois residents have also been instructed to stay at home and cease all nonessential travel, according to the WSJ.

The UK has taken the unprecedented decision to step in and pay people’s wages in a bid to prevent the outbreak from causing mass unemployment. The government will pay up to GBP 2.5k per month to cover salaries of people who are at risk of losing their jobs. The BBC has more.

Italy is “shutting almost all industrial output” for 15 days as the outbreak continued to accelerate over the weekend despite the government-imposed lockdown, Bloomberg reports. The country announced 793 people new deaths and 6.6k new cases yesterday — the largest daily increase yet.

The US Federal Reserve has ramped up its purchases of mortgage bonds after the national average loan rate for mortgages spiked and the bonds came “under acute selling pressure.” The Fed’s New York branch buying USD 71 bn in the bonds between Monday and Friday, the Financial Times reports. The Fed had said last week it would restart its crisis-era bond-buying program with USD 700 bn in fresh asset purchases, and is looking now to expand the program to include short-term municipal bonds.

German fiscal conservatism finally caves: The German devotion to the balanced budget relented yesterday as the country’s finance minister announced that it would take on more than EUR 150 bn in new debt, the Financial Times reports.

SOMETHING TO MAKE YOUR SMILE: Rockhopper penguins go on a date at the aquarium. A pair of bonded rockhopper penguins (meaning they’re “together” for the nesting season) were allowed to roam around the Shedd Aquarium in Chicago, which has been closed to the public until next month (watch, runtime: 0:30).