EM economies are under stress as investors dump debt, flock to rising USD 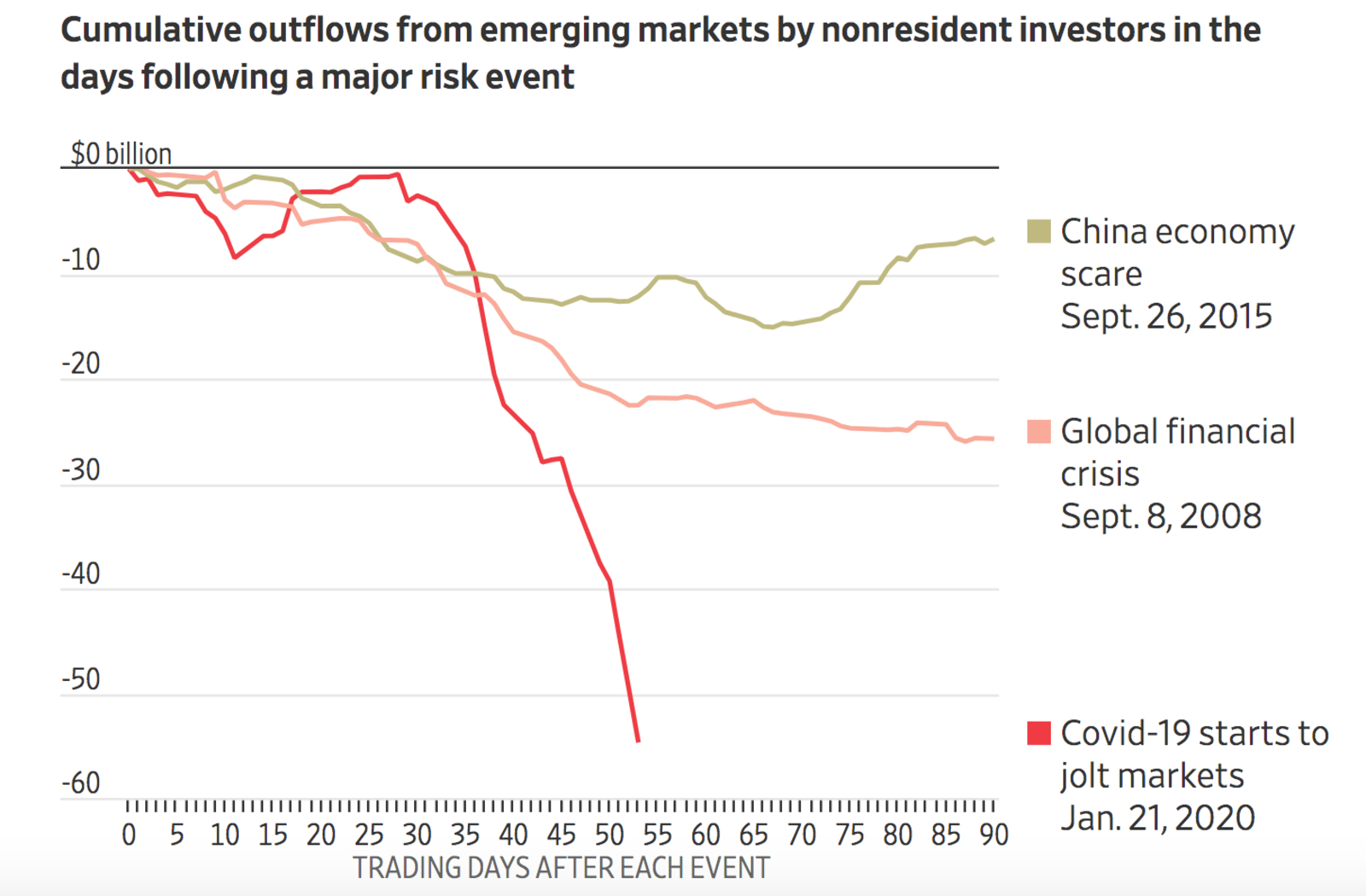 EM economies under stress as investors dump debt, flock to rising USD: Emerging market debt and equity outflows have hit USD 78 bn in the two months since the start of the covid-19 crisis in January, with investors rushing to snap up cash as a safe haven asset, Jonathan Wheatley writes for the Financial Times. The outflows recorded over the past two months are more than triple the amount seen in the three months following the beginning of the global financial crisis in September 2008, according to the International Institute of Finance (IIF). The sell-off “amounts to a ‘sudden stop’ in funding and will cause a sharp tightening in financial conditions, leaving households, businesses and governments starved of credit,” says IIF Chief Economist Robin Brooks.

EM currencies have also fallen against the greenback, while the yield premium on USD sovereign debt in EMs over US government bonds has spiked, Avantika Chilkoti writes for the Wall Street Journal. The yield spread has widened to more than five percentage points, from just above three percentage points four weeks ago. The difficulties in trading EM bonds is evident in a discount on the net asset value in the market, such as the JPMorgan USD emerging markets bond ETF, which was trading last week at 96% of net asset value. “Such a discount is unusual and indicates investors are selling the exchange-traded fund faster than the fund can unload its holdings,” Chilkoti writes.

But the bond market and debt burden may not be as big of a threat as the wider picture of overall economic damage from the covid-19 outbreak, says the FT’s influential Lex column. In comparison to 2013, when a rallying USD drove down EM bond prices as investors were concerned about defaults on USD-denominated debt, narrower current account deficits and stronger FX reserves mean EMs are better positioned today to handle the shock of falling bond prices. However, corporate earnings across EMs are expected to take a hit this year and JPMorgan has already said that EMs (excluding China) will slide into a recession in 1H2020.

On the bright side — the USD rally is losing steam (at least momentarily): The Bloomberg USD index slid significantly on Friday after California’s governor ordered all residents to stay at home as of Thursday evening. The slide comes after the index hit a record high on Wednesday amid bond and equity sell-offs. “The softer [USD] tone is giving some respite to many badly beaten-up currencies,” said a senior EM strategist at TD securities, but the USD is still in high demand and is likely to “get back on track.” Options pricing continues to indicate that investors are bullish on the greenback, according to the business information service.