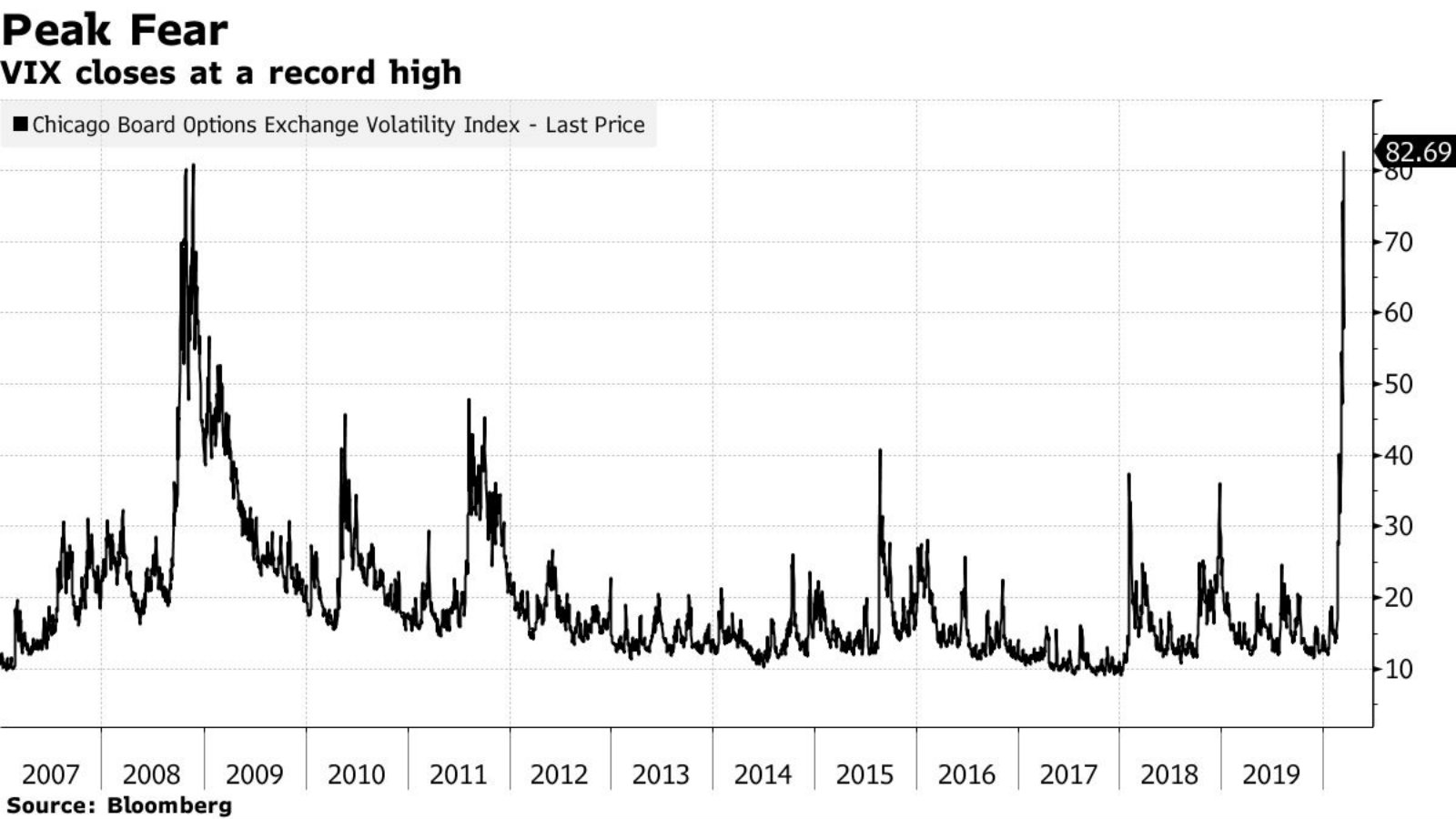 Market volatility nears record levels as US equities suffer biggest one-day loss since 1987: The volatility in the US stock market showed no signs of letting up yesterday after indices yesterday followed up Friday’s biggest one-day gain since 2008 with their largest one-day loss since 1987. The Dow Jones shed an incredible 3,000 points (or 13%) to close at a two-year low, and the S&P 500 plunged 12% to erase its 2019 gains and fall 30% from its all-time high in February.

The VIX tells you everything you need to know: The index that tracks volatility in US equities closed at a record high of 82.69 yesterday. The gauge rose as high as 83.56 during trading, just a few points short of its intraday record at the height of the financial crisis in October 2008. “In 2008, you pretty much knew it was the banking system breaking down, but didn’t know exactly how, and now it’s everything breaking down and how that spills over,” said Steve Sosnick, chief strategist at Interactive Brokers. “The latter is worse, I’d argue — this is dislocating everything.”

The market panic was started by the Fed’s surprise stimulus dump… Within hours of the Federal Reserve’s declaration of war on covid-19 on Sunday evening, US stock futures were limit down in a sign of the turbulence to come. Sure enough, the S&P 500 plummeted 8% after the opening bell, triggering circuit breakers that suspended trading for 15 minutes. Allianz economic advisor Mohamed El Erian described bemusement and sadness at the Fed’s emergency announcement, and placed the blame for the chaos at the door of the FOMC.

…and continued as investors became increasingly aware that realisation that the US economy is heading into lockdown: “This is different,” Steve Chiavarone, a portfolio manager with Federated Investors, told Bloomberg. “The thing that is scarier about it is you’ve never been in a scenario where you shut down the entire economy… You get a sense in your stomach that we don’t know how to price this and that markets could fall more.”

The Fed is still throwing bns of USD to try and stabilize the repo market: The Fed yesterday injected another USD 500 bn into the repo market after its USD 1.5 tn emergency operation last week did little to solve a growing liquidity crisis in interbank lending.

European equities aren’t doing much better: With both countries now on full-scale lockdown, Spain’s IBEX (down almost 8%) and the Italian FTSE MIB (6.1% in the red) among the biggest losers yesterday. The French CAC lost 5.75%, Germany's DAX ended 5.31% down, and London's FTSE 100 fell 4.61%.