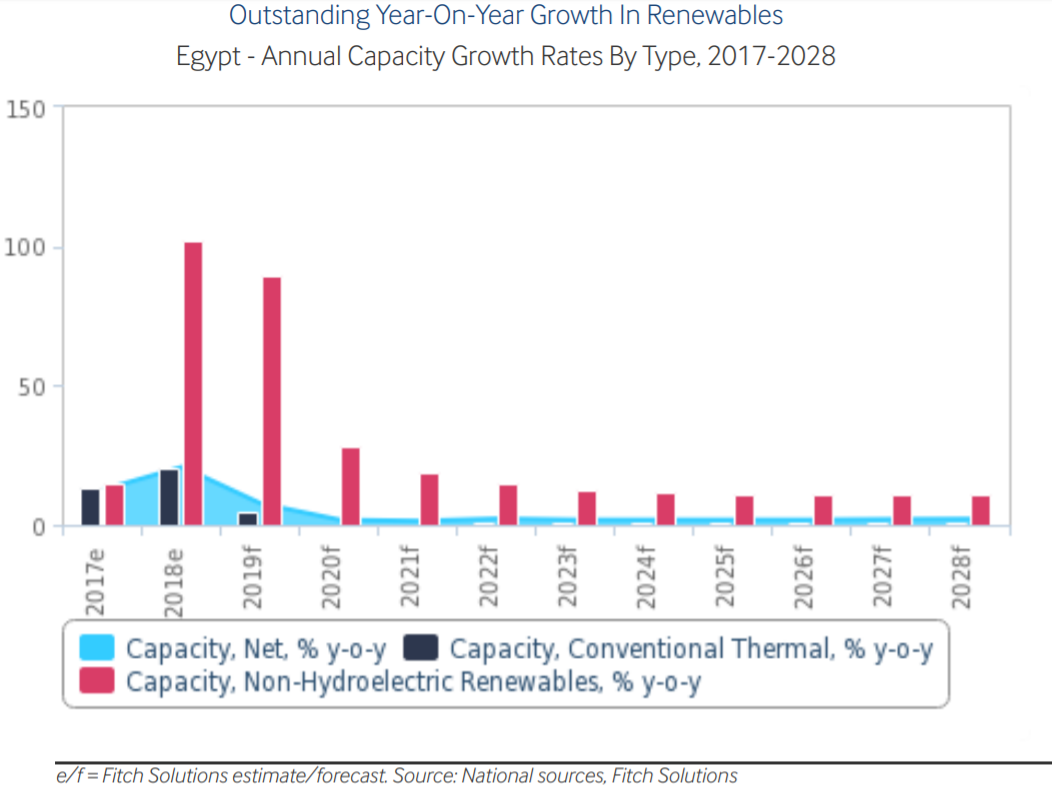 Why Egypt looks set to be a regional leader in electricity for the next nine years: We’re setting aside our covid-19 talk of last week to look beyond the current crisis in the infrastructure, where Fitch Solutions’ BMI Research Egypt Power report (paywall) on Egypt’s electricity sector is on track to generate an exportable surplus. The report sees Egypt increasing power generation to 265 terawatt hours (TWh) by 2023 from 231.5 TWh this year. This will allow it to generate a surplus even as domestic demand rises to 234.9 TWh by 2023.

Electricity sector growth driven by gas-fired power plants: Egypt will remain heavily dependent on fossil fuels through to 2028, with gas and coal-fired plants producing 85% of the country’s electricity. Most of this will be powered by the country’s large natural gas resources, with gas-fired plants — like the Siemens / Orascom Construction / Elsewedy Electric combined cycle power plants — expected to account for 75% of total power generation.

Coal among the biggest losers in the sector: The report is bearish on coal and expects it to become increasingly marginalized as the use of gas-fired plants increases. “Coal-fired power has lost favor in Egypt once again, following the discovery of robust domestic gas reserves,” the report says, pointing to the number of high profile projects that have either stalled or cancelled altogether. These include the 2.65 GW Al Nowais plant that was scrapped last October, and the 6.6 GW Hamrawein project, which looks to have been relegated to “zombie” status.

Renewables will be the fastest growing segment through to 2028: “Egypt will be one of the fastest growing non-hydropower renewables market in the region over our 10-year forecast period, with capacity expanding by more than 8.5 GW at an average rate of 22.1% y-o-y between 2019 and 2028,” the report says. This rate boils down to a number of key factors, including the availability of solar and wind potential, and the decreasing costs of harnessing solar and wind energy. “Falling equipment costs will make such facilities increasingly profitable while offering cost-competitive electricity tariffs relative to average thermal power rates,” it says. This in particular will help to bring in private sector investment, which BMI Research sees as crucial to growing the sector.

Still, the gov’t looks unlikely to meet its 2022 target of 20% renewables: Despite the rapid growth in the sector, BMI Research does not think the government will meet its target to generate 20% of its power from renewable energy by 2022, calling it “an unrealistic target, especially given the hefty investment registered in gas-fired thermal power projects.”

Ditto nuclear: “We remain downbeat on the prospect of the Dabaa nuclear power plant project reaching completion and entering commercial operations within our forecast period to 2028,” BMI says, citing the high costs and steady growth of generation from other sources. The report does note, however, that Egypt’s strategic ties with Russia might provide it with the impetus to continue with the project. You can check out our starter pack on the Dabaa nuclear power plant here.

But with the growth in capacity and a robust export market, Egypt looks set to be a regional leader in electricity: “New capacity in Egypt and the UAE will account for almost 65% of the region’s total net growth in renewables capacity, spurred on by high-volume private sector investment and increasingly competitive renewables auctions expected over our forecast period to 2028,” the report says. Egypt’s plans to export surplus to other countries in the region will also contribute to the country becoming a regional power hub, with agreements with Saudi Arabia, Sudan, Cyprus and Greece set to see it send electricity in almost all directions.