Egypt’s scores in all six qualities of a sustainable market economy have either improved or remained stable, EBRD says 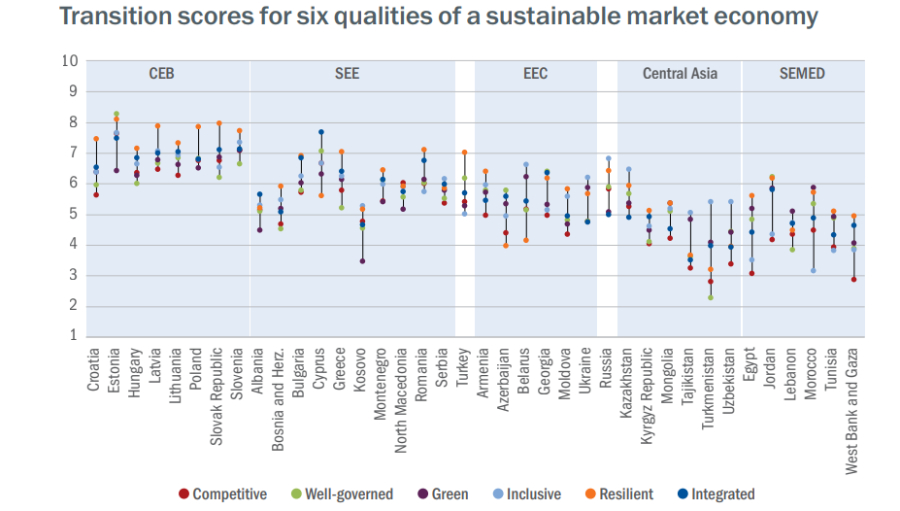 Egypt has seen improvement or stability in all six qualities of a sustainable market economy, the European Bank for Reconstruction and Development (EBRD) said in its annual Transition Report. The economy has become more competitive, better governed, greener, more resilient, and more integrated in the past year, while its inclusivity score remained unchanged from the 2018-19 report.

After being our trouble area in last year’s report, Egypt’s governance transition score jumped the most, rising to 4.83 from 4.68. However, when measuring progress since 1996, Egypt’s average governance score has declined, albeit at a slower pace than the 21 other countries that have also seen a drop in their governance scores over the period.

Our macroeconomic performance has improved: Real GDP growth reached 11-year highs in FY2018-2019, while inflation continues to decelerate and unemployment levels are falling “due to the sound implementation of economic and structural reforms.” Egypt’s fiscal position also continued to show improvement, despite a slightly widened current account deficit due to lower remittances and non-oil exports.

We also got props for “strong” progress on structural reforms, and the Tourism Ministry’s E-TRP reform program, which has boosted Egypt’s tourism competitiveness and attractiveness levels. The report notes that tourism revenues reached record highs of USD 12.5 bn in FY2018-2019.

Key priorities going forward: Improving private sector investments, keeping up structural reforms, and addressing water scarcity. The EBRD stresses that Egypt needs to continue lowering interest rates to spur private sector borrowing and investments, in addition to adequately implementing laws that support the private sector. A key priority for us in the coming year is pushing ahead with reform plans to consolidate what we’ve achieved so far, including pressing ahead with the state privatization program and reforming competition policies. The bank also says there is an “urgent need” to address water scarcity through desalination plants and rationing water consumption, among other solutions.

You can read the full report here (pdf) or check out the country profile on Egypt here (pdf).