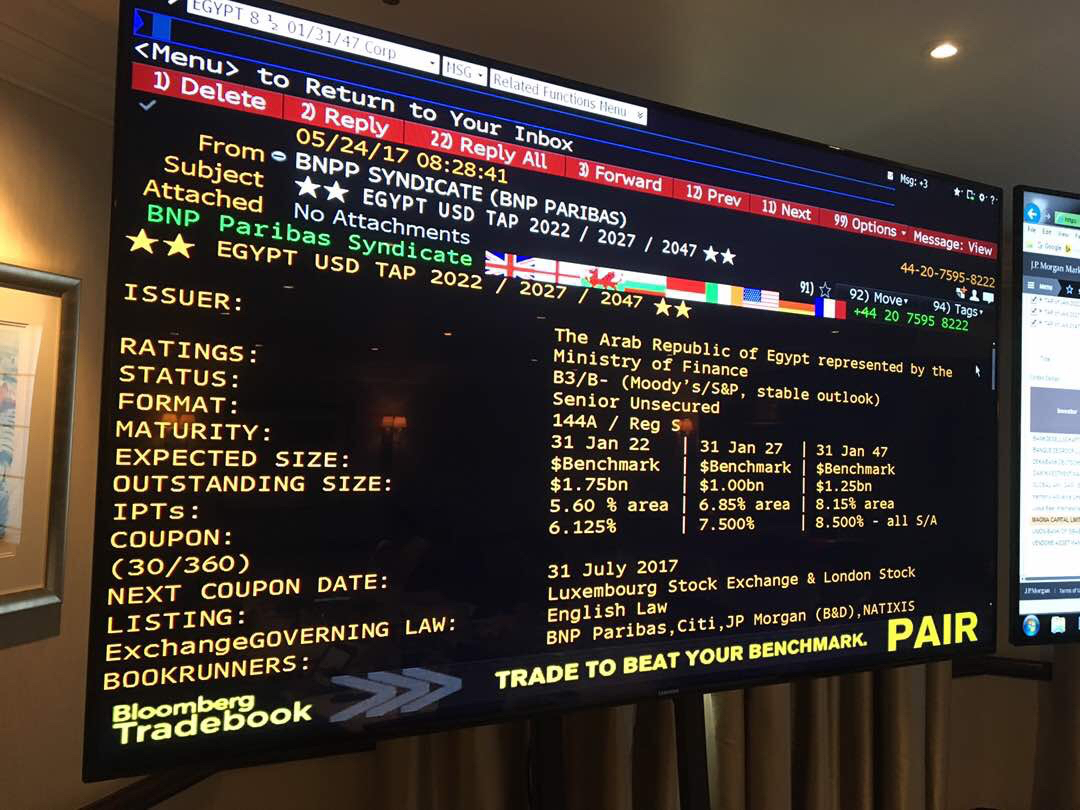 Egypt begins marketing for its triple-tranche USD eurobond issuance, says its receiving subscription requests: Egypt began yesterday marketing its upcoming eurobond issuance, Reuters reports, citing a document from one of the issuance’s advisors. The Finance Ministry, which is also inviting subscription requests, and is targeting a sale of between USD 2-3 bn on the Luxembourg and London exchanges. The subscription period was scheduled to wrap up yesterday ahead of pricing.

How much are we selling? The issuance will be divided into three tranches, with the bonds carrying tenors of four, 12, and 40 years. The initial price guidance on the four-year bonds has been set at 4.9-5%, and at 7.5% for the 12-year bonds and 8.6% for the 40-year bonds, which will be the longest USD bond the country has ever sold, according to Bloomberg.

The bonds were supposed to have been priced yesterday (per the prospectus), but as of this morning we still haven’t heard anything.

No roadshow this time around: Sources told the press last week that the ministry will not go on a roadshow ahead of the offering, noting that there are already open channels of communication with investors. Egypt’s last EUR 2 bn issuance in April was preceded by a roadshow in Asia and the Gulf. The government had also previously taken its eurobond roadshows to Europe.

Background: The Finance Ministry signalled last month that it will offer USD 2.5-3 bn in eurobonds either at the end of this year or the beginning of 2020. The ministry received cabinet approval to issue USD 5 bn-worth of eurobonds this fiscal year. The government, which earlier this year raised the limit of its eurobond program to USD 30 bn from USD 20 bn, last issued eurobonds in April when it sold EUR 1.25 bn in 12-year bonds at a 6.375% yield and EUR 750 mn in six-year bonds at a 4.75% yield.

Advisors: The government has named Citibank, JPMorgan, BNP Paribas, Natixis and Standard Chartered as joint bookrunners for the offering. Al Tamimi & Company was selected as local legal advisor, while Dechert was selected as international counsel.