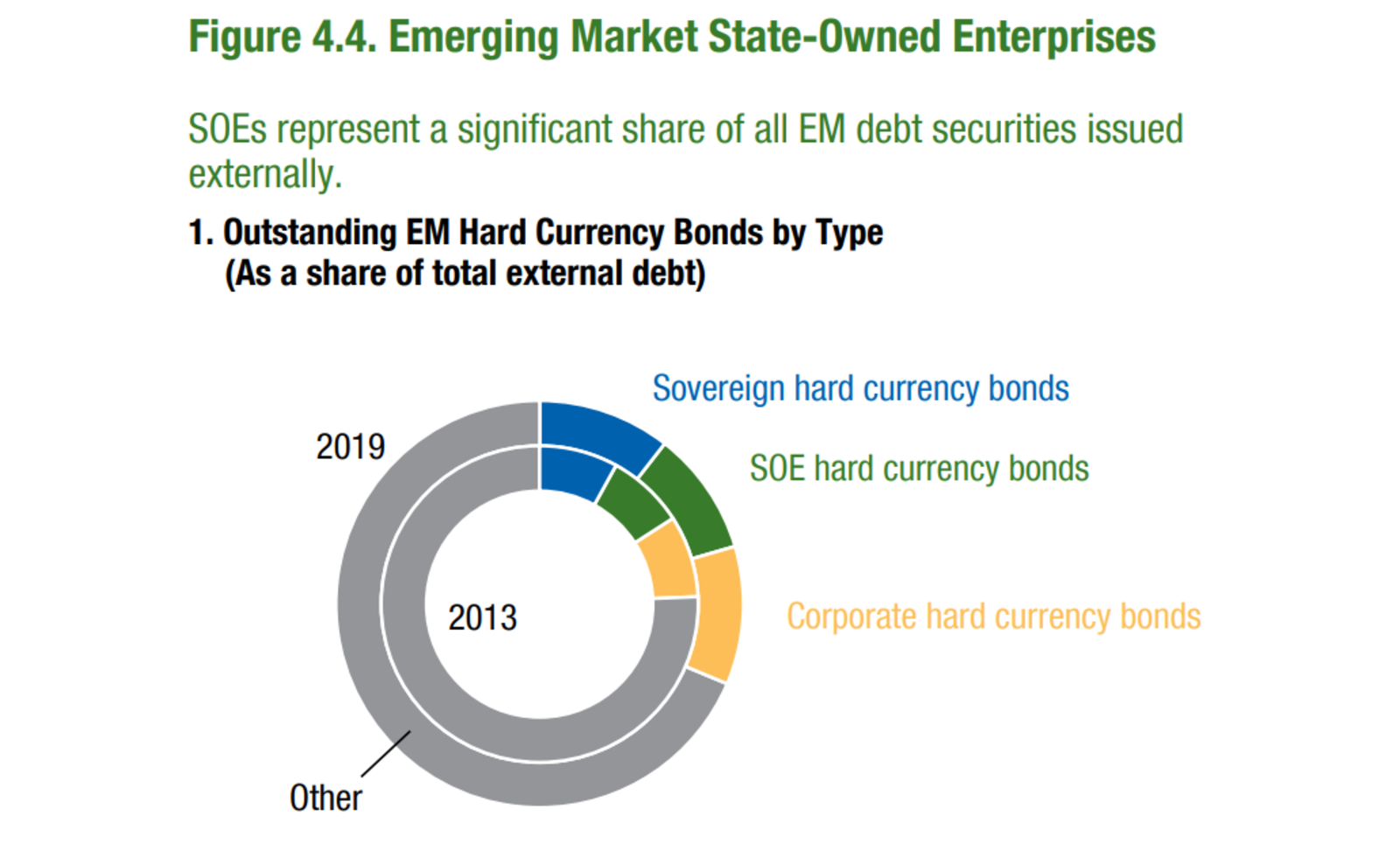 Emerging market state-owned enterprises’ rising debt burdens are a “growing concern” for government finances, as they currently account for “a significant portion” of all EM debt securities, the IMF said in its Global Financial Stability report (pdf). EM state-owned enterprises (SOEs) have capitalized on “easy global financial conditions” over the past decade to consistently and substantially increase their debt. Fitch Solutions had warned in a webinar we attended last week that a borrowing binge in EMs following the 2008 global financial crisis has created an “Achilles heel” for EMs in the form of USD-denominated debt exposure.

Just how much debt are we looking at? A lot. If we’re just looking at fully government-held SOEs, the amount of debt issued from these companies accounts for a third “of the entire EM sovereign hard currency bond universe.” Expand the scope a little to include SOEs in which governments are just majority owners, and we’re looking at debt accounting for around half of issued corporate securities.

The bigger issue is that the accrued debt hasn’t exactly helped performance: “The use of debt appears to have been less productive in many EM SOEs that have increased leverage but have become less profitable,” the report says. Oil and gas SOEs, for example, have seen their leverage ratios almost double since the global financial crisis (whereas private sector firms’ leverage has been more or less stable over the past 15 years), but have seen a noticeable drop in profits in the process. And to make matters worse, SOEs’ large debt burdens has seen their creditworthiness taken a significant hit.

Which countries are most at risk? Breathe a sigh of relief — Egypt is not among those singled out by the report as having a problem with over-indebted SOEs. In countries such as Mexico, Russia, Kazakhstan, and Malaysia, SOE debt is hovering around 10% of these nations’ GDP. The IMF cautions that this can have a spillover effect into sovereign spreads, particularly if these SOEs run into financing issues that necessitate government intervention, which could be problematic for governments’ fiscal health, especially in highly indebted countries.