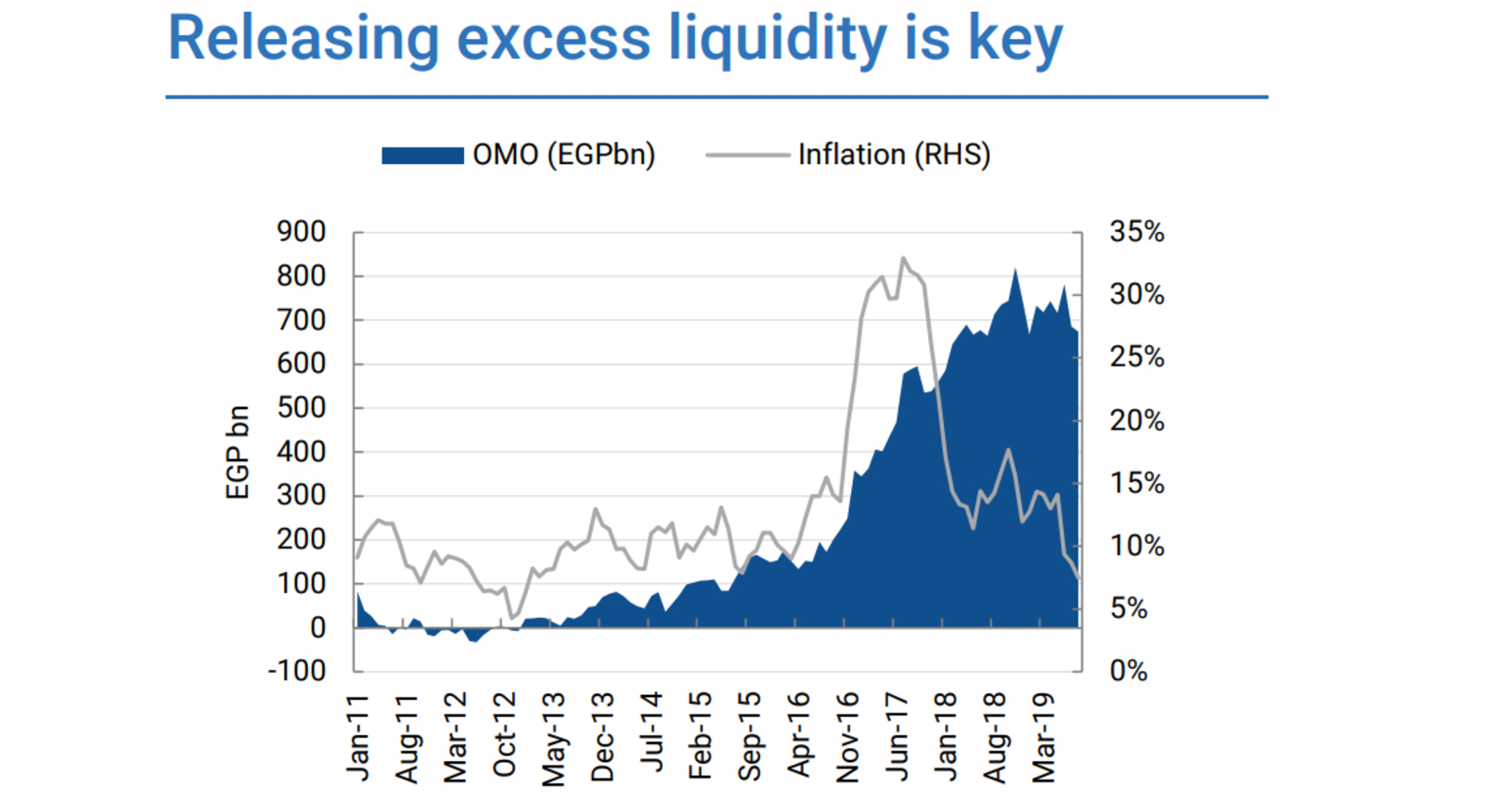 Is the CBE about to begin an “orchestrated unfolding” of liquidity to boost credit growth, private investment? CI Capital and Sigma Capital think so. The Central Bank of Egypt (CBE) could kick off a liquidity cycle over the remainder of the year and into 1Q2020 by scaling back its requirements for commercial banks’ reserve ratios, allowing banks to increase money supply in the market, Sigma Capital and CI Capital said in two separate research notes this week. The CBE had hiked its reserve requirement Ratio (RRR) for bank deposits to 14% in 4Q2017, which Sigma says pushed down Egypt’s money supply by EGP 400 bn. Now that inflationary pressures have largely been contained, Sigma says the CBE is likely to move RRR in the opposite direction to support economic growth and expects the ratio to be reduced to 10% — essentially making it possible for banks to loan out a higher percentage of the deposits they take in.

How much liquidity should we expect this policy direction to unlock? If RRR is cut down to 10% as Sigma anticipates, banks would unlock EGP 70 bn currently held in their reserves, and direct that money to increase liquidity in the sector. CI Capital, on the other hand, expects the CBE to allow for the release of EGP 220-250 bn of the EGP 650 bn currently tied in its corridor-linked deposits in 1Q2020. Over the course of the next two years, the CBE could release EGP 590 bn into the market, CI says.

The question: Will companies have appetite to invest in anything other than capex replacement when the money is more available and interest rates finally hit a reasonable level? 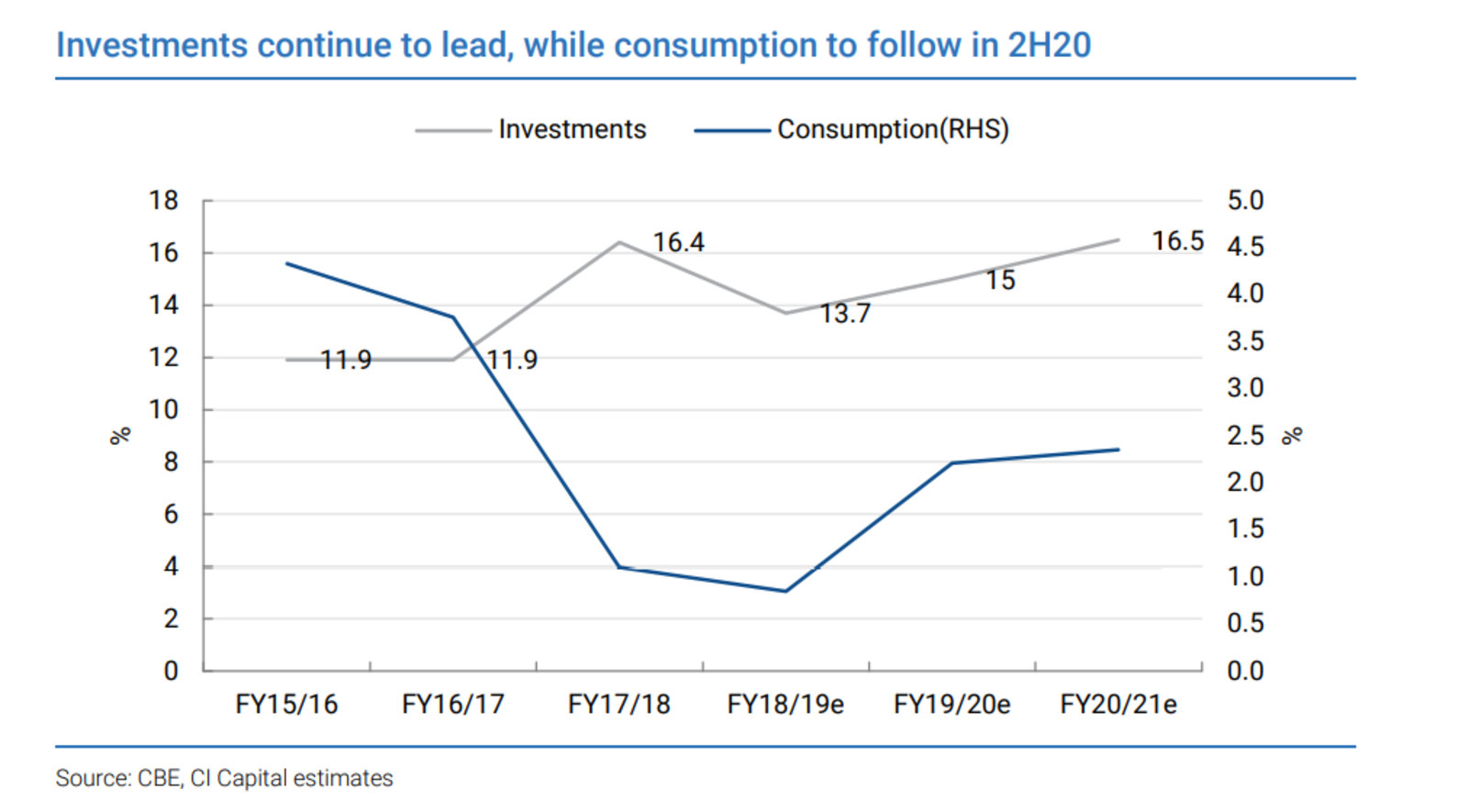 Increased liquidity will spur credit growth, investment, and economic growth: Since the CBE began its monetary easing cycle in 1Q2018, “activity has been broadly muted, as liquidity remains tight,” CI Capital says. As liquidity was tight, the 550 bps rate cuts the CBE has enacted have yet to take full effect on the economy. By increasing money supply in tandem with reduced interest rates, credit growth and private sector lending for investments are all expected to rise, thereby kicking off the economic growth cycle.

More liquidity and lower interest rates should see inflation-adjusted credit growth at north of 12% in 2020, compared to -6.6% on average over the past three years, CI Capital says, suggesting that the acceleration of investment will be supported later on by a recovery in consumption levels.

Don’t expect an influx of liquidity to put significant downward pressure on the EGP, even as demand for the currency will ease slightly on the back of increased supply, the CI team argues. The investment bank expects the EGP to depreciate 5-8% during the current fiscal year and projects an average FX rate of EGP 17.11 to the greenback in FY2020-2021.

The liquidity release will likely be complemented by more rate cuts next year, but don’t expect another cut in November, CI Capital says. The economists expect the CBE’s Monetary Policy Committee to keep rates on hold when it meets next month, and suggest that a 250-300 bps rate cut is in the cards over the course of 2020. Sigma’s view seems to support the suggestion that the CBE will hold off on rate cuts for a little while, as the research house expects the main monetary policy tool that will be in play is RRR.