The two-day Russia-Africa summit kicks off tomorrow in Sochi: Leaders from more than 50 African countries will gather at the Black Sea resort town to discuss strengthening economic ties with Moscow. The event, which will be chaired by President Abdel Fattah El Sisi (wearing his African Union hat) and Russian President Vladimir Putin, will feature panel discussions on issues ranging from Russian-African cooperation in energy, trade and infrastructure investment to collaboration in science, technology and digital security.

President Abdel Fattah El Sisi will also hold a highly-anticipated meeting with Ethiopian Prime Minister Abiy Ahmed to discuss the currently gridlocked talks over the Grand Ethiopian Renaissance Dam. We have more on this in this morning’s Diplomacy + Foreign Trade, below.

The Ruskies are expected to make some sort of announcement pertaining to the USD 7 bn Russian Industrial Zone (RIZ) in Egypt during the summit, Andrei Slepnev, director general of the Russian Export Center (REC), said in an interview with Russian outlet Ria. Some 55 Russian manufacturers have expressed interest in setting up shop in the zone, which is expected to produce USD 3.6 bn-worth of products by 2026.

A delegation of US companies will be in Cairo on 18 November to explore investments in the energy, health and information technology sectors as part of AmCham’s US-Egypt Proposer Forum, CEO Sylvia Menassa said, according to the local press. AmCham will also participate in a Washington conference focused on water issues on 30 October, and hold the ‘Prosper Africa Event’ on 7 November.

Other key dates to pencil into your agendas this week and next: 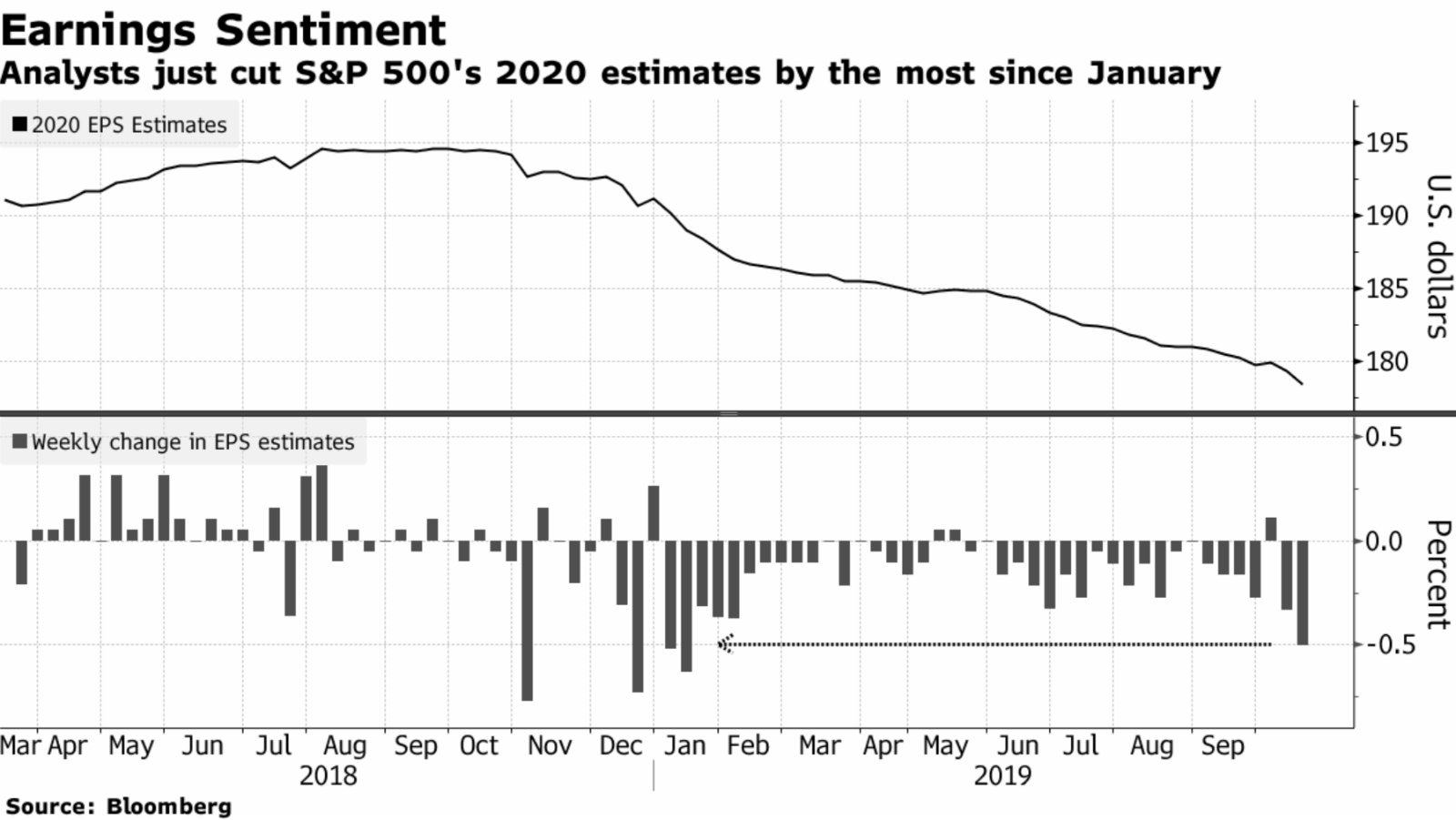 Cause for optimism in emerging markets as rate cuts offset trade tensions: Central bank stimulus is producing “patches of growth stabilization” in emerging markets, helping them withstand headwinds generated by the US-China trade conflict, portfolio managers at Templeton Emerging Markets Investment Trust wrote in a note yesterday. “We expect this trend to continue with rate cuts in a number of larger EMs, including India, Brazil, Russia and Mexico. Coupled with improving earnings expectations and relatively undemanding valuations and dividend yields, we believe the outlook for EM equities remains attractive,” they said. CNBC has more.

The same can’t be said for 2020 US earnings estimates. Analysts have cut combined S&P 500 earnings estimates in 2020 by 0.5% to USD 178.40 a share — the largest weekly drop since January, Bloomberg findings show. This comes despite solid quarterly earnings in the banking and healthcare sectors released last week, and projections for S&P 500 profits to grow 10% next year. But with last year’s 4Q slump fresh in the minds of investors, strong 2020 estimates will be needed to inspire confidence, analysts say. “For the market to meaningfully take a step to the upside, investors need to have greater conviction that you’re going to get high single digit or better earnings growth,” said Jeremy Zirin, head of Americas equities at UBS Global Wealth Management. 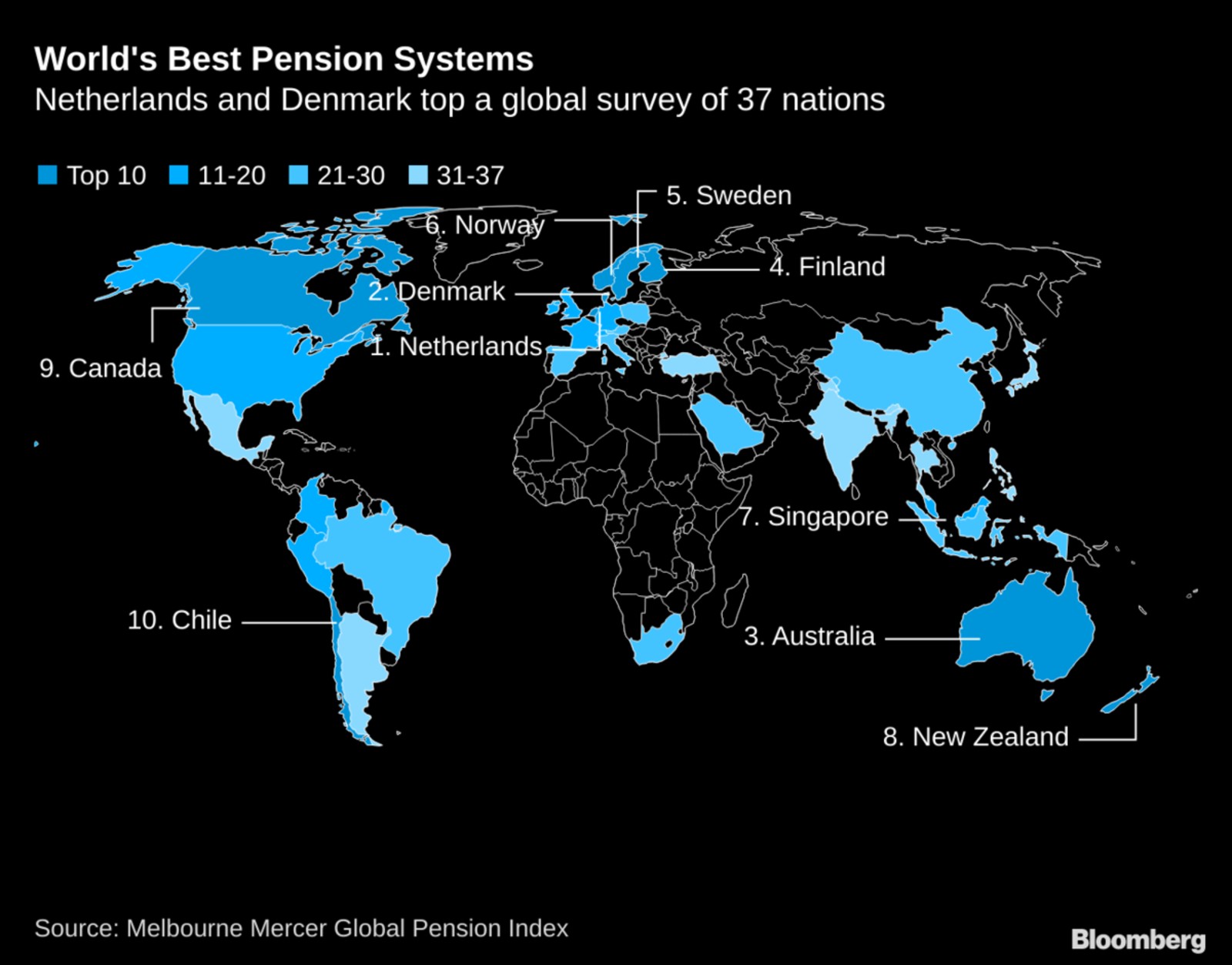 The Netherlands and Denmark top this year’s Melbourne Mercer Global Pensions Index, a global survey of 37 nations that assesses the best pension systems in the world, Bloomberg reports. The survey aims to assess whether each pension system leads to improved financial outcomes for retirees, its sustainability, and whether it engenders community trust. Australia, Finland, Sweden, Norway, Singapore, New Zealand, Canada and Chile all scored high, while the UK came in at 14th place and the US at 16th. Lagging behind are Japan, at 31, and Thailand, at the bottom.

With the “you break it, you buy it” principle in play: SoftBank to take control of WeWork. Japanese conglomerate SoftBank Group is on the verge of taking over troubled work space company WeWork, sources familiar with the matter have said. CNBC reports that SoftBank will inject bns in fresh capital and hike its stake to 70%. The agreement would value WeWork at between USD 7.5-8 bn on a pre-funding basis — a far cry from the USD 47 bn valuation it had sought in what turned out to be its “nightmare IPO.”

Lebanon passes emergency economic reforms as protesters hit the streets: Lebanese politicians yesterday approved a package of emergency economic reforms as demonstrators continued to take to the streets in protest at the government’s management of the economy. Prime Minister Saad Al Hariri announced in a televised speech yesterday that the government would cut the salaries of ministers and lawmakers in half, place a 2% tax on bank profits and reform the state-owned power sector in an effort to eliminate its budget deficit next year. The central bank will also cut USD 2.9 bn from its local-currency interest bill and charge lenders a one-off fee. The protests were initially sparked by a government proposal to place a tax on WhatsApp calls, which they scrapped last week in response to the public reaction. Reuters and Bloomberg have the story.

Bibi throws in the towel trying to form an Israeli government: Israeli Prime Minister Benjamin Netanyahu has for the second time since April failed to form a government, and will pass the baton to his Labour Party opponent Benny Gantz to try and break the political gridlock, CNN reports.