It’s the final day of the IMF and World Bank annual meetings. Egyptian officials in Washington, DC, for the gathering had another busy few days over the weekend meeting with officials and members of the business community — and the world’s central bankers have promised to use “all appropriate policy tools” to stem the slowdown in global growth. We have the full rundown in this morning’s Speed Round, below.

House committee begins discussions to pave way for Euroclear: The House of Representatives’ econ committee will today begin discussions on government-proposed amendments to the Central Depository and Registration Act, the local press reports. The amendments will see the establishment of a new holding company to handle debt issuances in light of the Euroclear agreement signed over the weekend. We have more on this in our Speed Round, below.

FinMin outlines in-the-works Customs Act amendments: The Finance Ministry was out yesterday with a breakdown of the broad strokes of proposed amendments to the Customs Act. A final draft of the changes — which are expected to expedite customs clearance, create a “whitelist” of trusted importers, and broaden the discretion of the Customs Authority — was released last year, but the bill still remains under discussion in the House of Representatives.

Key dates to pencil into your agendas this week and next as we wrap up the month:

The two-day Russia-Africa summit gets underway in Sochi on Wednesday, 23 October: Leaders from more than 50 African countries will gather at the Black Sea resort town this week to discuss strengthening economic ties across a range of sectors with Moscow. The event, which will be chaired by President Abdel Fattah El Sisi and Russian President Vladimir Putin, will feature panel discussions on subjects ranging from Russian-African cooperation in energy, trade and infrastructure investment to collaboration in science, technology and digital security.

What we’re keeping our eye on: 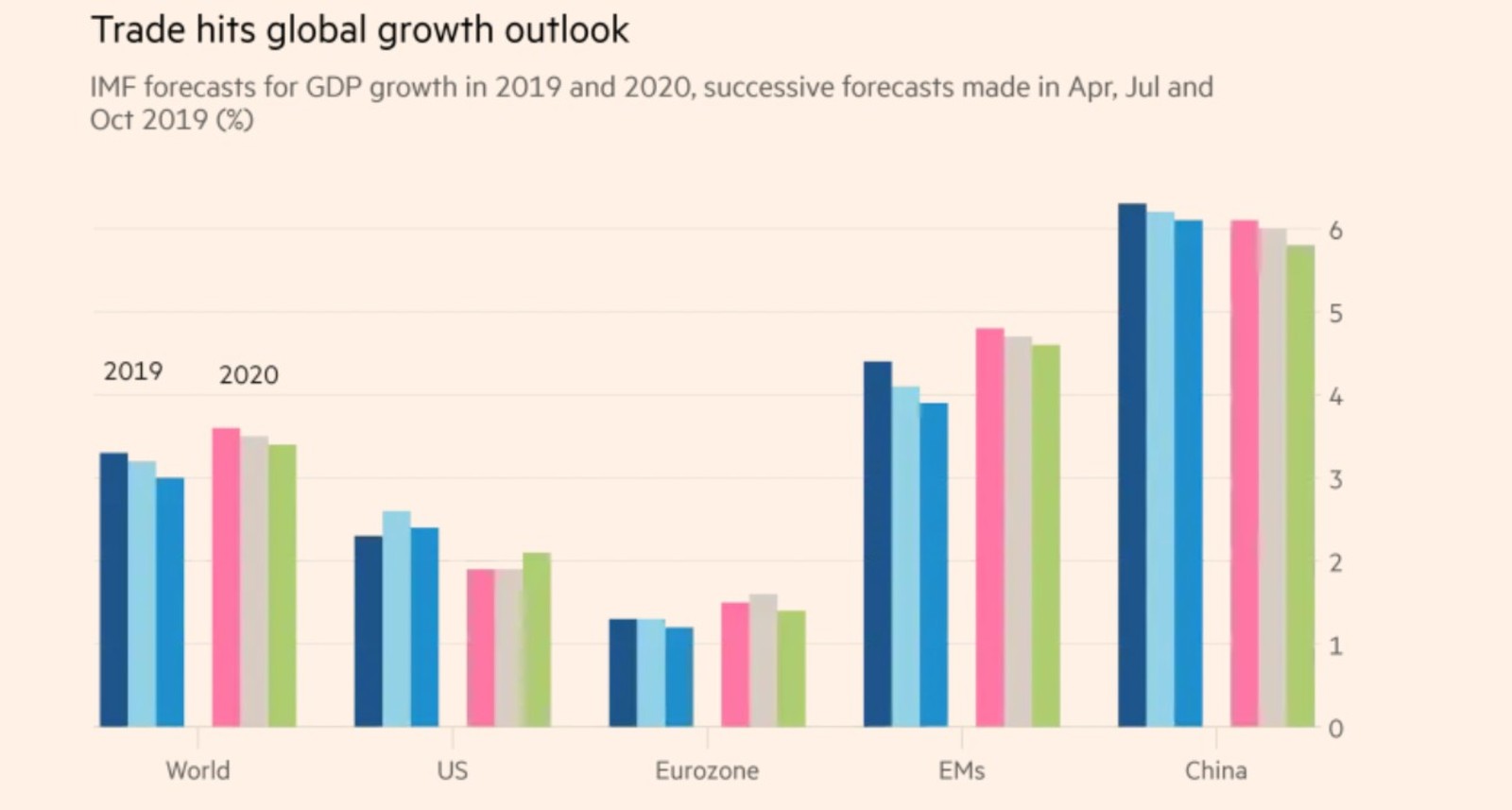 Equities could see a healthy rally to close out the year, bumping up EMs and Europe: The prospect of a US-China trade agreement, greater spending by Germany and China, a further 50 bps interest rate cut by the US Fed, and a smooth Brexit transition could all drive equities higher in the coming six months, the Financial Times says. Look for the USD to weaken against EM currencies and for EM and European shares to possibly out-perform Wall Street, the salmon-colored paper remarks.

SIGN OF THE TIMES- China reports 30-year record low growth figures, worsening concerns over global slowdown: China’s economy is growing at the slowest rate in about 30 years as the recent trade war, a fall in global growth, and the Hong Kong protests are catching up with economic performance, according to the Financial Times. Unlikely to get back to the double-digit rates that characterized its growth up until this decade, China needs to start planning for the side effects of a slowdown — particularly unemployment.

Embarrassment for Johnson as Brexit saga takes another turn: UK PM Boris Johnson has been forced to do something he had sworn never to do — request an extension to the 31 October Brexit deadline. The House of Commons was supposed to vote on his Brexit agreement with the EU yesterday, but a last-minute bill to delay the meaningful vote was narrowly passed, ensuring that the drama will continue for at least a few more weeks. (BBC)

Across the pond, Canadians will head to the polls tomorrow in a federal election. It’s neck-and-neck between Justin Trudeau’s governing Liberal Party and Andrew Sheer’s Conservatives. Check out CTV, CBC or the Global and Mail for more.