Headline inflation falls again in September, clearing the way for more rate cuts: Egypt’s annual headline inflation rate dropped for the fourth consecutive month to 4.3% in September from 7.5% in August, its lowest recording in nearly seven years, according to Capmas data (pdf) released on Thursday. Annual urban inflation decelerated to 4.8% — the lowest it’s been since November 2012 — according to central bank data (pdf). Annual core inflation almost halved to 2.6% in September from 4.9% in August. Monthly core prices fell 2.3% compared to -0.4%. Reuters and Bloomberg also have the story.

Headline vs. core: Headline inflation accounts for a basket of goods and services in an economy while core inflation removes volatile products such as food and fuel.

Food and beverage price inflation plunges: The slowdown was driven primarily by food and beverage prices, which grew just 0.3% y-o-y. “This is a key success factor in controlling inflation and reaching low levels,” Radwa El Swaify, head of research at Pharos, told Bloomberg. “The government focused efforts this year on the supply of food in the market to control any volatility in its price, and that is why inflation has continued to be lower than expectations for several months.”

Adjusting the base year: The CBE and Capmas calculated last month’s inflation figures according to an adjusted base period, with the base year now set at September 2018 instead of January 2010. It also used new weights taken from the Household Income, Expenditure and Consumption Survey (HIECS) 2017/2018 to better reflect consumption patterns. Weightings for food and beverages, clothing and footwear and communications were all reduced, while the remaining nine categories were increased.

The base effect remains a key factor in explaining the lower inflation readings, alongside the strength of the EGP and “more cautious spending behavior,” Beltone Financial said in a research note. Food and beverages, which is usually a prime source of inflationary pressure, showed negative growth for the first time at -0.6%, compared to 6.1% in August.

The surprisingly low inflation reading pushed up the stock market, with the benchmark EGX30 index rallying to close at 0.8% on Thursday, driven by index heavyweight CIB rising 0.3% and Cairo for Investment and Real Estate Development (CIRA) rising 3.9%.

Successive months of plummeting inflation all but ensures more monetary easing ahead. The fast-paced deceleration makes it likely that the CBE will move to cut rates again when it next meets on 14 November, albeit at a slower pace of 50 bps, Eskaros said. Beltone also predicts “benign” inflation readings until the end of the year, giving the CBE room to push on with its aggressive easing cycle. The investment firm anticipates a 50-100 bps cut during the November meeting. EFG Hermes’ Mohamed Abu Basha, meanwhile, suggests that inflation could pick back up again towards 8-9%. Despite this, he expects a 100 bps cut next month. 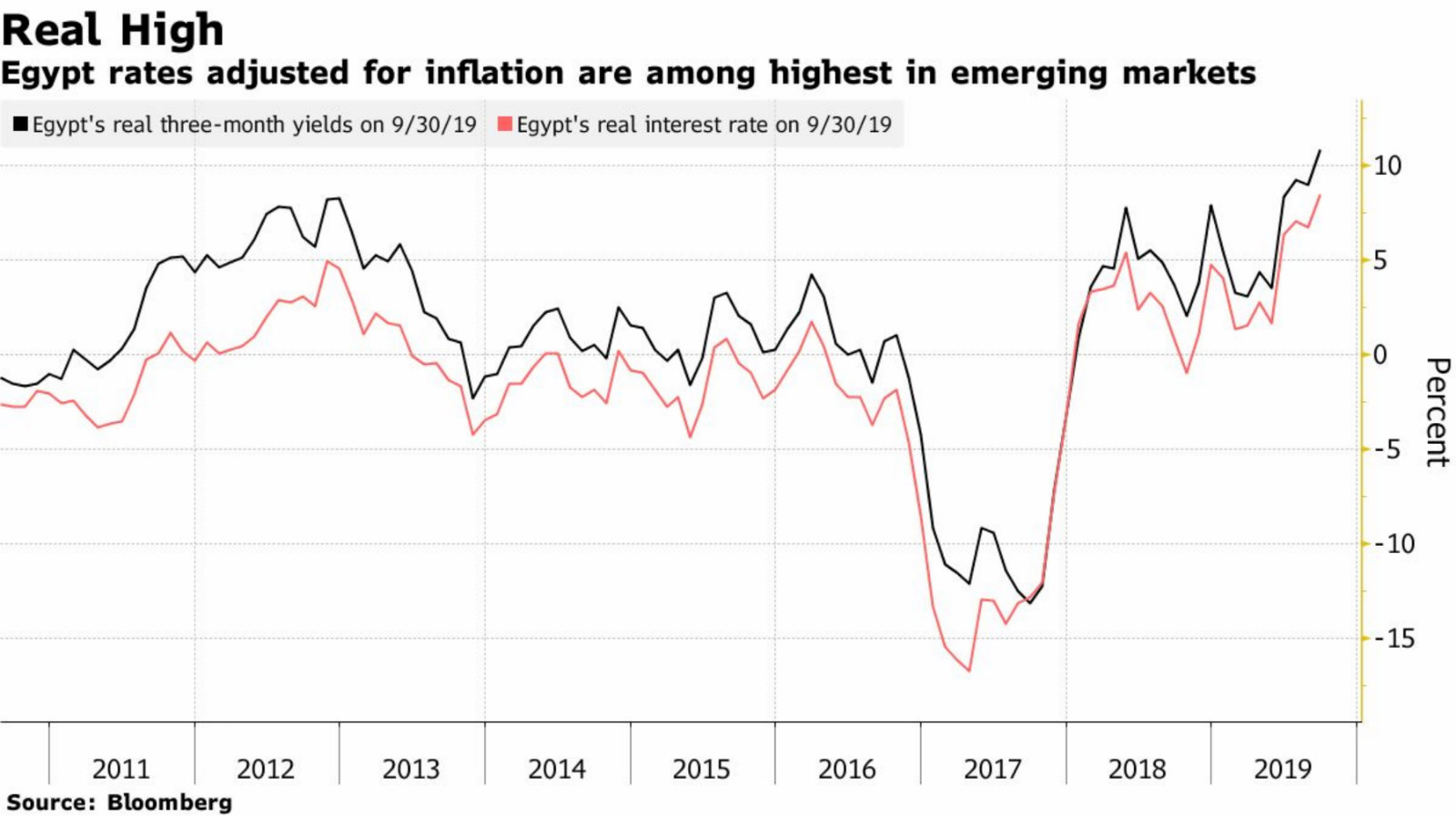 Real interest rates among the best in the world: The latest figures mean that Egypt’s inflation-adjusted interest rates have now risen to 8.5% — despite the CBE cutting interest rates by 250 bps over the past two months. Real interest rates have now overtaken Turkey and Ukraine to become among the highest in the world, Bloomberg says. The EGP saw its biggest rally since the middle of September after the inflation figures were released, making it the world’s second best performing currency against the USD after Ukraine’s hryvnia. That said, EFG’s Abu Basha warns that inflation may accelerate over the next few months, putting pressure on real rates.