Welcome back from a slightly extended weekend break: We’re picking up where we left off on Thursday with another bumper issue. T’was a busy weekend indeed.

The Ruskies are here for business: Russian Trade Minister Denis Mantrov landed in Cairo on Thursday at the head of a business delegation that will be in town until 10 October for a joint forum to discuss cooperation in various fields. Trade Minister Amr Nassar met Mantrov on Thursday ahead of the inauguration of the forum, which will see participation from 110 SMEs and large firms, according to a cabinet statement.

EAEU freetrade talks tomorrow: The third round of negotiations for a freetrade agreement between Egypt and the Eurasian Economic Union (EAEU) will be held in Cairo tomorrow.

Monthly inflation figures for September are due at the end of the week. Inflation cooled for the second consecutive month in August to 7.5%, marking the lowest reading in six-and-a-half years.

The Information Technology Industry Development Agency (ITIDA) is getting involved in the GITEX Technology Week, which kicked off yesterday at the Dubai World Trade Center. The event wraps up on Thursday, 10 October.

Stat of the morning: 8%. That’s how many women occupy senior roles in private equity firms around the world, Sabrina Willmer writes for Bloomberg. Most investment outfits only have one or two women in senior positions, despite there being “dozens” of these positions. Who came out on top? “Bloomberg’s analysis found that Carlyle Group LP put the greatest number of women in senior investment roles, 15, while TPG had the biggest proportion, with women accounting for 14% of its team.” 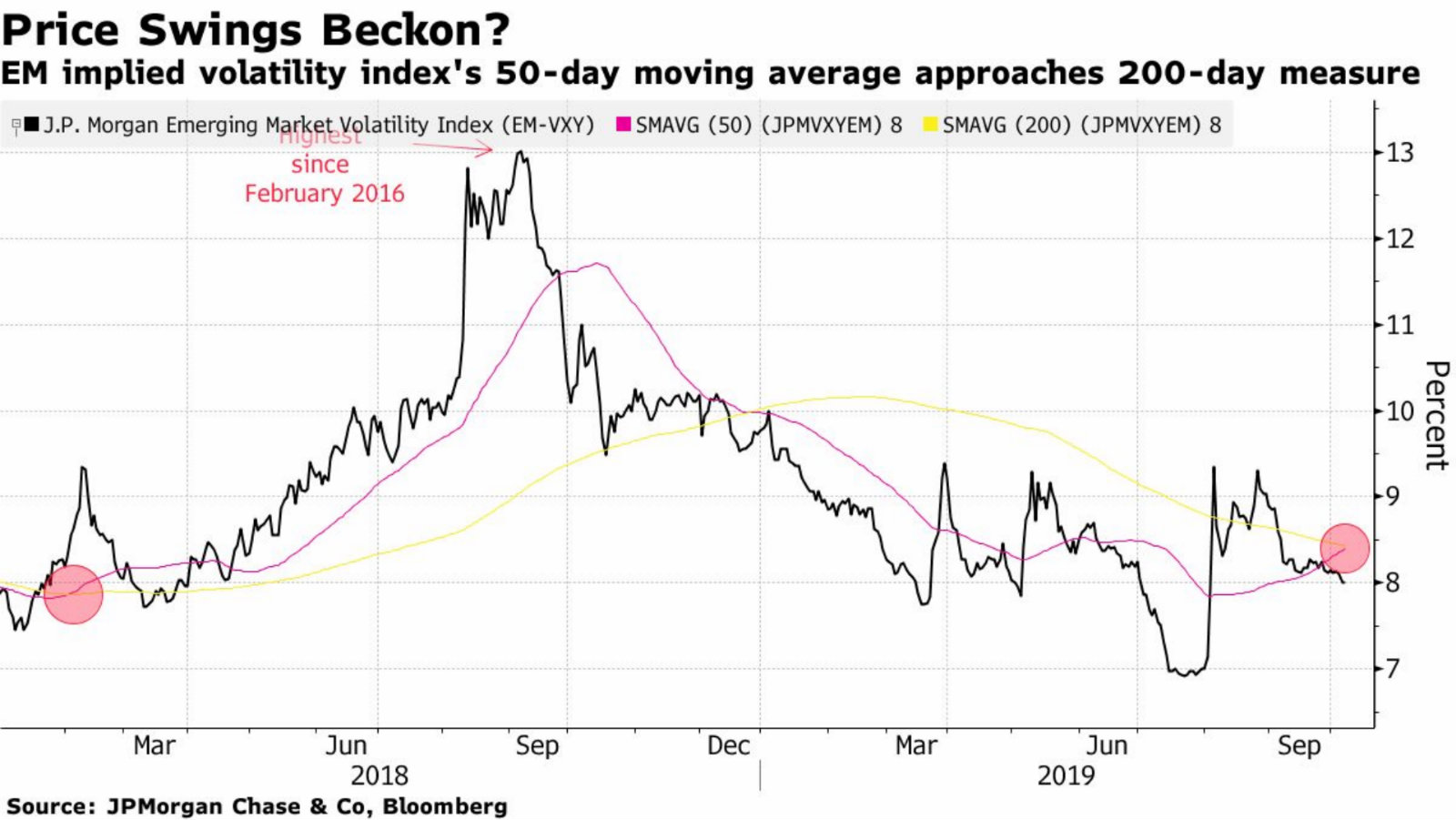 Volatility in EM currencies is set to rise as the US and China resume high-level trade talks this week and investors await clues from Federal Reserve Chairman Jay Powell about whether the central bank will make a third consecutive rate cut when it meets later this month. Bloomberg reports that the 50-day moving average of JPMorgan’s EM currency volatility index is close to moving above the 200-day average. The last time this happened in February 2018, volatility hit two-and-a-half-year highs in September that year.

HSBC could slash 10k jobs: A further 10k people could be made redundant at HSBC as interim CEO Noel Quinn pushes ahead with a dramatic cost-cutting plan, the Financial Times reports. The bank already announced plans to cut 4.7k jobs in August amid what it said was “an increasingly complex and challenging global environment.” 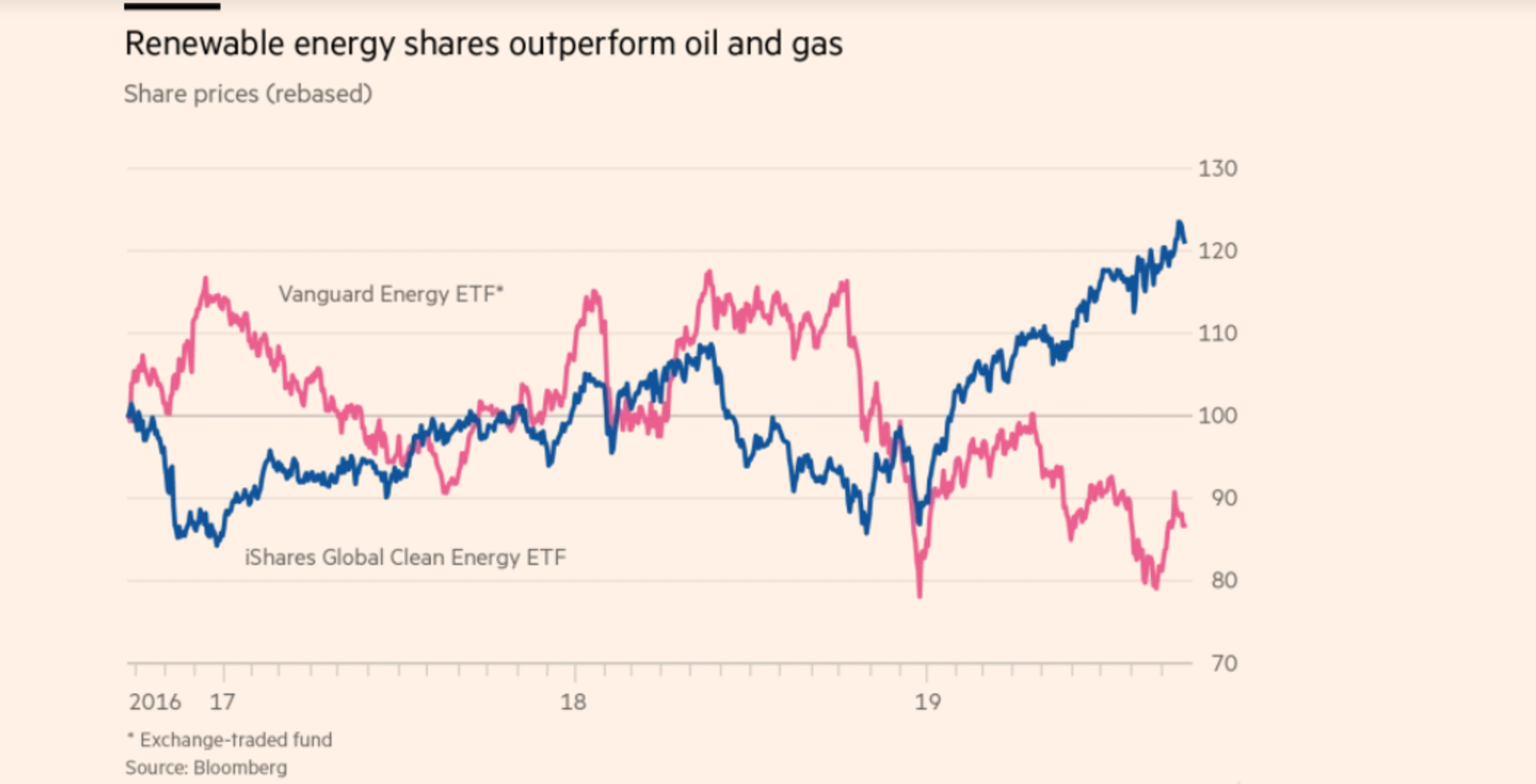 Renewable energy stocks have been outperforming fossil fuel shares this year on the back of a sharp drop in wind and solar energy costs, with the iShares Clean Energy ETF’s 32% rise “streaking far ahead” of the Vanguard Energy ETF, according to the Financial Times. Renewables are also benefiting from global monetary easing, since wind and solar projects require large capital but have lower operating costs. The rally has continued in spite of a decline in investment during 1H2019, caused by falling government subsidies for clean energy. The increasing prominence of climate change as a global issue has helped investor sentiment remain positive.

Turkey is due to begin drilling for oil and southwest of Cyprus, despite Greek Cypriot authorities having awarded exploration rights in the area to Italian and French companies, Reuters reports. While offshore rights have long been a topic of debate between Ankara and Nicosia, Turkey’s recent drilling of two wells has provoked strong protests and EU sanctions, heightening tensions in the region.

Egypt has issued a statement in support of Cyprus and its sovereignty, stating that unilateral actions that violate Cypriot rights threaten security and stability in the region. 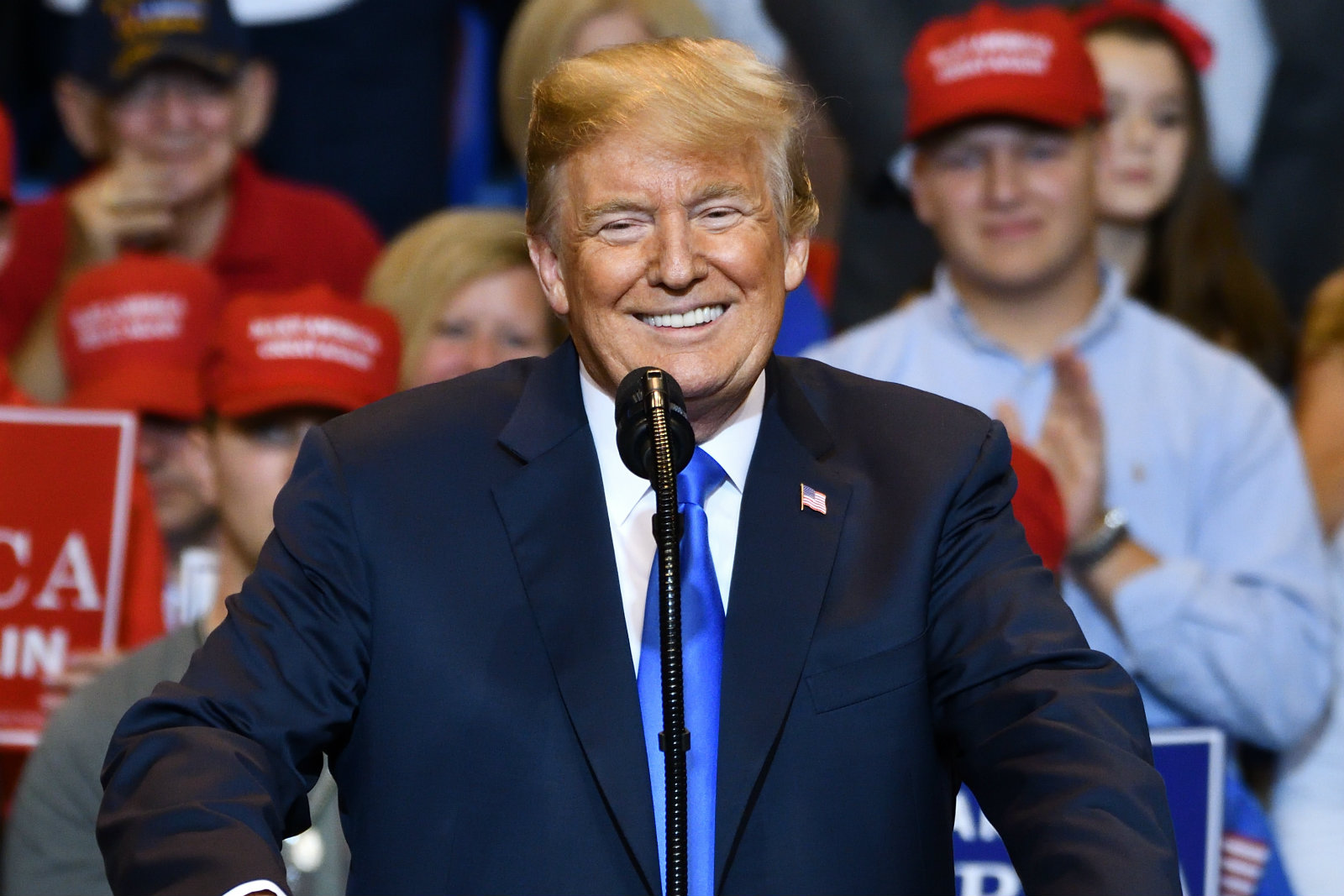 Are the walls starting to close in around Trump? The small matter of facing an impeachment investigation became all the more treacherous for The Donald yesterday after a second whistleblower came forward to corroborate damaging claims regarding his contact with the Ukrainian president. Trump is alleged to have pushed President Zelensky to investigate political rival Joe Biden and his son over potential corruption. The Associated Press has more.

Startupbootcamp graduate El Gameya wins Al Baraka Bank competition at FinX: El Gameya, a mobile app based on the Rotating and Savings Credit Association model, won the P2P Syndicate Finance Prize at the FinX Awards ceremony held in Dubai last week, our friends at Pharos told us over the weekend. El Gameya is one of 10 startups that recently graduated from Startupbootcamp Pride Fintech Cairo accelerator. Startupbootcamp was also named the MENA FinTech Accelerator of the Year.