One way Egypt can get lower interest rates? Have fewer babies 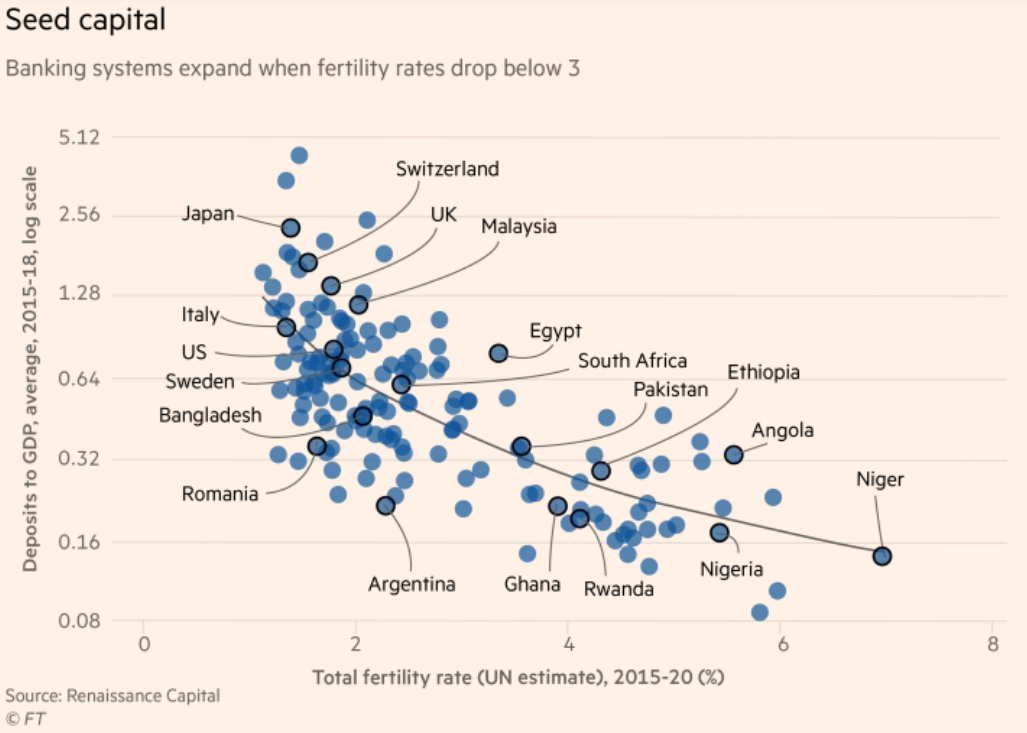 One way Egypt can get lower interest rates? Have fewer babies, suggests RenCap’s Charlie Robertson: It appears that there’s a correlation between Egypt’s high interest rates and its 100 mn population, according to analysis posed by Charles Robertson, chief economist at emerging markets-focused investment bank Renaissance Capital. Analysts at the bank have found a statistical relationship between fertility rates and bank deposits-to-GDP — a 53% correlation and one that has been holding up since the 1990s, Robertson tells the Financial Times (paywall). Higher deposit-to-GDP ratios leads to lower borrowing costs on the whole. Data appears to support this, as countries with deposit-to-GDP ratios of at least 60% in 2013 have had average one-year real interest rates of 0.9% between 2014 and 2018, compared with 2.1% for countries with deposit-to-GDP ratios of between 20-30%. He also suggests that states with higher deposit-to-GDP ratios have higher levels of investment.

The problem with high-population emerging markets is a tendency to not save. “People with lots of kids don’t save money,” he says. This is not only because they have more dependents to support and therefore less ability to save, but also because people with fewer children need to save for retirement because they are less able to rely on their offspring to provide for them in their dotage, he added.

Where does that leave us? With a very positive outlook going forward (if fertility rates decline): RenCap’s data suggests Egypt, alongside Ghana, Kenya and Pakistan, could see bank deposits double to at least 60% of GDP over the next 20 years. This is assuming that fertility rates continue to fall by about 0.4% a decade, as has happened in the past 10 years, potentially leading to a more than halving of real interest rates. “Egypt already looks well placed to fund its own investment, when lower government borrowing stops crowding out the private sector.” Robertson sees this trend happening for Morocco, Jordan and Vietnam as well.