It’s a relatively quiet news morning today with no single story dominating the headlines here at home or abroad.

Inflation figures for August are out this week: The Central Bank of Egypt and Capmas will release the monthly inflation figures in the coming days. Inflation fell unexpectedly to a four-year low of 8.7% in July.

Three conferences get underway in the capital tomorrow: 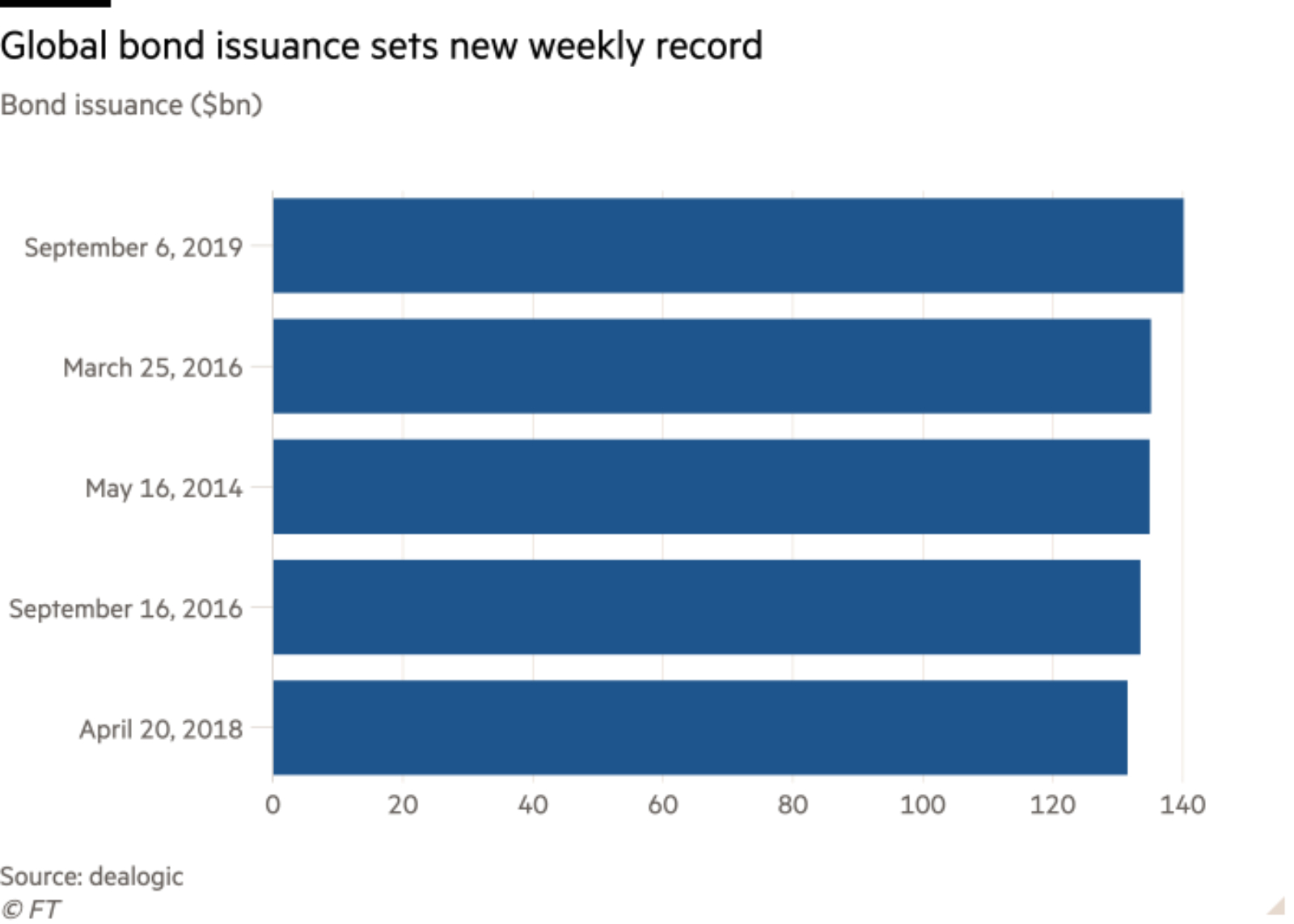 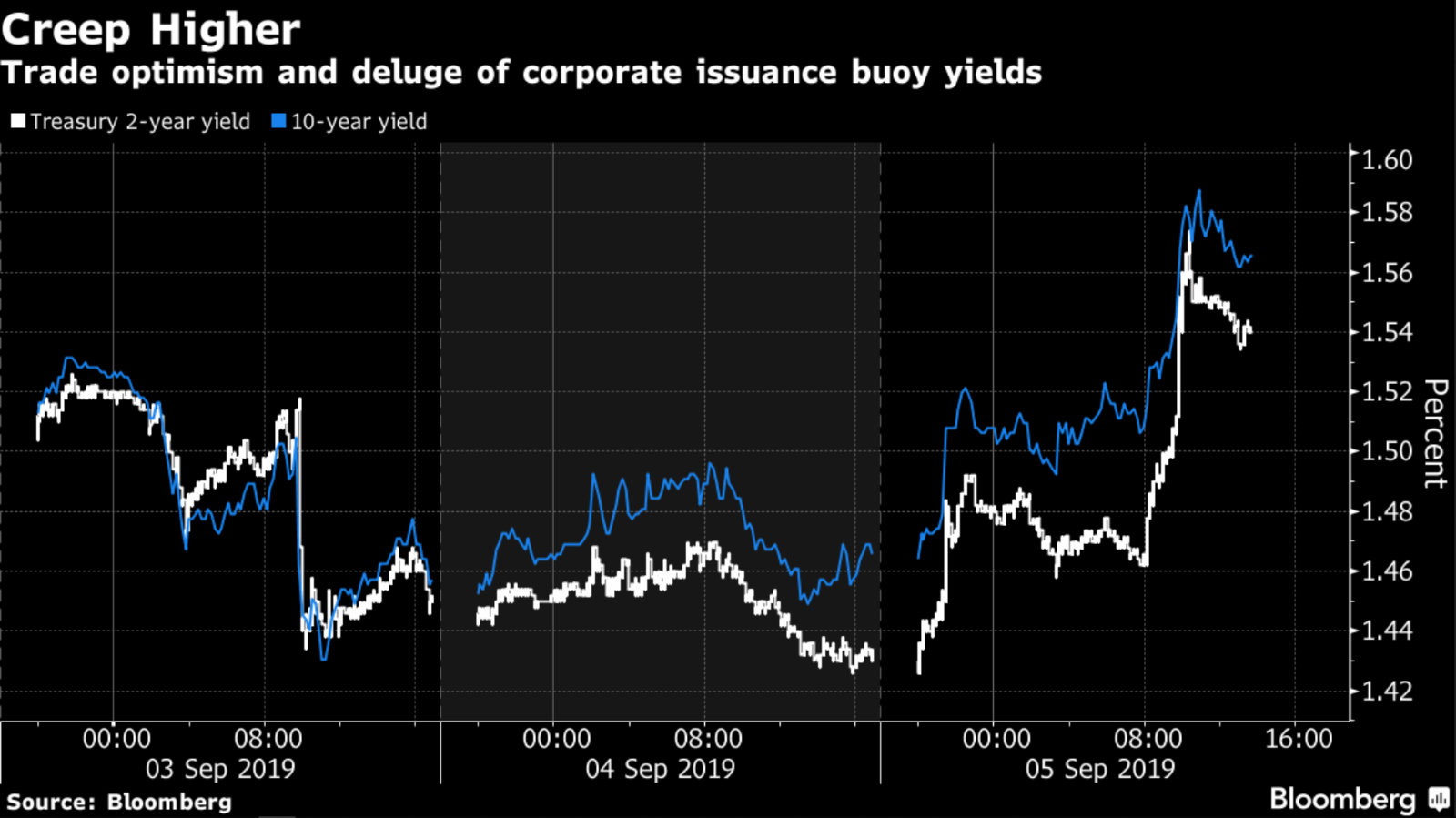 Yields responded accordingly: The deluge of corporate issuances contributed to a surge in US and German bond yields on Thursday, interrupting the rally in August that saw yields across the world sink to record lows, Bloomberg says. Rates on two-year bonds were at one point up 14 points, while the iShares ETF tracking long-term bonds suffered its biggest daily loss since the election of Donald Trump. “Treasuries are not a one-way trade, even as the trend is for lower yields,” said Scott Buchta, head of fixed income strategy at Brean Capital. “It’s a risk-on related move today given trade-talks are back on. But the backdrop of the high level of corporate issuance is also adding some volatility and putting upside pressure on Treasury yields.”

Equity investors are currently faced with a situation of “eerie similarity” to last year’s near-recession when the US stock market was close to losing USD 5 tn in value, Elena Popina and Vildana Hajric write for Bloomberg. But there was no recession then, even though the two factors that are spooking investors today were at play at the time: An all-out US-China trade war and factory output woes. What’s most significantly different now is the more proactive US Fed, whose chairman Jay Powell said over the weekend it is “going to continue to watch all of these factors, and all the geopolitical things that are happening, and… act as appropriate to sustain this expansion.”

Al-Faleh “out of favor” as Salman taps his son as Saudi’s new energy minister: Saudi Arabia’s King Salman has appointed his son Prince Abdulaziz bin Salman bin Abdulaziz Al Saud as the kingdom’s new energy minister, succeeding Khalid Al-Faleh, according to a Saudi Press Agency statement. Al-Faleh was also replaced as the chairman of Saudi Aramco last week, with former royal court advisor and the head of the country’s sovereign wealth fund Yasir Al-Rumayyan assuming the position ahead of the oil giant’s imminent IPO. “In the murky world of Saudi politics, it wasn’t immediately clear why Al-Falih [sic] fell out of favor. It has been speculated that there was dissatisfaction with the low price of oil as the vital Saudi Aramco IPO nears,” says Bloomberg.

Samsung is releasing a new version of the Galaxy Note 10 that incorporates blockchain in a move that could help to demystify the technology, sources tell the WSJ. The new “KlaytnPhone” will reportedly come installed with blockchain apps, a wallet for cryptocurrencies, and a certain amount of a new digital currency, called “Klay” coins, for buyers to use. Advocates of the technology believe that offering a ready-made blockchain ecosystem will help it take off, and ultimately offer consumers more security.

And for the iSheep among us: Apple is set to unveil three new iPhone models on Tuesday at an event that gets underway at 6 pm CLT. You can get an idea of what to expect from the new models from these rundowns courtesy of Bloomberg, TechRadar, or MacRumors. Or, you know, wait and see: You can watch the event live at the appointed hour.

Egyptian nuclear scientist Abu Bakr Abdel Moniem passed away on Wednesday in Marrakech, where he was attending an energy conference, according to Youm7. Preliminary medical reports indicate he suffered from a heart attack.