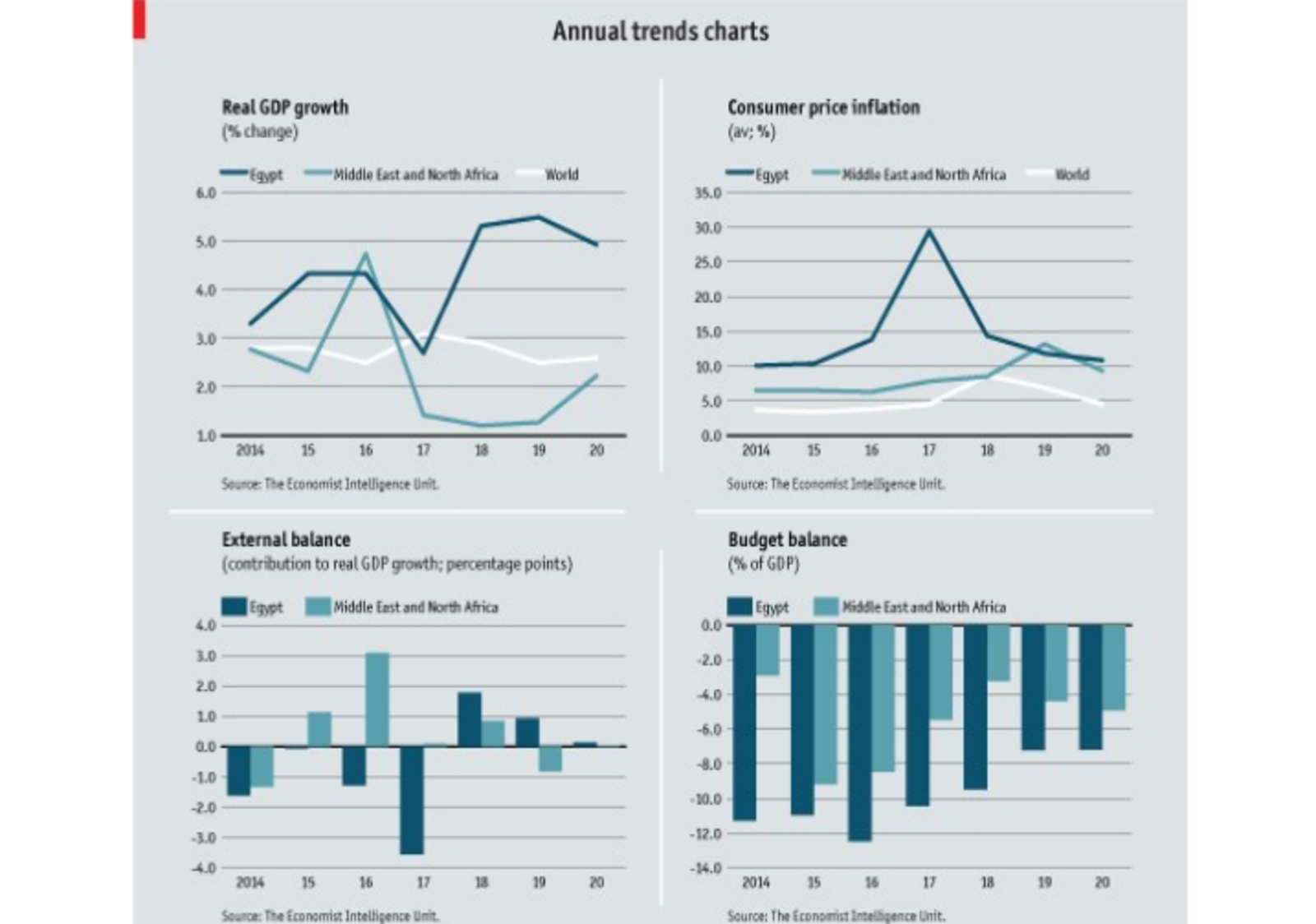 Egypt’s economy will grow at a 4.5% clip this fiscal year before accelerating to 6.0% in FY2021-2022, the Economist Intelligence Unit (EIU) said in a report last week (pdf). The forecast for the current fiscal year is much more modest than the government’s target of 6.0% outlined in the state budget. According to the EIU, measures to balance the tough reform program with “containing public discontent,” including raising public sector wages, will weigh on Egypt’s fiscal position, but tax revenues will improve public finances over the next four years “in tandem with robust GDP growth.” The report expects Egypt’s fiscal deficit to narrow to 6.0% of GDP by FY2022-2023, from 9.5% in FY2017-2018 on the back of lower spending on subsidies and higher tax revenues. “The current account will move into surplus from 2021, owing to lower oil import costs in the second half of the forecast period and as export growth outpaces import growth.” Inflation, meanwhile, is expected to average 11.8% this fiscal year before gradually cooling to 7.5% by FY2022-2023.

Economic, fiscal, and regulatory reforms are expected to continue past the end of the IMF program, the EIU says, “although business-related structural reforms will proceed slowly owing to opposition from vested interests within state bodies.” The report also notes that it does not expect Egypt to seek further funding from the IMF to support the remainder of its reforms. Finance Minister Mohamed Maait had said in June that Egypt is in talks with the IMF over a non-loan program and is hoping to reach a final agreement by next month.

The report identifies a few “major risks” to Egypt’s economic outlook, with a slowing pace of socially sensitive reforms due to concerns about popular unrest seen as a high probability risk with a high impact. Other risks with a moderate probability of occurring include the government raising corporate taxes on the back of fiscal pressure, increased volatility in the EGP from negative foreign assets (both of which would have a “very high” impact on the economic outlook), and investments being deterred from “opaque legal proceedings.” The EIU also sees a moderate probability of a sustained terrorist campaign that would negatively affect tourism.