Good morning, friends, and welcome to yet another slow news day. We have coverage of the final day of the G7 — during which El Sisi met with US, UK and French leaders — as well as the news that we’ve signed the final USD 500 mn agreement with India’s Lulu Hypermarket for a series of new shopping malls. Aside from that, it’s tumble weeds as far as the eye can see. We do hope that things start happening again soon.

Fresh from the G7 summit, President Abdel Fattah El Sisi is heading immediately to Yokohama, Japan, to take part in the Tokyo International Conference on African Development (TICAD), Ahram Online reports. The event begins tomorrow and will run until 30 August.

The G7 summit came to a close yesterday, rounding off a busy three days that were mostly focused on The Donald and his beef with China. The US president struck a more conciliatory mood yesterday, hinting at delaying or canceling raising tariffs on Chinese products just 24 hours after telling reporters he regretted not going higher with the hikes. Trump coupled his about-face with claims that China had initiated a resumption of trade talks, prompting Chinese Foreign Ministry spokesperson Geng Shuang to say he was “not aware of” China making such a phone call.

Chinese vice-premier Liu He maintained in separate remarks that China wants to de-escalate hostilities. “An escalation of the trade war is not good for China, it’s not good for the US, and it’s also not good for the interests of people across the world,” he said.

Could a Trump-Rouhani meeting also be in the cards? Literally anything is possible. French President Emmanuel Macron appears to be on a diplomatic roll, announcing in a press conference that Iranian President Hassan Rouhani could be open to meeting Trump. The Donald also said a meeting would be possible, describing Iran as a country of “tremendous potential,” but ruled out lifting economic sanctions.

One positive non-Trumpian outcome from the summit: Pledges of financial support for the Amazon rainforest. International leaders at the summit vowed to provided USD 22 mn and immediate logistical support, including military personnel, to help battle the fires that have been raging in the Amazon for two weeks, the BBC reports.

The plan is being spearheaded by Emmanuel Macron, who has been embroiled in a war of words with Brazilian President Jair Bolsonaro over the fires, and who has threatened to block the EU-Mercosur trade deal if the crisis is not addressed. Bolsonaro, who initially claimed his government didn’t have the resources to tackle the fires, has since dispatched 44k troops and military aircraft to six states struggling with them. He has said that the support from the G7 treats Brazil "as if we were a colony or no man's land."

Wildfires in Brazil, though common in the dry season, have increased by up to 89% this year. This comes amid extensive rollbacks to environmental protections by Bolsonaro’s government, and a significant increase in deforestation. International outcry has abounded over the Brazilian government’s perceived lack of action to stop the fires, and now Brazilian businesses and trade groups, reportedly fearing boycotts of their products, are also strongly expressing their concern. 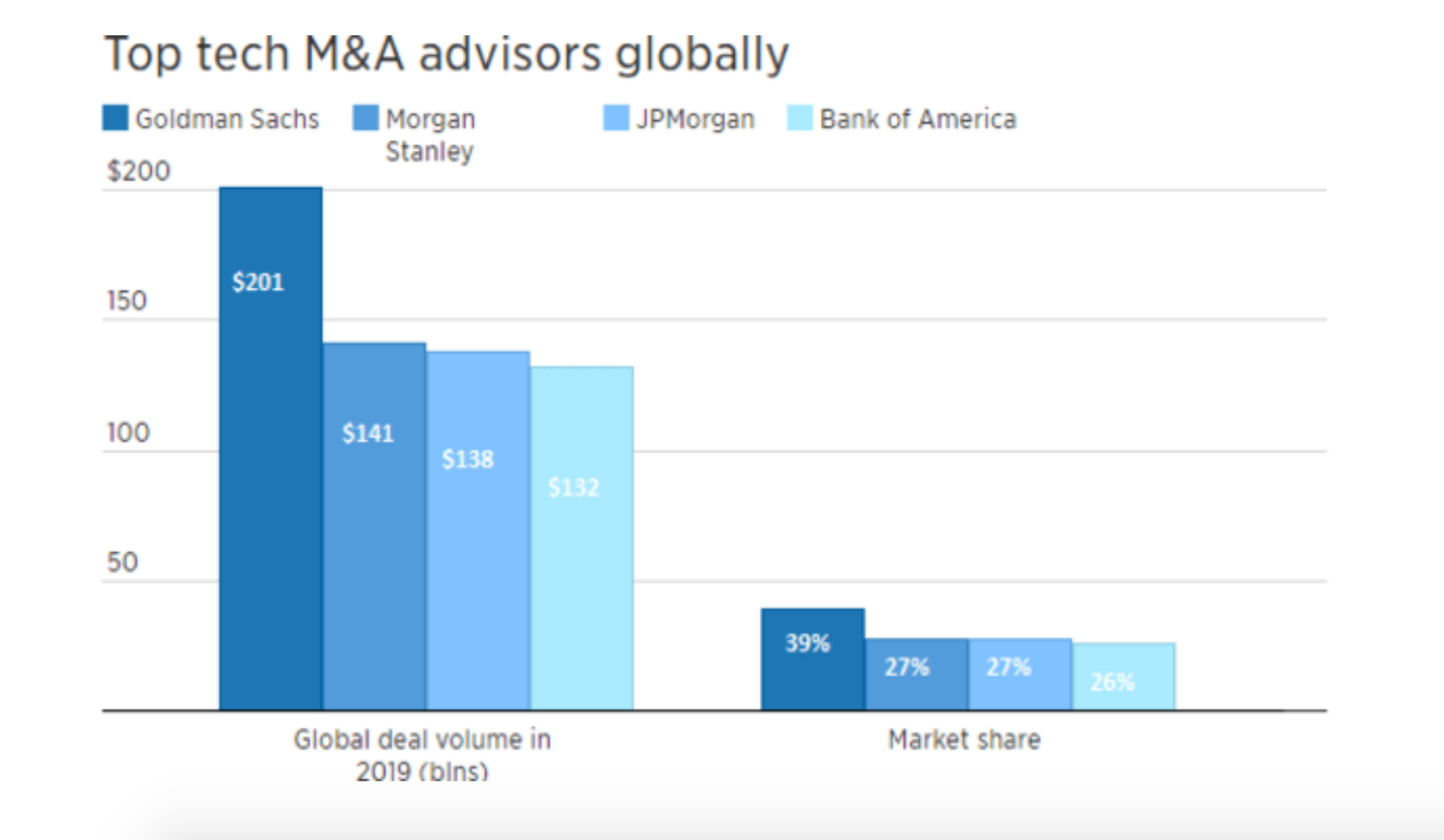 Goldman Sachs took the lion’s share of this year’s M&A transactions in terms of value thanks to its management of three major tech M&As, Alex Sherman writes for CNBC. Dealogic data shows that Goldman’s share of the tech M&A market has increased to 39%, taking a 12% lead over rivals Morgan Stanley and J.P. Morgan Chase. The investment bank was tapped to lead Salesforce’s USD 15.7 bn purchase of Tableau Software — this year’s biggest tech acquisition — as well as Ultimate Software’s USD 11 bn acquisition by a consortium of private equity outfits and Broadcom’s USD 10.7 bn acquisition of Symantec’s enterprise business.

Is WeWork’s IPO doomed to flop? Communal workspace WeWork’s planned IPO next month is “the most ridiculous IPO of 2019,” New Constructs Investment Analyst Sam McBride tells Yahoo Finance. According to McBride, WeWork has positioned itself as a tech company but is really no more than “a brick-and-mortar leasing business.” And as companies are beginning to face economic headwinds, one of the first cost-cutting measures they are likely to take is to lay off employees and cut down on office space — including coworking spaces offered through WeWork. Investors are already somewhat bearish on the company, which reported USD 900 mn in losses in 1H2019 and is now looking to raise some USD 3.5 bn when it goes public in September. 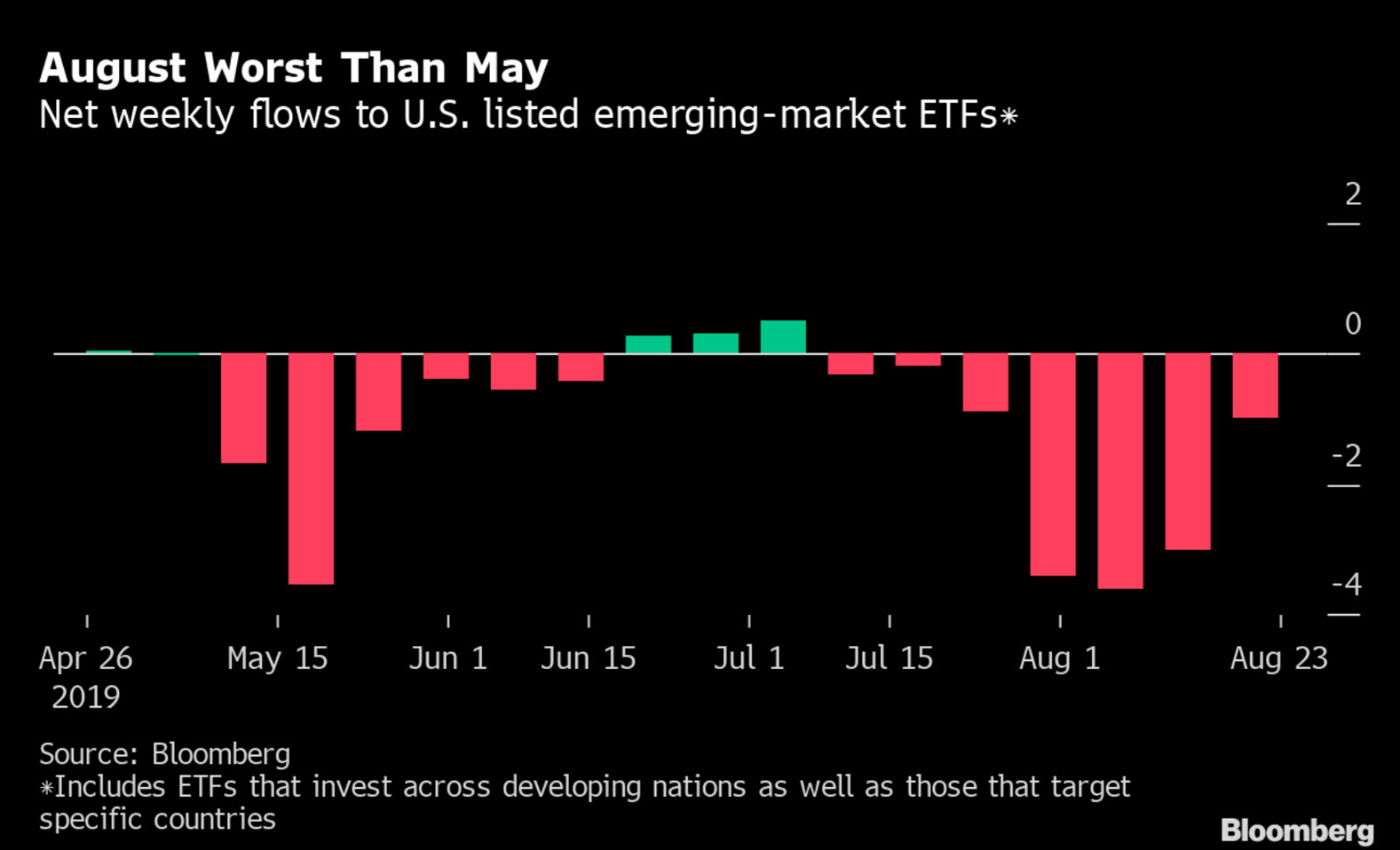 Yearly gains on EM ETFs have almost evaporated as trade fears bite: Gains made by EM ETFs this year have been all but wiped out after outflows extended into a seventh consecutive week, according to Bloomberg data. Investors withdrew USD 972.3 mn from US-listed ETFs last week, meaning net inflow now stands at just USD 109.9 nm for the year. Equity ETFs were responsible for the selloff, with the iShares MSCI EM ETF losing USD 556 mn. Bond funds meanwhile saw small inflows. The market has now lost USD 12.3 bn over the past seven weeks, substantially higher than the USD 7.8 bn loss during the six-week sell-off during May and June.

The weakening lira: A bad omen for EM currencies? The Turkish lira weakened against the USD on Monday “as Japanese investors cut risk assets” over concerns of the escalating US-China trade war, according to Reuters. The latest installment in the US-China soap opera pushed investors towards safe haven investments such as sovereign bonds and gold, and away from EMs such as Turkey. The rising tension “means that EM FX will continue to weaken for the foreseeable future. In the absence of a thawing in trade frictions it remains a market to be structurally short EM and buy USD on any dip,” according to currency analysts at Societe Generale.

Is Big Tech losing its luster? The likes of Facebook and Google, once seen as the pinnacle of cool for talented young creatives, are increasingly being run as “state-like global bureaucracies,” the Financial Times says. And with an increase in high-profile cases that call their ethics into question (ahem, Cambridge Analytica), a lack of diversity, and the very real costs of a burnout-heavy work culture, more prospective employees are now eschewing the high salaries and Big Tech dreams.

And employee activism is rising: An increasing number of employees in the sector are protesting against the ugly side of Big Tech, the AP reports. Workers Amazon, Microsoft and Salesforce are mounting campaigns against industry ties to the US military and border security, while Google employees have protested against the company’s complicity with Chinese censorship.

Sawiris wants to get in on Egyptian mining: Naguib Sawiris told Reuters yesterday that the new Mineral Resources Act may persuade him to invest in Egypt’s gold and copper mining industries once the details of the legislation have been revealed. “We’re waiting for the details of the law. They issue a law and then the devil is in the details. Once this is done, we intend to look for gold and copper,” he said. El Sisi ratified the legislation last week.

We will apparently find out who will be taking the helm of the national football team today, according to Ahram Online. After several foreign coaches proved disappointing, the Egyptian Football Association is set on tapping an Egyptian for the top job, EFA interim head Amr El Ganaini said yesterday.