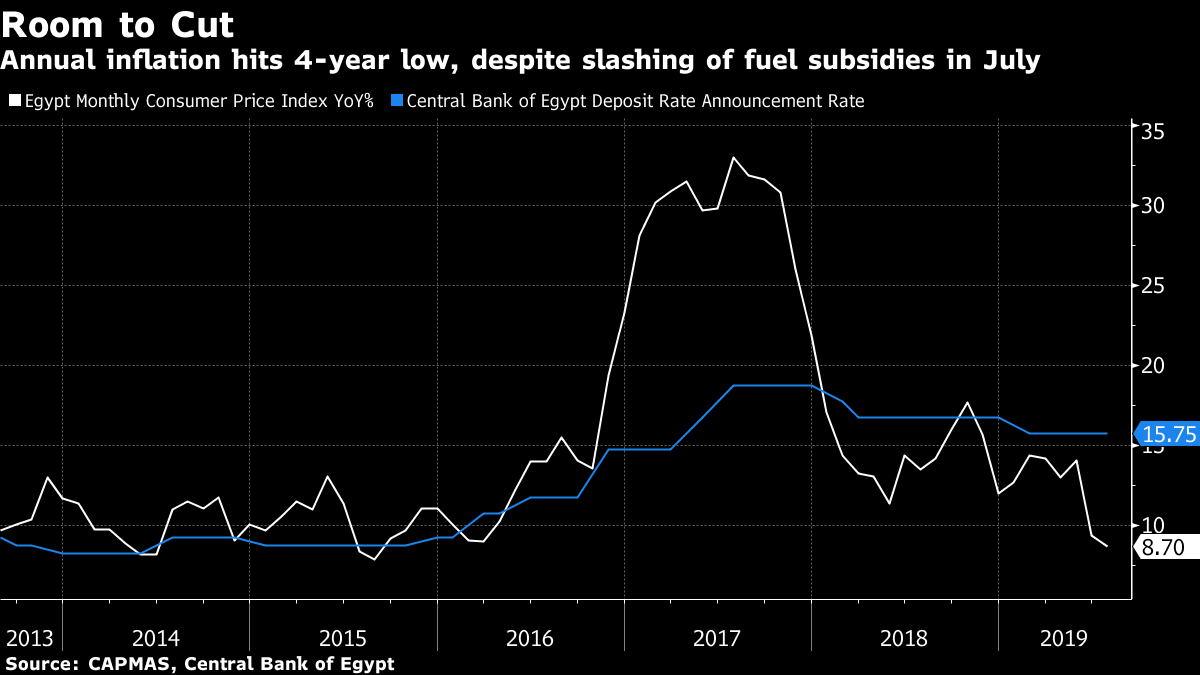 Headline inflation falls to four-year low in July despite subsidy cuts: Egypt’s annual headline inflation rate dropped to 8.7% in July from 9.4% in June, its lowest recording in four years, according to Capmas data released on Thursday. To put that into perspective: headline inflation was at 13.5% in July 2018, and at 33% in July 2017. To say that July’s inflation figures broke all expectations would be the understatement of the year, particularly as the government raised fuel prices between 16% and 30% in July and new electricity subsidy cuts coming into effect. Core inflation fell to 5.9% in July from 6.4% in June, according to the central bank (pdf). Bloomberg and Reuters also have the story.

The base effect is touted as the likely reason for the good fortune: A favorable base effect and carry on effect from the previous month’s single-digit inflation has been the most common reason given by analysts for the drop, including by Beltone Financial and Pharos Holding. “It seems that the energy price hikes may have had a smaller effect than many anticipated. But inflation in most other price categories eased too, suggesting that underlying price pressures are weakening,” said William Jackson, chief emerging markets economist at Capital Economics. “It seems government efforts to help the internal market limit food-price increases have been working,” said Angus Blair, chairman of business and economic forecasting think-tank Signet.

Will inflation remain in single digits for the rest of the year: “A favorable base effect and EGP strength will continue to advocate benign annual inflation readings till year end, keeping inflation rates within the CBE’s target zone,” Beltone said in a research note. “We note that domestic fuel prices will be subject to a review by the end of September 2019, where we believe prices will remain unchanged on the back of the strength in the EGP coupled with the low currently oil prices,” they added. Pharos expects inflation to remain in the single digits all through 2019, ending the year with an average of 9.4%.

All this is raising hope for an interest rate cut this month: The drop in July’s inflation has raised hopes that the CBE’s Monetary Policy Committee will cut interest rates for the first time in six months, when it meets on Thursday, 22 August. “It’s great news for the markets because it reinforces hopes of interest rate cuts in August. I think the central bank now has enough room to restart its monetary easing policy going forward,” Naeem Holdings’ Allen Sandeep tells Reuters. “We believe the CBE might cut rates in its upcoming meeting later this month, which will also largely depend on global and emerging market conditions,” said HC’s Sara Saada. Beltone Financial expects the CBE to cut interest rates by 100 bps this month.

Reminder: Capex borrowing won’t pick up until interest rates drop. Our survey of nine companies across several industries found that businesses are waiting for interest rates to fall within pre-float levels of 10-13% before ramping up capex borrowing. The central bank’s overnight deposit and lending rates have remained unchanged at 15.75% and 16.75% since February.