Al Mashat in the US, talks tourism reform, promotion: Tourism Minister Rania Al Mashat met this week with International Monetary Fund (IMF) executives in the US to discuss structural reforms currently being implemented in Egypt’s tourism sector, the ministry said in a statement (pdf) without providing further details. Al Mashat also separately discussed the preparation of videos and photos for the ministry’s tourism promotion campaign with well-known social media influencer and founder of Beautiful Destinations, Jeremy Johnson, reports Ahram Online. The ministry signed a protocol with Johnson’s company last March on the sidelines of the ITB Berlin tourism expo.

Will the Export Subsidy Fund decide on the new export subsidies framework this week? The board of the Export Subsidy Fund will meet today to discuss the new framework through which it will disburse some EGP 6 bn annually in export subsidies, Youm7 reports. The meeting comes as the government looks to transition export subsidies payments from a cash-based program to an incentive-based program. The finance and trade ministries held meetings last month to discuss allowing exporters to net overdue subsidies off against their taxes. The move comes as part of the government’s effort to make good on what is claimed to be some EGP 12 bn owed to Egyptian exporters by the Export Subsidy Fund since last year. Government sources tell the newspaper that the meeting will see a decision on the framework.

The government is planning to send the Social Welfare Act to the House of Representatives this week so that it can be voted on during the current parliamentary session, sources from the Social Solidarity Ministry told the local press.

SWF boss to be announced by September: We could find out who will be helming our EGP 200 bn sovereign wealth fund by September, by which time the fund’s board of directors will have interviewed the four candidates on the final shortlist, Planning Minister Hala El Said tells Hapi Journal. The minister gave no details on who made the short list. 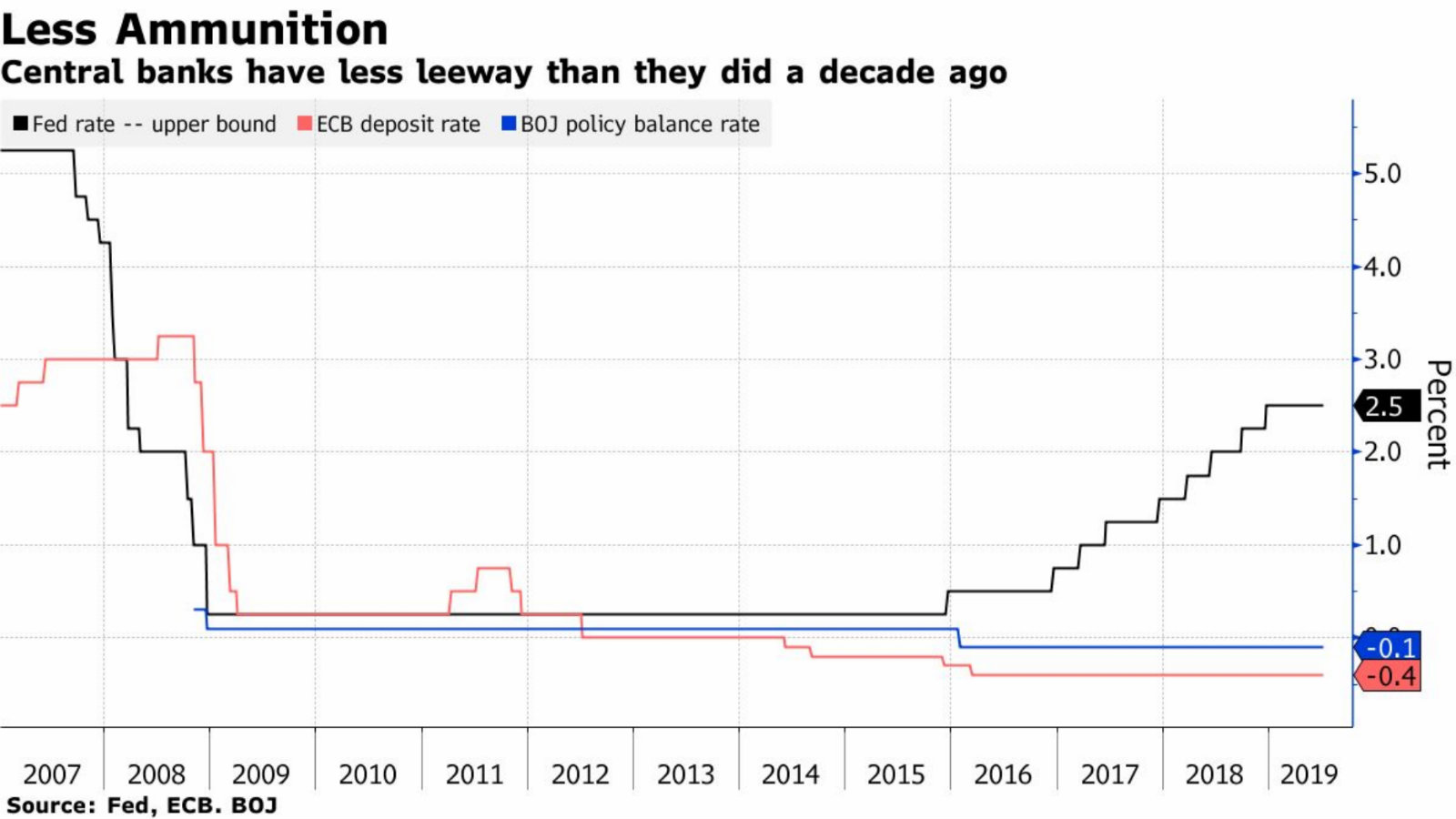 Fed easing to “disappoint” markets -Wells Fargo: The US Federal Reserve will not meet market expectations for 65-70 bps-worth of rate cuts this year, Michael Schumacher, global head of rate strategy at Wells Fargo Securities, told CNBC (watch, runtime: 06:46). Wells Fargo is predicting that the central bank will make two cuts totaling 50bps before the end of the year.

Central banks are running out of ammo: Whether it cuts rates by 50 bps or 75 bps, the Fed along with the world’s other systemic central banks are running low on policy tools with which to fight the next economic downturn, Enda Curran writes in Bloomberg. Economic expansion and inflation remain muted, despite the negative rates at the Bank of Japan and the European Central Bank, and the 2.5% Fed rate, which is historically low for this stage of the economic cycle. And what leeway central banks do have to cut rates further will not necessarily help to counter the damaging effects of the trade war or boost inflation. “There are limits on what further monetary easing can achieve,” Australian central bank Governor Philip Lowe said last month. “You still get benefit from it, but there are limits.”

Is Deutsche Bank’s substantial downsizing a sign of what’s to come? An “automation revolution” is squeezing out inefficient or underperforming institutions, says the Financial Times, with investment banks the world over now fighting for their market share of dwindling revenues. Machine-reliant high-speed traders like XTX Markets are taking up an increasing share (currently 12%) of the European stock-trading market. And where equities are heading, other markets are following: Electronic trading handled 28% of the total volume in the US corporate bond market in May this year, compared to just under a fifth in 1Q2018.

The Trump administration is preparing to slap Turkey with fresh sanctions after Ankara began receiving parts of a Russian missile system, people familiar with the matter said, according to Bloomberg. The sanctions could be announced in the coming days, but the US administration wants to wait until after Monday’s third anniversary of the 2016 attempted coup against Erdogan to avoid feeding into conspiracy theories that the US was responsible.