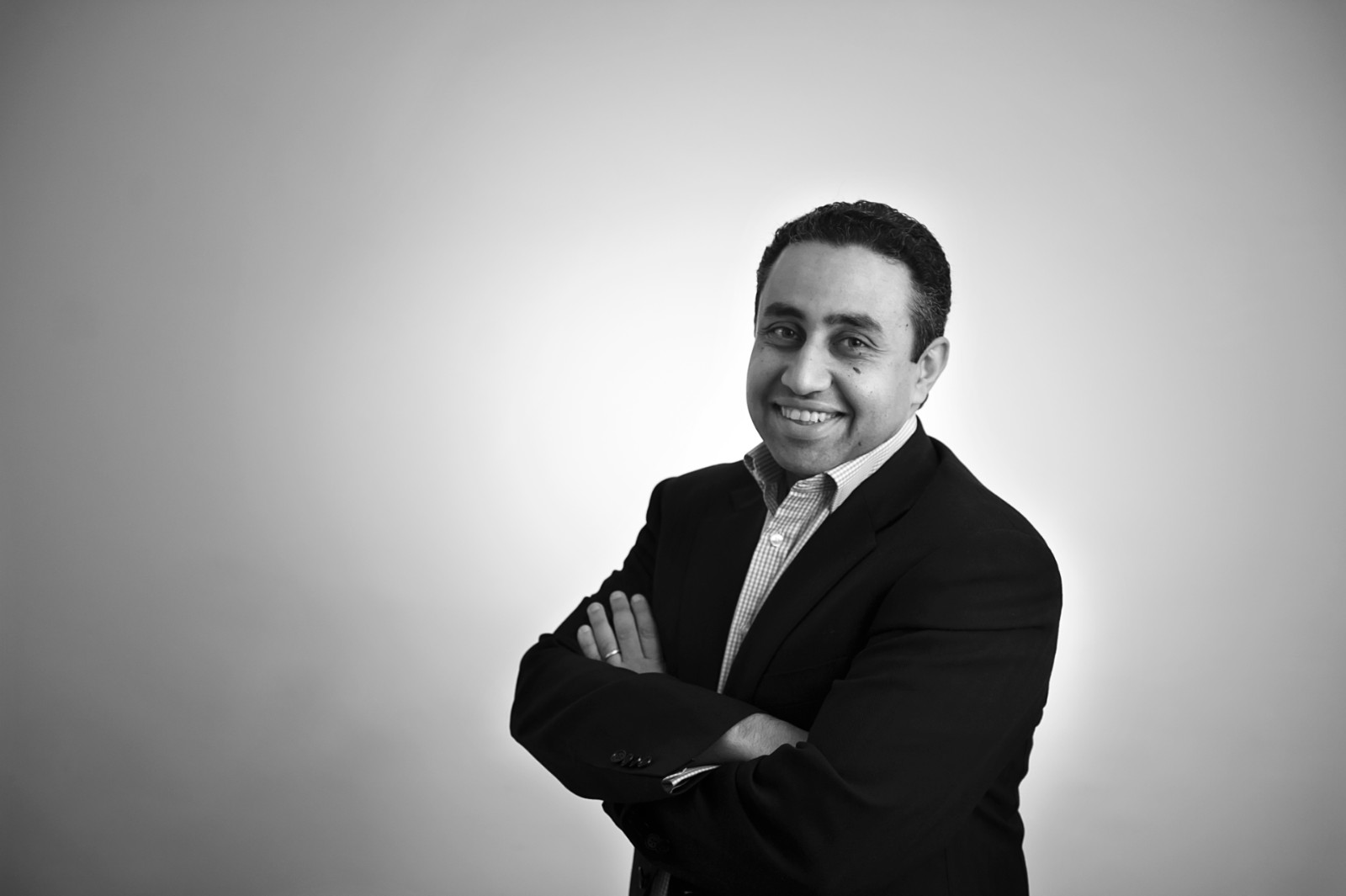 My Morning Routine looks each week at how a successful member of the community starts their day — and then throws in a couple of random business questions just for fun. Speaking to us this week is Hany Al Sonbaty (LinkedIn), managing partner of Sawari Ventures, a venture capital firm that invests in North African entrepreneurs.

My name is Hany Al Sonbaty. I’m 46 years old and getting greyer (and presumably wiser) by the day. I’m the husband to Dalia Elsokari and father of the theatrical Noor (13) and the resourceful Yousef (9).

I’m privileged to be one of the founders and the managing partner of Sawari Ventures, a venture capital fund-management firm focused on investing in Egyptian and North African early stage companies. We typically invest anywhere between USD 1-3 mn in fast-growing, knowledge-based companies. Beyond the numbers, our ultimate aim is to find the best entrepreneurs, with the desire and capability to build great companies.

My morning routine depends on whether my wife is out running or not, as we alternate in taking responsibility for getting the kids ready for school. Noor is usually up by 6am and gets herself ready, but Yousef requires a monumental “shove” to get out of bed. By 7:40am, the kids are out the door and my wife and I get ready for work. I drop her off, make a short coffee-run detour and head to Sawari. It’s a routine born out of ‘necessity,’ but one of which I have become increasingly fond.

There really isn’t a ‘typical’ day within our line of work. The only “set-in stone” calendar item is a company-wide meeting on Sunday mornings from 11am-1 pm, commonly referred to as the “partners’ meeting.” This usually sets the agenda for the rest of the week. All aspects of the partnership are discussed during this two hour period: the investment agreement pipeline, agreement execution, key portfolio updates, staffing etc.

On any given day, our time is usually split between taking pitch idea meetings, executing agreements (analysis, due diligence, documentation), managing our portfolio of investments and engaging with our investor base and the ecosystem at large. Time allocation varies greatly based on where we are in the fund cycle and with specific events like closing a transaction or preparing for an exit. Portfolio management is the biggest part (timewise) of the job. How best to add value to the companies that we invest in is at the heart of our business, so often we are heavily involved in business development, strategy formulation and implementation, board representation and instilling good governance. We strive to do whatever it takes to help the entrepreneurs succeed.

As a sci-fi fan growing up in the 80s, Star Wars and comic books were a huge part of my childhood. So the new Star Wars trilogy and the entire Marvel Cinematic Universe have a very special emotional resonance with me. Artistically, Infinity War and Endgame did not disappoint. At the same time, Star Wars will always be special — no matter what.

For me, Seinfeld is the best tv-show ever made. The writing is timeless and the scripts are tight. But TV has changed dramatically over my lifetime, and it’s been almost entirely driven by technology. So I also give special mention to two shows made possible by this transformation: The Man in the High Castle and Insecure, which both started off as webisodes on YouTube.

Sawari Ventures is a partnership between Ahmed Alfi, Wael Amin, and me. We all crossed paths during our individual careers.

Prior to founding Sawari, I was in charge of technology, media and telecom investments at EFG-Hermes. Between 1999 and 2009 we invested in over 30 companies (including Masrawy, Otlob, LinkdotNet, and Maktoob) and launched the first venture capital FRA-regulated funds in Egypt, which invested in Si-ware and were among the founding investors in Fawry. I first met Wael nearly 20 years ago, when we invested in his company, ITWorx. Alfi I met later, in 2005. He was an avid techie and tech investor in the US, looking to relocate back to Egypt after 40 years and searching for opportunities here and the region. Seeing Egypt’s immense potential, Alfi relocated in 2006 and was briefly my boss at EFG-Hermes.

Alfi and I joined forces in 2010 to launch Sawari Ventures. Our efforts to raise a dedicated venture capital fund were slowed down by the political and economic situation in Egypt, but we believed in the future and invested our own capital in companies like Kngine (sold to Samsung) and Elves. We also created Flat6Labs, which went on to expand to Saudi Arabia, UAE, Lebanon, Tunisia and Bahrain.

Even before Wael became a partner in Sawari Ventures, he was always there with us. He was one of our portfolio companies’ most dedicated mentors and the go-to person for technology and operational issues. On his 20th anniversary of founding ITWorx, a 1k-strong, USD 50 mn company whose alumni have gone on to start over 150 companies, Wael decided to join us officially.

My partners and I all share a passion for entrepreneurship and believe in its immense power to positively transform economies.

Institutional VC is still nascent in the region, and the ecosystem on the whole is on an accelerated learning curve. Perceptions and realities (i.e. ‘rules of the game’ and ‘best practice’) amongst the participants themselves are still not fully aligned or appreciated.

One persistent underappreciated truism is the critical role of personalities in influencing outcomes. Business 101 teaches you that people create value, but most individuals I’ve met just pay lip service to this mantra. In no other industry do people matter more or is their effect as obvious and easily traceable as VC. It’s about the people first, second and third.

The other generally misunderstood issue is the nature of the relationship between the entrepreneur and the venture capitalist. It is a unique (and quite unsettling for the uninitiated) blend of personal and business. On average we hold our investments for five years before we exit. That's a very long time in relationship terms. Like any relationship, you will get out of it (and your investment) what you put in, so align interests and expectations upfront, build trust and don’t make it transactional in nature if you want to see it flourish.

The entire entrepreneurial ecosystem in Egypt and the region is woefully undercapitalized. This is not just in terms of the available funding but also the depth of the investor base itself at various stages of a company’s life (seed, early stage, growth and more growth).

But this is changing at a much faster pace than I had imagined just three or four years ago. Given that a substantial portion of the GDP (healthcare, transport, banking, education, agriculture) will one day be digitized in one form or another, a substantial number of new companies created will be entrepreneur-led. I personally expect that the capital available for VC will increase by close to two orders of magnitude within our lifetime and this will transform our economy beyond the perceived macro constraints.

There are four realizations that have helped me along in business through thick and thin. First: There is no single path to success. As a former boss once told me in his heavy French accent, “Hanneee! You can be an angel or the prince of darkness and still succeed. ” Second: There are no solutions, only trade-offs. Third: Kobayashi Maru: Alfi and I agree on many issues but are diametrically opposed on one: Star Trek vs. Star Wars. Sometimes, he brings up Kobayashi Maru, a fictional training simulation for Star Trek cadets, which is a no-win situation where everyone dies. The moral I take from this is that in a seemingly no-win situation, you have to change your narrative and perspective. Fourth: The sun’ll come out, tomorrow.