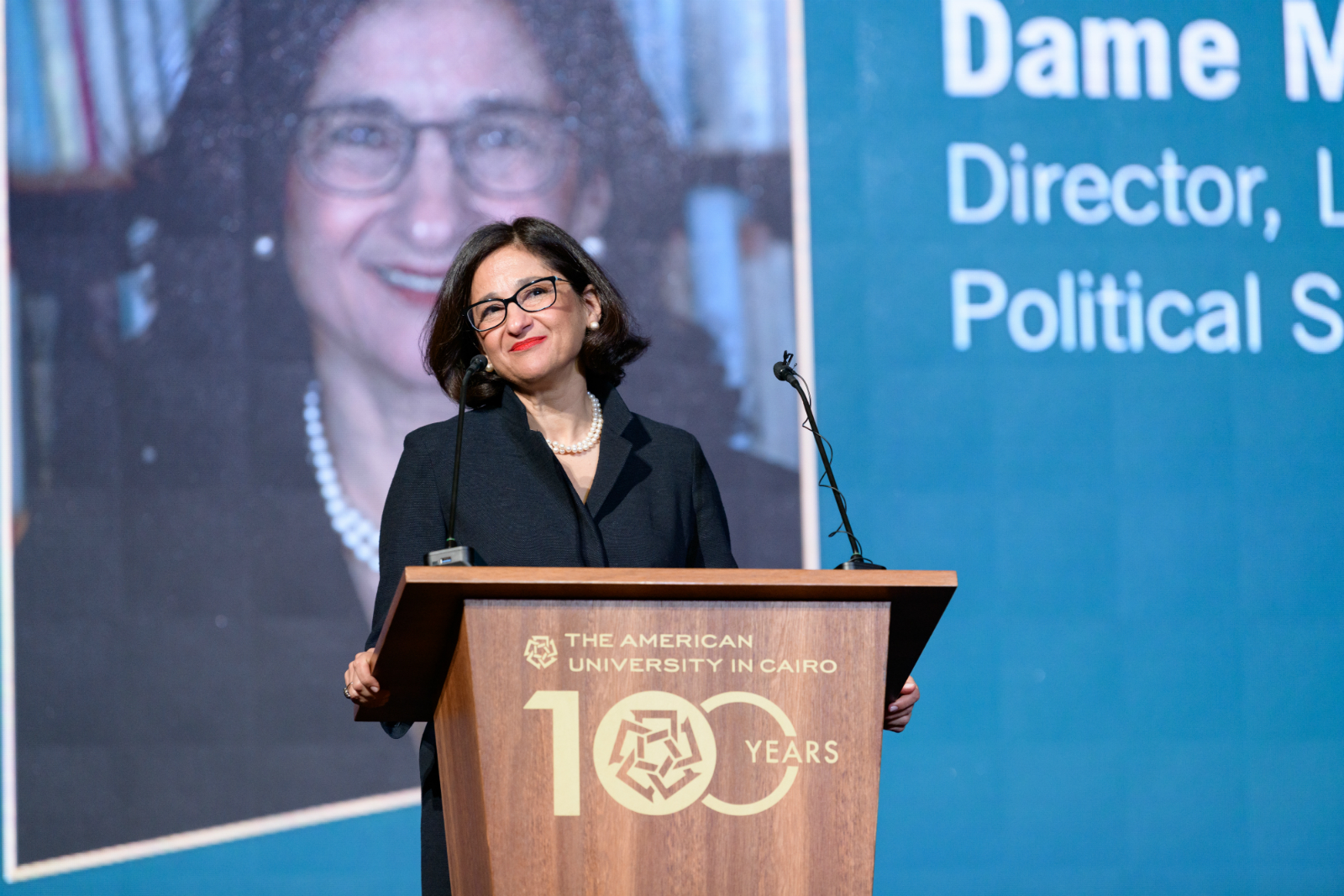 EXCLUSIVE- Our sit-down with Dame Nemat “Minouche” Shafik: Dame Nemat “Minouche” Shafik — director of the London School of Economics and one of the global rock stars of economics (official bio) — was at the American University in Cairo last Wednesday to give the Nadia Younes Memorial Lecture. And if you are an economics nerd living in Cairo and missed it, you must feel like a Red Hot Chilli Peppers fan who just couldn’t make it to the Pyramids a couple of weeks ago. Her talk explored some of the fundamental concepts that impact societal and economic growth, including social mobility, education, the role of women in the workplace, and technology. We sat down with Dame Minouche after lecture for a quick chat courtesy our friends at AUC.

And now without further ado, we give you our exclusive sit-down with Dame Minouche.

Enterprise: On the state of the future of economic development, how far have emerging markets come towards tackling issues such as climate change, income inequality, and gender parity? Are emerging markets doing enough to address these?

Nemat Shafik: I think emerging markets have come a huge way over the decades and that’s clear. There are a set of new challenges around tech change that will raise a new set of challenges. I think the traditional transition through manufacturing as the way to grow and go from a low middle-income country to a middle-income country and then to an advanced economy will alter because of automation and technology. Countries will have to think about ways to leap frog or to do things differently. Also, a lot of manufacturing is likely to return to advanced economies, because it’s really about capital now and not labor costs. And I think EMs and developing economies will have to find their niches in this new set up.

There are some big opportunities and I think the export of services has now become possible in a way we couldn’t have imagined before. So countries like India have built a market capability on exporting computer technology. Even things like architectural services now. You can have an architect mns of miles away design your house for you. So I think you can create opportunities, but that is a different development strategy than it used to be.

E: Are countries prepared for changes including automation and robotics? Are they moving in the right direction?

NS: I think this varies hugely by country. Some countries are beginning to think about the path to the future, while others are still operating on the old model and thinking that traditional manufacturing is the way to go.

Technology both displaces jobs but it also creates jobs. I am not a techno-pessimist. I don't think we’ll all be put out of work. I think new jobs will emerge and the question will be, which countries will create an environment for these new jobs to flourish.

I think competition is hugely important. If you have lots of state-owned enterprises or monopolistic firms, they will thwart innovation and will thwart those new jobs emerging. So I would be very wary of that. And I think creating a level playing field is important for those technologies that exist now so they face competition themselves (just like the debate you’re seeing globally on antitrust and Facebook and Google). If we don’t create real competition, the impact of automation will be job-reducing, while if we allow competition we’ll get a lot of job creation as a result of technology.

E: What trends in technology do you see having the biggest impact on the global economy?

NS: I think Big Data is changing everything, from services, to marketing, to medicine. I think there’s a huge opportunity there. Also, machine learning.

E: Of the myriad issues facing the global economy today, such as Brexit, the US-China trade war, income inequality, rising trade barriers, etc, which do you see is the most pressing for emerging markets and globally?

NS: From a global prosperity perspective in the near term, I think the biggest issue is finding a new agreed set of international trade rules that would create a level playing field, including for China. A trade war would be hugely damaging for the global economy. I think there is a solution where China needs to open up some of its domestic markets, and no longer rely on the fact that it is classified as a developing economy under World Trade Organization rules. And I think it also requires that countries back down from the recent tariffs imposed on China. I think there is [an agreement] to be struck, but I think the question is whether the negotiators are wise enough to find that path. I think in the near term that is the biggest issue.

I should also say that in the medium longer term, climate change will have huge economic consequences, and we’re already seeing it. I think for the first time people in their daily lives are seeing the costs of serious weather changes (eg. rationing water, the damage in infrastructure by shocks from weather). It is one of those issues where there is a shift in public mood and a willingness to tackle the issue. And I think even though it feels like a distant future, we’re feeling the consequences now and I hope that will galvanize leaders to act.

E: What are the most interesting trends you are seeing now in global investment?

NS: The two big new drivers are tech and climate. And there are lots of innovative new responses to climate, be it innovative energy or building materials that are more climate friendly, including innovative food production systems that are less environmentally damaging and are carbon-reducing. So I think those phenomena of digital and green are cutting across everything from food, to medicine, to education.

E: There is a debate in Egypt now on including the informal economy into GDP. Do you think that is sound policy?

NS: There have been attempts in the past by many countries to try and estimate the size of the informal economy, but the problem is that by definition it is informal, it is hard to measure. So the reliability of the data is just very poor. I think what I would focus my attention on is reducing informality itself. Why are all these firms informal? Why don’t they come into the formal system? What are the obstacles and how can you increase formalization? Informality is bad for productivity. These firms can’t get access to credit, they don’t participate in the social safety net, and there is probably some very clear policy reasons why they stay informal and tackling that is much more useful.

E: How do you see the role of multilateral organizations such as the IMF and World Bank in this turbulent economic climate? Should they reassess their standard economic medicine?

NS: I do think they need constant renewal of their intellectual framework. And as the economy changes, and as we have these very big new trends like digital, we need to adjust how we think about things and I think that’s a constant process.

The other issue that’s particularly problematic at the moment is the governance of those institutions and how can they modernize their governance to maintain a global consensus. And at the moment when you have the US and China at loggerheads, it’s very hard to have an effective international system. And I am a huge believer in the importance of those institutions for keeping the world economy stable and prosperous, so i think we need to tackle that issue of governance squarely.

E: What challenges did you face as a woman and as an Egyptian rising to the apex of the economic world?

NS: I’m sure I faced the same challenges that many working women faced. Everybody (especially when you’re younger) has issues with being listened to, having their views taken on board, when your male colleagues get more of a hearing that you do. I faced all these things. I really do think things are changing, and I think that’s because there are so many capable young women now. And they’re so much more aware of their rights, what they can do and what their capabilities are. And their expectations are different. I think the policies in the workplace have not caught up with their expectations and the support systems they need like having access to good childcare and maternity leave so they can have families and still be employees, that needs to catch up with their ambitions and expectations. But I think this generation of younger women will demand that change and I really do believe we are on the cusp of a major transformation in terms of women’s economic and political roles, and so I'm really excited to see what they do.