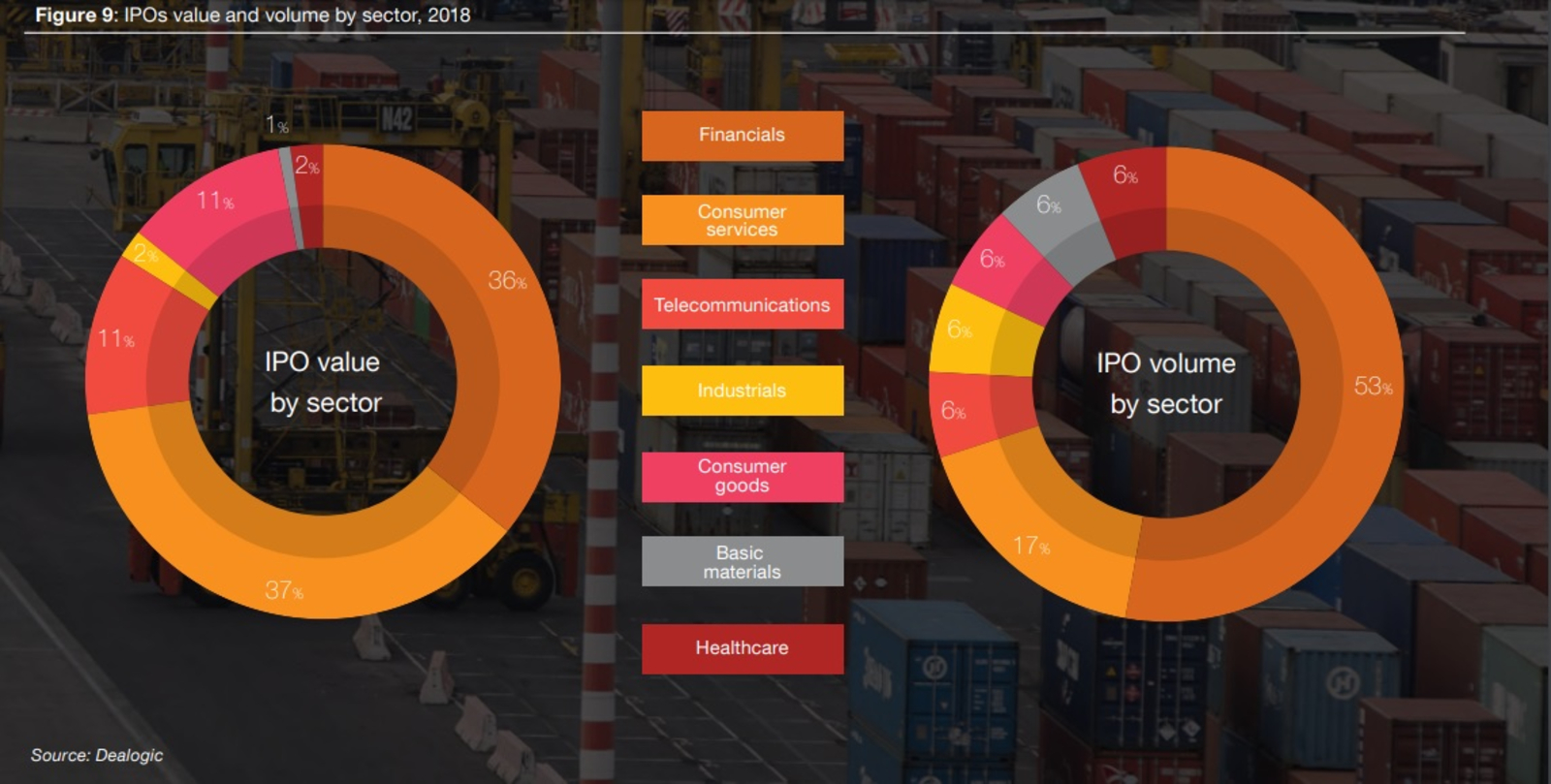 IPO WATCH- IPO activity in Egypt and the rest of North Africa rose 115% in 2018, but 2019 looks like it’s going to be a bit slower -PwC: IPO activity was up 115% y-o-y last year in value terms in Egypt, Morocco, Tunisia, and Algeria, according to PwC’s annual Capital Markets Watch report (pdf). The jump was driven primarily by “renewed IPO activity on the Casablanca Stock Exchange and a near doubling in value of IPO proceeds on the EGX compared to the prior year,” the report says. The four IPOs on the EGX last year raised USD 315 mn, compared to USD 179 mn raised through four IPOs in 2017. Over the course of 2014-2018, the Johannesburg Stock Exchange (JSE) has accounted for the lion’s share of IPO activity and value in Africa’s capital markets with USD 5.9 bn raised over 43 transactions. The EGX is a distant second “with 17 issuances accounting for USD 1.6 bn.”

Sarwa Capital (IPO) and Orange Egypt (delisting) were also among the top five equity capital market (ECM) transactions in Africa last year, the report says. Other high-value transactions that went to market in Africa last year include the IPOs of UK-based Vivo Energy plc on the JSE and Ghana-based Scancom plc-MTN on the Ghana Stock Exchange, as well as the secondary offering of South Africa’s Sanlam and Nigeria’s Lafarge.

(Oh, and Orange may re-list — we have more on that below.)

On the whole, ECM lost steam as 2018 ground on — and it’s not looking like this year will be much different. Although several “landmark” IPOs and secondary offerings went to the market at the beginning of 2018 to start the year on a good note, the momentum “deteriorated throughout the year due to various factors, including the increase in US treasury yields, the continued global trade dispute between the US and China, and local economic challenges.” In other words, the EM Zombie Apocalypse took a bite out of the market.

PwC expects subdued activity in 2019 “despite the pipeline of announced and expected local and cross-border listings.”

Egypt’s IPO pipeline for 2019 includes three unnamed private companies so far, EGX boss Mohamed Farid said yesterday, according to Reuters. The three companies are “working on finalising their prospectuses [and] finalising the issue requirements,” with at least one of the three expecting to list by mid-2019, Farid said. All three transactions should go to market by the end of the year. Two of the companies’ combined market value is around EGP 14 bn, while the third has not yet conducted a valuation report.