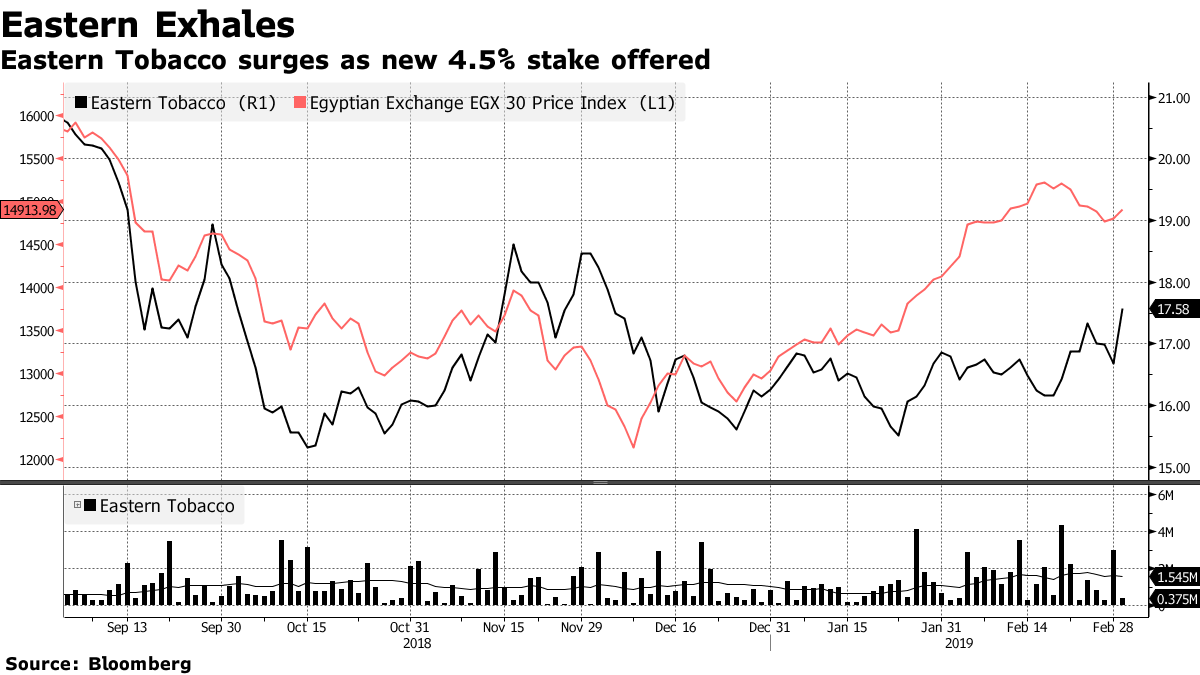 EXCLUSIVE- Next wave in state privatization program will be IPOs, set to begin in September: The next wave of state-owned companies selling shares as part of the state privatization program will be new listings, Public Enterprises Minister Hisham Tawfik told Enterprise yesterday. The state plans to begin listing four or five companies in September, at a rate of about one IPO per month. The government will announce an updated list of the companies on the roster within a week or two as it chooses from eight shortlisted companies. Tawfik said that the priority is for companies in the industrial, mining, and E&P sectors beside Enppi. He added that it isn’t confirmed yet if Banque du Caire will be part of the second phase.

For now, secondary offerings will keep rolling until Ramadan: After closing the public offering portion of Eastern Tobacco on Tuesday, the government plans to sell shares in Alexandria Containers & Cargo Handling, followed by Abou Kir Fertilizers and Heliopolis Housing, and then pause for the slow Ramadan and summer season. The second phase in September may involve another secondary offering, according to Tawfik. The government plans to offer about 20% of Alexandria Containers and is expected to raise up to EGP 8 bn in sale proceeds, Tawfik told Al Mal. His statement comes after the sudden announcement on Friday kicking off the privatization program with the sale of an additional 4.5% stake in Eastern Company.

Eastern Tobacco institutional offering ropes in foreign investors: Eastern Tobacco’s institutional offering of a 4.275% stake (equivalent to 96,187,500 shares) was 1.8x oversubscribed, with shares offered at EGP 17 apiece. 94% of the subscribers in the private placement were non-Egyptians, 70% of them were foreigners and 30% Arabs, according to Al Mal. A total of 829,849 shares were covered on Sunday, bringing total coverage on the first day of the public offering to about 16%, according to a seperate report from the newspaper.

The FRA is taking no chances this time: The Financial Regulatory Authority (FRA) has asked EFG Hermes, which advised on the transaction, to hand the bookbuilding order log before announcing the subscription rate and the final price, Al Mal reported. The authority also asked EFG to double-check the financial capability of clients and their ability to pay for the stocks requested, and also excluded orders that were given without a price. The move follows last year’s mishap with the IPO of structured- and consumer-finance firm Sarwa Capital that led to the FRA suspending Beltone Financial’s investment banking arm. The suspension was lifted last month following a EGP 16 mn settlement.

Shares in Eastern Company rose 4.4% to EGP 17.4 / share yesterday. The stock rose earlier in the session as much as 5.9% to its highest level in three months, Bloomberg reported. The news information service says that the share sale helped extend The EGX30’s New Year rally — the bourse’s best since 2014.