The Central Bank of Egypt cut its key interest rates by 100 bps on Thursday in a move that surprised pundits: Nine of 11 economists surveyed in our Enterprise poll ahead of the meeting had suggested that the MPC would leave the rates on hold. The central bank cited lower inflation and unemployment, higher growth rates and slower global tightening.

Where do rates stand this morning? The CBE’s overnight deposit and lending rates stand at 15.75% and 16.75%, respectively. The bank also cut its main operation and discount rates to 16.25%, the CBE said in a statement (pdf).

The “well-justified” rate cut “illustrates the CBE’s confidence in Egypt’s economic outlook, despite global headwinds,” said CI Capital’s Hany Farahat, who called the rate cut. “The decision capitalizes on improving FX, capital flows, and inflation dynamics, and bodes well with our favorable balance of payments during 2019. We believe taking this step, days following the IMF’s disbursement of the fifth USD 2 bn loan tranche, signals the fund’s endorsement of an expansionary policy ahead.”

So why did the central bank cut rates? Read on:

Inflation within target range: Egypt’s annual headline urban inflation rate increased slightly to 12.7% in January compared to 12% the previous month, while annual core inflation went up to 8.6% from 8.3%, remaining within the CBE’s target inflation range of 13% (±3%), the CBE said, adding that it’s targeting a rate of 9% (±3%) for 4Q2020. Core inflation strips out volatile items such as food and fuel.

Slower global tightening and stable oil prices: The CBE also cited slower global growth, slower tightening of monetary policy globally as well as stable oil prices as factors that affected its decision on Thursday. “The expansion of global economic activity weakened, and the tightening of financial conditions eased, while trade tensions continued to weigh on the global outlook. International oil prices recently stabilized, yet remain subject to volatility due to potential supply-side factors,” the CBE said.

Business thinks it’s a good start — but only a start: “This is a good start and gives a good signal on the investment environment in Egypt, but we want more cuts and we hope the currency won’t weaken again because it will impact purchasing power and our business consequently,” Domty Vice Chairman Mohamed El Damaty told us. “We have already began expansion, but the rate cut helps us do more. Still, we are monitoring planned subsidy cuts this year and their impact on inflation, FX rates and whether further interest rate cuts are in the card. That will give us a clearer picture and help us set long-term plans.”

So, which stocks win? “It would bring down the cost of capital and this will be specifically positive for leveraged stocks such as Ezz Steel, GB Auto and Qalaa Holdings,” Allen Sandeep, head of research at Naeem Brokerage, told us. “It is also good news for consumers stocks like Juhayna, Obourland and Domty as spending will pick up. It’s neutral for the banks as treasury yields have dropped already by more than 1.5 percentage points, in anticipation of the rate cut, in our view.” Sandeep also believes that the cut will also draw us closer to the kickstart of state IPOs as the opportunity cost of capital drops. 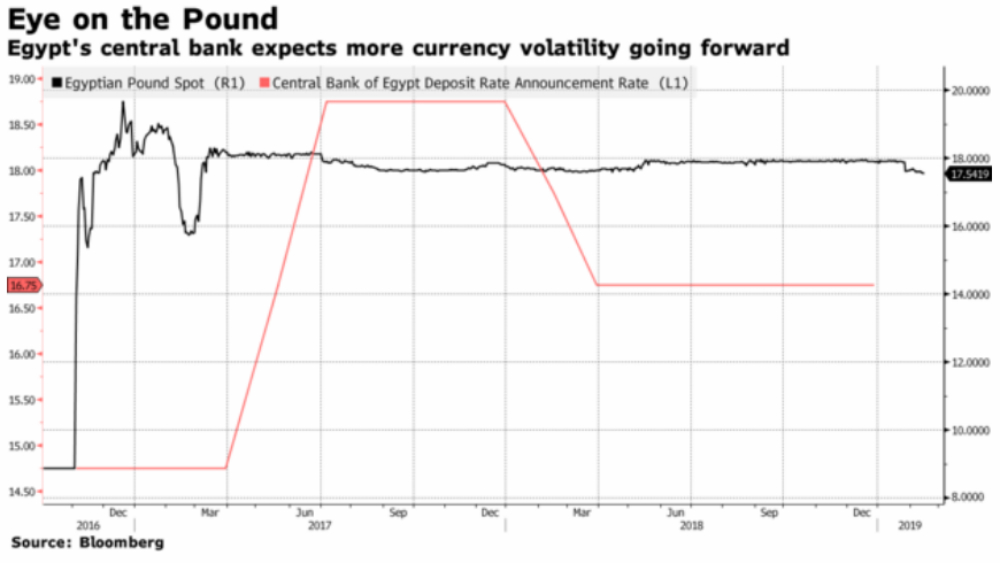 So what about the EGP? That appetite from the carry trade will help support the EGP, economist Reham El Desoki told Bloomberg. Added Beltone’s Mamdouh: “We reiterate our view of a limited downward pressure on the EGP in 2019 as investment recovery remains subdued.” The “waves of outflows” that Egypt experienced last year are unlikely, Mamdouh said, as “the attractive yields will continue to attract more foreigners.”

A more volatile EGP? Though it reflects growing investor confidence in Egypt, the shift toward the open market is also likely to expose the pound to more volatility, the business information service said. “A more volatile EGP could be an additional risk to the outlook,” Bloomberg writes. And while CBE Governor Tarek Amer said the CBE will stand ready against speculators, the Finance Ministry is predicting that the EGP will depreciate.