Regulator gave no reason for the suspension, which had immediate effect: The order, which gave no explanation for the suspension, instructed the EGX and Misr Central Clearing, Depository and Registry (MCDR) to “take all required procedures to implement the order.” The FRA also instructed Beltone’s brokerage arm to take on more insurance against potential client claims: The firm has one month to raise its insurance cover to EGP 50 mn and must maintain it at that level for a year. You can read a copy of the order here (pdf).

Beltone is cooperating with investigators, we’re told, but senior execs don’t know why the firm’s IB unit has been suspended: The firm said in an overnight statement (pdf) that it found the decisions “surprising” and noted that it had “yet to be informed of … reasons for their issuance.” Beltone, owned by Naguib Sawiris’ Orascom Investment Holding (OIH) is seeking an explanation and said it will “pursue the appropriate legal actions to safeguard its interests and those of its shareholders and clients.” The firm said the same thing to Reuters on Thursday.

Beltone’s brokerage arm is still trading: “The company also affirms that Beltone Securities Brokerage continues to conduct normal business operations, and that all of the group’s companies continue to operate in line with the aforementioned FRA decisions,” Beltone’s statement said.

Rumors are flying fast and furious on this one, and some of it really is the province of the Tin Foil Hat Brigade. We’re going to instead suggest we all start with some basic questions everyone should be asking this morning:

QUESTION #1: Is this related to the Sarwa IPO? Beltone ran last month’s IPO of consumer and structured finance firm Sarwa Capital, shares of which fell 11% in their EGX debut despite an institutional offering more than 10x oversubscribed and a retail component that was even more in demand. The FRA announced after the start of trading that a committee would look into the IPO. Some in the local press are drawing a connection between that probe and the suspension on Thursday of the IB unit.

QUESTION #2: Or was it triggered by a bid by Beltone’s parent company for c. 30% of Sarwa? The FRA ordered the suspension only one day after Beltone parent company OIH announced that it is looking to acquire a non-controlling stake of at least 25% in Sarwa Capital. OIH CEO Tamer El Mahdi told Bloomberg that “the company fundamentals are very strong, and we have no concerns in terms of the stock’s performance since the IPO.”

QUESTION #3: Did the regulator suspend Beltone because of Sarwa’s aftermarket share performance? It’s unlikely, we think: That would be exceptionally bad news for the market in general, to say nothing for companies heading to IPO in 2019 and the investment bankers advising them. It’s inconceivable that, absent fraud, a company or a bookrunner would be punished because a share flops after the start of trading.

To wit: It’s not unheard of for a company’s shares to fair poorly at IPO. Consider ADT Securities (down 12% in New York on their first day of trading this January in an IPO run by Morgan Stanley) or Facebook (down nearly 50% from its IPO price in the first three months of trading). ADT shares are still underwater, while Facebook are up nearly 300% since their 2012 debut.

Keep in mind: Sarwa went to market as the EM Zombie Apocalypse was biting Egypt particularly hard. The EGX30 tumbled nearly 26% between when Sarwa and Beltone first started pre-marking activities back in May and when the shares made their EGX debut on 15 October. The benchmark tumbled 11% during the IPO roadshow and then 6% between the announcement that Sarwa shares had been priced at EGP 7.36 (pdf) and the first day of trading.

Also: Gulf investors pulled back from Egypt on the same day as Sarwa’s EGX debut as investors had to meet margin calls following the cratering of the Tadawul in Saudi Arabia. The next day, even more oxygen left the market as investors piled into MNHD shares following the announcement that SODIC was seeking 51% of the real estate developer. The graph at the end of this story brings it to life.

(Is how an IPO is priced a mystery to you? Check out Investopedia, which runs you through the bookbuilding process used in most major global markets, including Egypt. It’s how Beltone priced Sarwa, and it’s the market standard used by others including EFG Hermes and CI Capital. In short: Investment bankers guide on a price range. Then, during a roadshow in which they get to grill company management, qualified institutional investors place orders for a certain number shares at their desired price. The investment bankers then decide, with the company, the price at which shares will make their trading debut — and which investors get how many shares. Retail investors are then offered the shares at the same price.)

QUESTION #4: Was the order book for Sarwa inflated? We’re told by a source close to the transaction that defaults on orders were within the “normal range” and the “magnitude was small in view of the size of the offering.” The source also claimed that “70% of the demand and coverage came from institutional and foreign investors.” Allocation of shares is at the sole discretion of the investment bankers and the company, and at allocation over 80% of shares “went to institutional and foreign investors,” our source says. “25% of the book was local institutions and 55% from foreign investors from the US, Europe, South Africa and the GCC.”

QUESTION #5: Did IPO money go missing? That’s one of the wilder rumors we’ve heard, and it really isn’t possible: Egypt’s delivery-versus-payment (DVP) mechanism effectively leaves no room for an investment bank to keep cash raised in an IPO and not hand over shares.

QUESTION #6: Will the regulator make clear this morning (or this week) why it suspended Beltone? It should, for the good of the market as a whole.

QUESTION #7: Will OIH push on with its offer for a big chunk of Sarwa, or will it pull back amid the uncertainty? If they’re not withdrawing the offer, the next step is to file paperwork.

QUESTION #8: How will the market react to all of this? The news hit on Thursday with only 30 minutes or so left in the trading session. 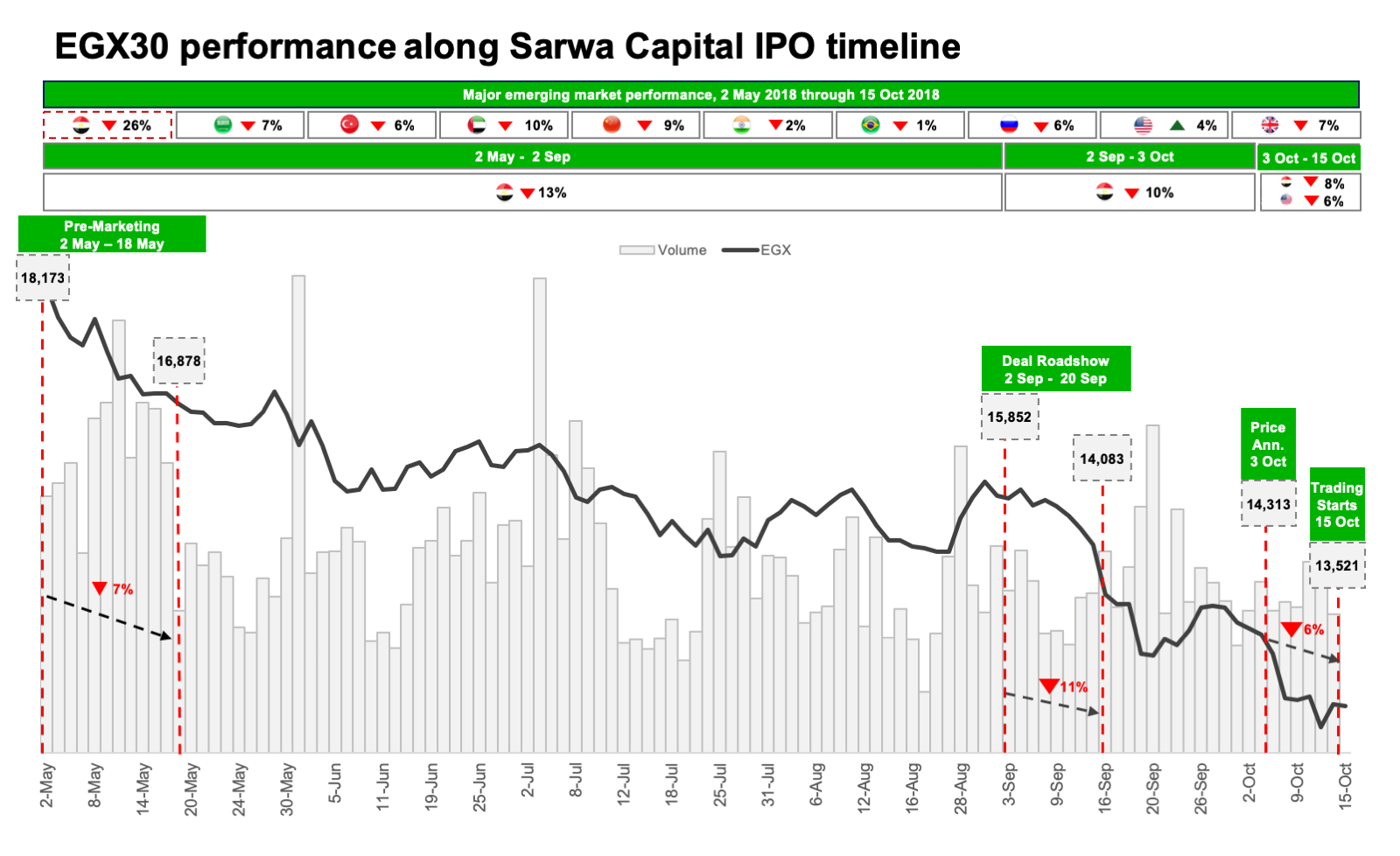