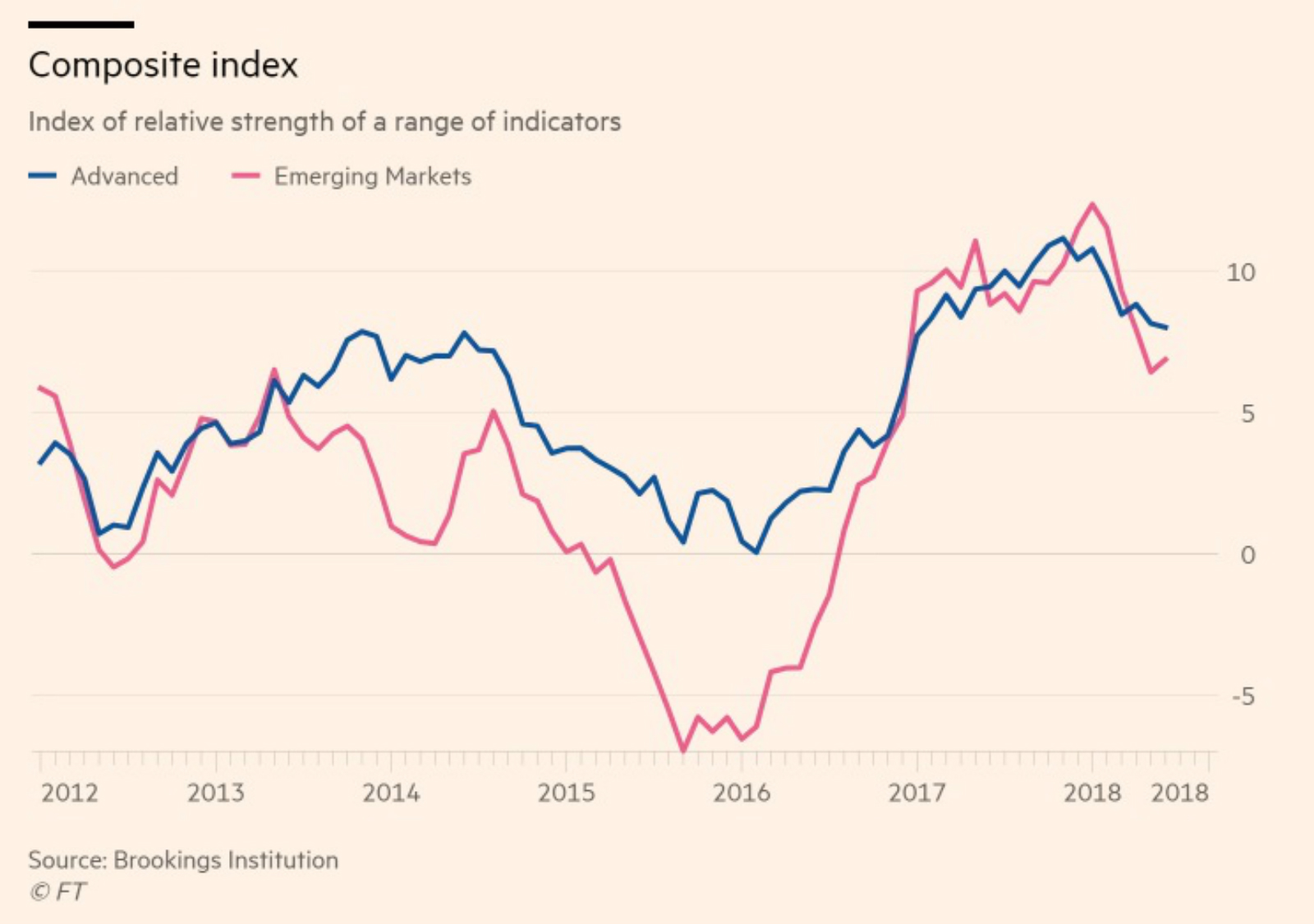 Growth momentum in most advanced economies has been strong enough to conceal the “fragility” of EMs and propel global growth figures, Chris Giles writes for the Financial Times. Most countries seem to have relatively healthy growth indicators, but a closer look tells us that EMs are lagging behind amid a drop in investor confidence. “With the US economy notable strong, pushing unemployment to its lowest level in almost 50 years, and other advanced economies still growing faster than long-term sustainable rates, the short-term concern in the global economy is centered in emerging economies. These have hit a rough patch … suffering from outflows of money, depreciations of their currency and therefore an increase in the burden of foreign currency denominated debt.”

What oil production cuts? Russia and Saudi Arabia have added around 1 mn bbl/d of crude since June, with pledges for greater room for further production. Saudi production jumped around 700k bbl/d to 10.7 mn bbl/day as of October, Saudi Energy Minister Khalid Al Falih said at Russian Energy Week. “I anticipate that November will be slightly higher,” he said, potentially breaking the production record set in November 2016, according to Bloomberg. Russia, which already broke its post-Soviet production record last month, could add another 300k bbl/d of supply within a “few months,” according to Russian Energy Minister Alexander Novak.

So why is oil still trading north of USD 80? Despite the production increases, brent crude was up to USD 85.20/bbl on Thursday. If you ask Russian President Vladimir Putin, the fault lies squarely with Donald Trump, whose push to end the Iran nuclear agreement and sanctions against Venezuela is behind the price rise: “Donald, if you want to find the culprit for the rise in prices, you need to look in the mirror,” said Putin. The ramp-up in production in Saudi, Bloomberg suggests, is enough to mitigate lower supply from Iran and Venezuela, but not to completely replace it.

Also worth a moment of your time this morning:

Saudi Aramco’s IPO is back on and will take place by 2021, Crown Prince Mohammed bin Salman told Bloomberg in an interview.

Schroders and Lloyds said yesterday they are mulling a wealth management “alliance” that Reuters says would be “among the biggest wealth management tie- ups in recent years and would come amid widespread consolidation in the broader industry sector.”

Did China hack Apple and Amazon with a chip the size of a grain of rice? That’s the contention in an epically reported piece by Bloomberg Businessweek that’s being vehemently denied by both companies. The US Department of Homeland Security is looking into the allegations.

A dissident Saudi journalist disappeared on a visit to his country’s consulate in Istanbul. Turkey claims Jamal Kashoggi, a longtime regime figure now writing from self-imposed exile, was executed inside the consulate by a Saudi hit squad. KSA denies the charges.

The head of Interpol disappeared on a visit to China. Turns out Meng Hongwei, the international police organziation’s president, is in the clink and under investigation on corruption charges. He has since resigned his post.

The Nobel Prize in the economic sciences will be announced today. The 2018 Sveriges Riksbank Prize in Economic Sciences in Memory of Alfred Nobel will be made public in a live-streamed ceremony late this morning. The prize caps an award season that saw Iraqi human rights activist Nadia Murad and Congolese surgeon Denis Mukwege jointly win this year’s peace prize on Friday for their campaigns to end [redacted] violence in war.

PSA #1- The fitness goals of the olds. Reddit, hardly known for its large over-40 crowd, featured an epic thread over the long weekend on how the olds among us are aiming to stay fit into their dotage. An inspiring must-read for anyone looking to get serious about health and fitness with the approach (or passage) of that 40th birthday.

PSA #2: Google will show off new hardware tomorrow at its fall launch event. We’re iSheep, but we like the Pixel lineup very much. The Verge and Tom’s Guide have the rundown on what you can expect. Also for non-Apple folk: The new Surface Pro 6 tablet looks particularly nice.

PSA #3- We’re heading into fall in the nation’s capital. Expect pleasant daytime highs of 29-31°C this week and next, with overnight lows of 19-22°C.