Taxify is beating Uber in Africa 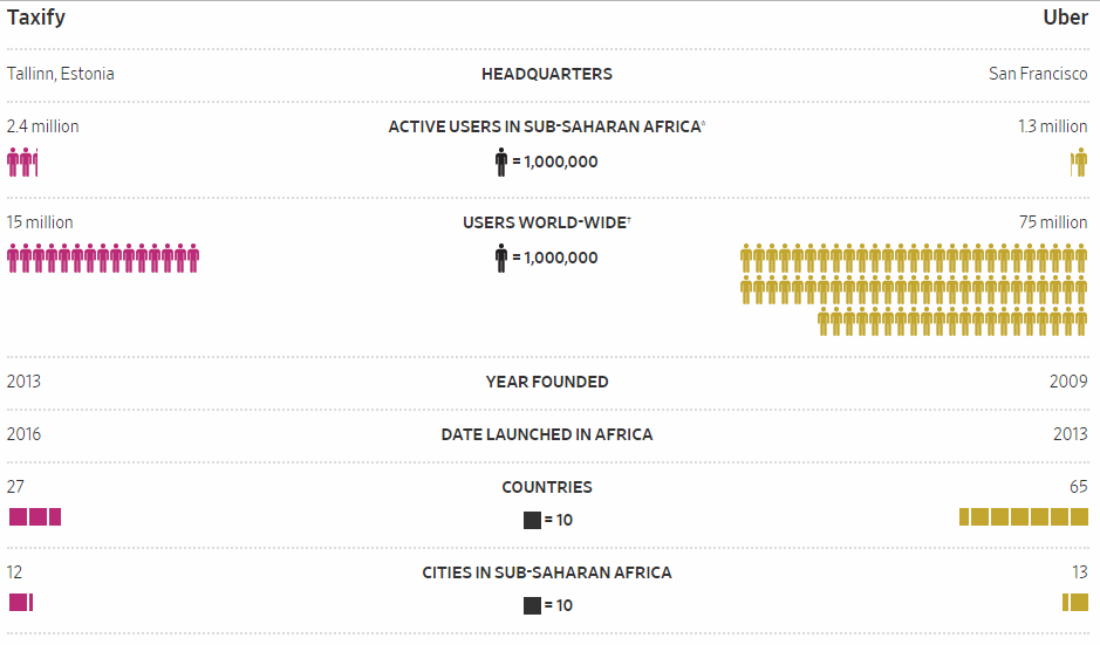 Why Taxify is beating Uber in Africa: It appears that ride-hailing giant Uber is being one upped by a smaller, Estonia-based competitor named Taxify, writes Alexandra Wexler for the Wall Street Journal. In just five years since its launch, Taxify has managed to take more active users (measured by the number of people who’ve used the app in the past month) in Africa than Uber. Taxify has 2.4 mn active users in Uganda, South Africa, Nigeria, Tanzania, Kenya and Ghana. Uber, which operates in these six countries in addition to Egypt and Morocco, is breaking 1.3 mn users.

In the emerging markets ride-hailing scene, nimbler is better: Taxify founder Markus Villig attributes this growth to the company’s ability to adapt quicker and faster to the needs of emerging markets. In Uganda, Taxify got a leg up on Uber by offering motorbike-hailing first. It took Uber two years to launch its motorbike service there. Taxify has also beat out Uber in offering mobile payments, which is very popular there. With low banking penetration, high unemployment, and poor access to vehicles, services such as these are more attractive.

Furthermore, Taxify takes 15% of a driver’s fare, while Uber charges 25%. “That makes a big difference in a country like Uganda where per-capita gross domestic product was just USD 604 last year.”

The trend is visible not just in Africa: Taxify’s success over Uber in Africa follows a familiar trend where the latter has been losing ground to smaller, and nimbler competition. Uber gave up territory to a number of smaller competitors in Asia in exchange for shares in them, including China’s Didi Chuxing Technology and Malaysia’s Grab.

Local player to watch: Halan, which targets the motorcycle and tuktuk market and was said earlier this year to be closing in on a USD 2 mn pre-Series ‘A’ round.