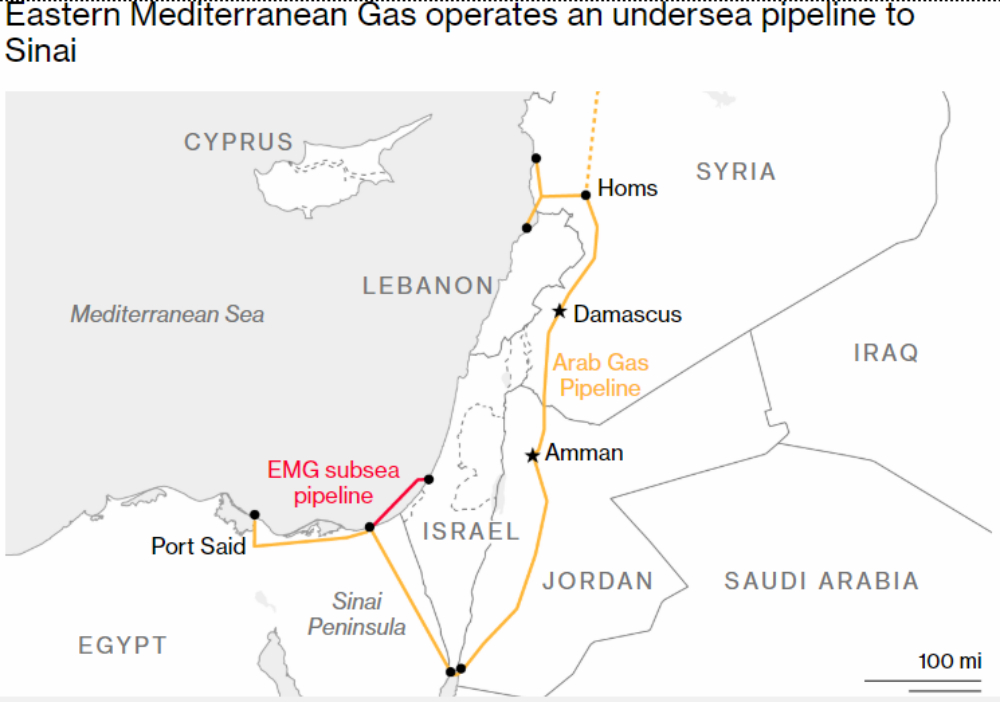 Go inside the web of private operators who are helping turn Egypt into the region’s premier energy hub: Operators of Israel’s Leviathan gas field are finalizing an agreement with their Egyptian partner that would bring Egypt closer to its goal of becoming the export hub for natural gas from the East Mediterranean. The agreement, which will come through setting up multiple offshore companies, will kill two birds with one stone: Securing a 10-year, USD 15 bn agreement signed in February with Alaa Arafa’s Dolphinus Holding to export gas from Tamar and Leviathan to Egypt early next year — and cutting and spacing out arbitration rulings that have long held up any gas import agreement between Egypt and Israel.

The transaction — enter East Gas: Israel’s Delek, Noble Energy (Delek’s Texas-based partner on the Leviathan gas field in Israel) and Egyptian partner East Gas will acquire a 37% stake in the East Mediterranean Gas Company (EMG). EMG is held by, among others, businessmen Sam Zell and Yosef Maiman, people familiar with the matter tell Bloomberg. Delek and Noble are in the process of setting up a Cyprus-based joint venture, which would then partner with a Netherlands-based company set up by East Gas. This new partnership, also based in Holland, would buy the 37% stake in EMG.

The transaction would give the partners ownership of EMG’s pipeline, which links Israel to Egypt. Under terms of the agreement, Delek, Noble and East Gas, will finalize technical due diligence on the pipeline after the initial buyout agreement is signed. They would then transfer the money to the EMG shareholders involved, sources said, adding that the agreement would go through regardless of the condition of the pipeline. The companies are planning to start gas imports from Israel in the beginning of next year.

It is not yet clear who owns East Gas — their website appears to have been under construction since 2016 — but we wouldn’t be surprised to see Dolphinus in there somewhere.

Clearing arbitration cases: The buyout by the two companies and their Egyptian partner in effect settles three of the four arbitration cases that had blocked the gas-import agreement, sources told Bloomberg. The Egyptian government has reached an agreement to reduce the USD 1.76 bn international arbitration ruling against EGAS, EGPC and East Mediterranean Gas (EMG) for failure to supply Israel Electric Corporation (IEC) with gas in 2012.

The fine would be reduced to around USD 470 mn and would be amortized over a period of around 15 years, according to two of the people directly involved in the talks. Negotiations are ongoing over which which bank would issue a letter of credit, they added. IEC wants “a top-tier international lender,” while Egypt is pushing for the National Bank of Egypt. Either way, any resolution to the case clears the largest hurdle between a gas import agreement between Israel and Egypt. For years, the Ismail cabinet had made resolving this case a condition for the agreement.

What about the other arbitration cases? Maiman and other shareholders of EMG had also won USD 1.03 bn in damages from the state in a Cairo arbitration court back in February.The sources did not make clear how this case fators into the agreement. Also unclear so far is how the new partnership resolves a USD 270 mn arbitration case with Spanish Egyptian Gas Company (SEGAS), which runs the Damietta liquefaction plant and is 80% owned by Spain’s Union Fenosa. Union Fenosa Gas had filed a complaint with the ICC in 2013 alleging that “its state partner had failed to comply with contracts by halting gas supplies in 2012 and not making payments.”