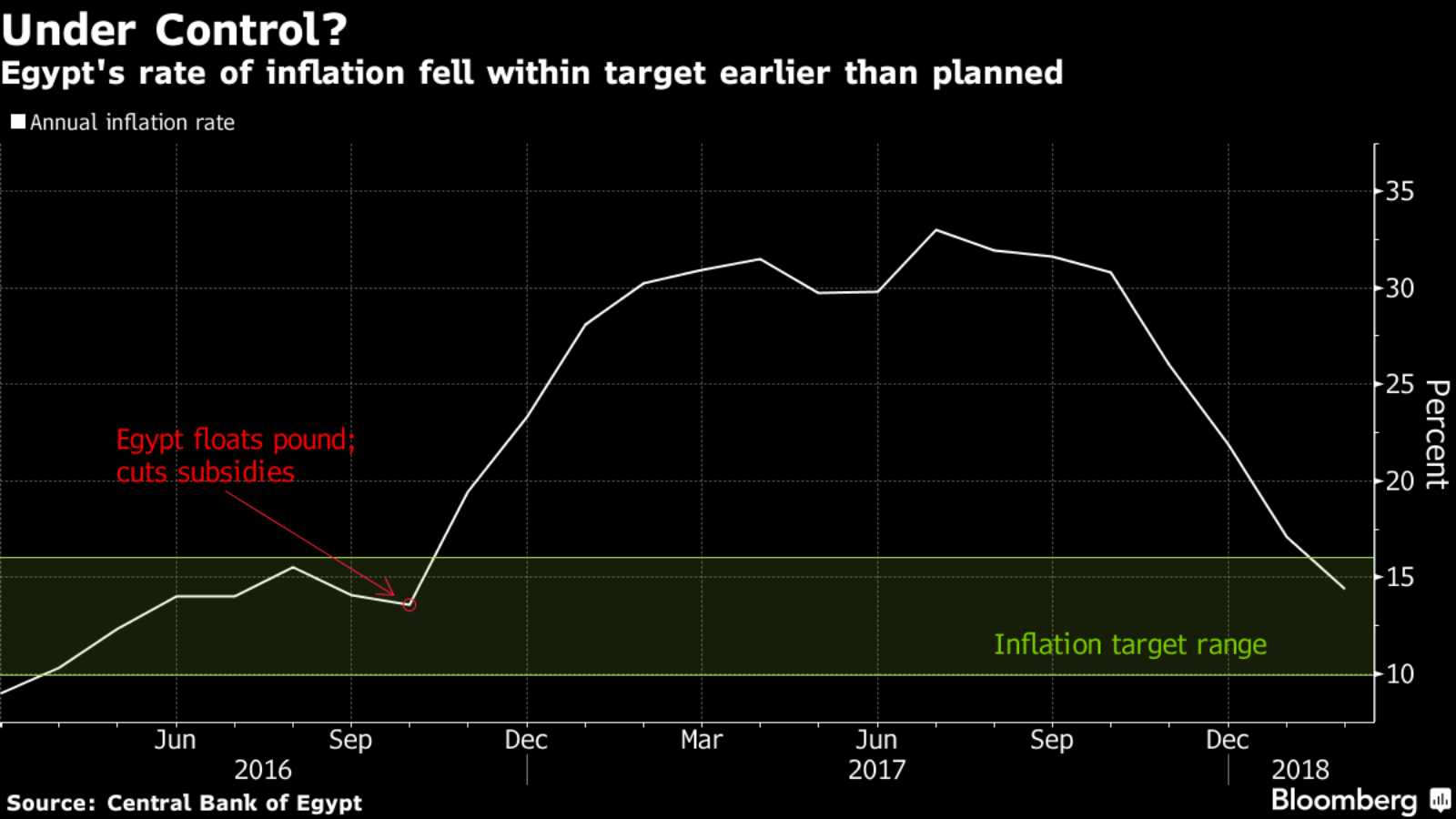 The central bank’s Monetary Policy Committee cut interest rates 100 bps on Thursday, the CBE said in a statement (pdf). The central bank’s overnight deposit rate is now 16.75%, its overnight lending rate and discount rate also dropped 100 bps to 17.25%. The move was in line with market expectations, Reuters reports, with research houses having unanimously predicted a rate cut. Nine out of 11 economists polled by Reuters and all eight economists surveyed by Bloomberg predicted a cut.

Inflation is under control: The rate cut is a continuation of the monetary easing first adopted during the February interest rate cut as inflation continues to decline, the statement said. Annual headline inflation fell to 14.4% in February from a high of 33% in July 2017, and core inflation dropped to 11.9% last month from a high of 35.3% in July — the lowest they’ve been since 2016. “Cutting key policy rates today remains consistent with tight real monetary conditions and with achieving the inflation target of 13% (±3%) in 4Q2018 and single digits thereafter,” the CBE said.

…but we’re still looking at a summertime bump in inflation: “Domestic risks surrounding the inflation outlook include the evolution of inflation expectations, the timing and magnitude of potential subsidy-reform measures, as well as demand-side pressures. Risks from the global economy are crude oil price developments and the pace of tightening financial conditions,” the CBE’s Thursday statement warned.

GDP Growth also factored into the decision. Real GDP growth reached its highest levels since 2010, growing for a fifth consecutive quarter in 4Q2017 to 5.3%. GDP in FY2017 reached 5.0, according to the CBE. The pickup was attributed to growing exports following the EGP float and a rise in consumer spending. This coincided with a drop in unemployment to 11.3% in December 2017.

Subsidy cuts in July and the impact on the carry trade has economists seeing a slowdown of the rate cuts. “The rate cut was expected given the sharp fall in inflation, but the CBE is likely to pause until the second half of the year before easing further. This will give it the chance to evaluate the inflationary effects of future rounds of subsidy reductions,” Bloomberg Economics’ Ziad Daoud said, adding “It’ll also allow it to assess the impact of the recent cuts on portfolio inflows.”

Will banks be canceling their high-yielding CDs? SAIB Bank officials will meet tomorrow to discuss interest rates, while Banque du Caire’s Asset-Liability Committee will meet on Monday to decide on whether to discontinue entirely or just lower the yield of its 15% CD, Chairman Tarek Fayed said yesterday, Al Mal reports.

Banque Misr and the National Bank of Egypt plan to lower their interest rates by 100 bps, sources with knowledge of the matter tell Al Masry Al Youm. Both institutions will also be asking for the CBE’s guidance on whether or not to cancel high-yield certificates of deposits altogether.

Banque Misr has no intention of scrapping its 17% CDs, according to Deputy Chairman Sahar El Damaty, who also said yesterday that the bank’s ALCO will meet soon to discuss Thursday’s rate cut. Banque Misr had reduced the yield on its 20% CDs to 17% after the central bank slashed rates by 100 bps back in February.