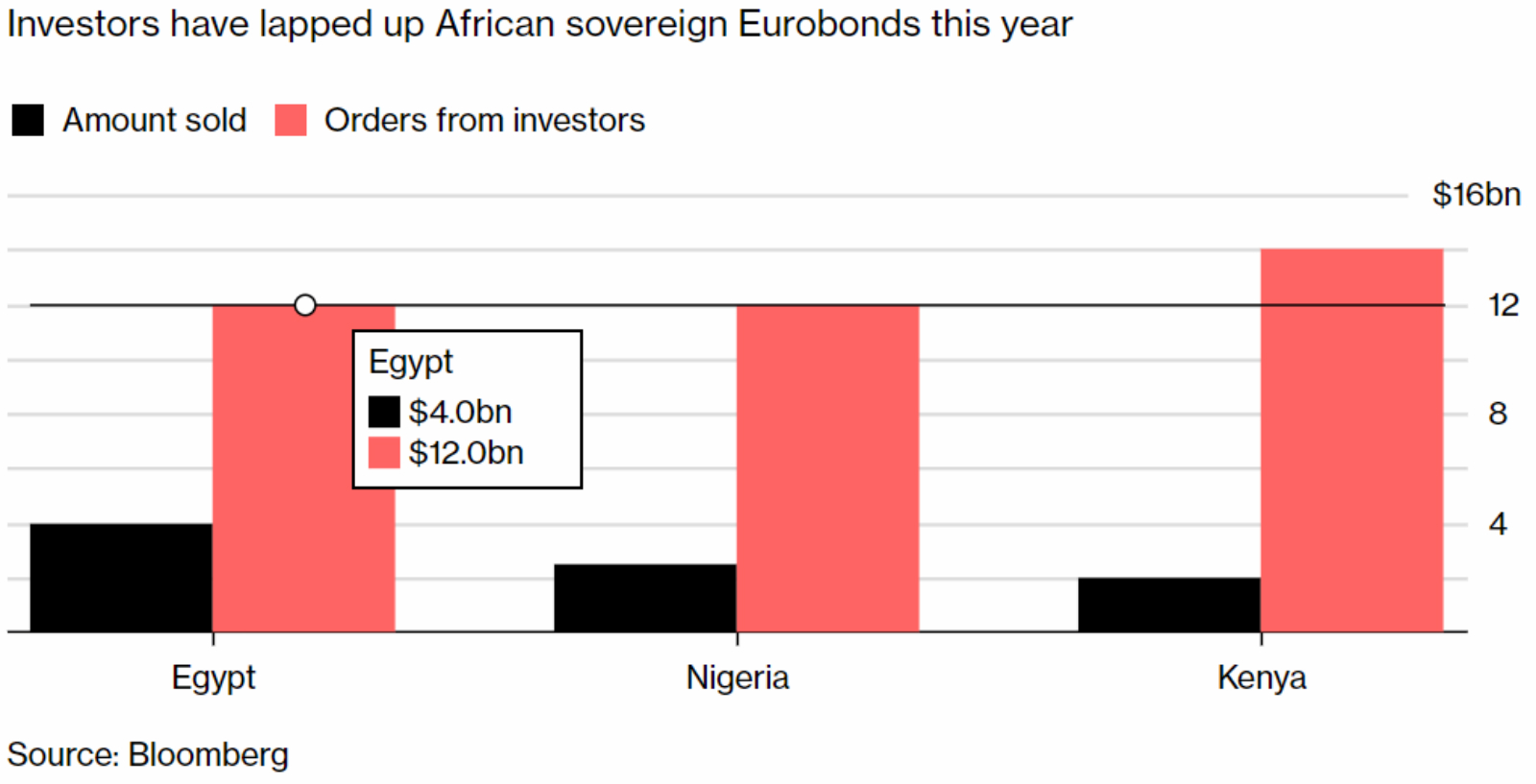 Egypt’s USD 4 bn in eurobonds listed on LSE: The listing of Egypt’s successful USD 4 bn multi-tranche eurobonds on the London Stock Exchange (LSE) was completed last Wednesday, the LSE said in a press release on Thursday. “Despite market volatility, the order book peaked at USD 12.5 bn,” the bourse added. “As a global market, LSE is committed to supporting Egypt’s economic development and growth program through capital raising on our markets,” said LSE CEO Nikhil Rathi. “We are honored to welcome Egypt’s multi-tranche bond listing to our markets, which reflects the City’s ability to provide a deep, liquid and complimentary channel of finance for the development of the country,” he added. “This will send a strong message of global investor support for Egypt’s economic reform programme,” said the UK’s Minister of State for the Foreign and Commonwealth Office and Department of International Development, Alistair Burt.

Proceeds from the issuance have already hit Egypt, Finance Minister Amr El Garhy told Youm7 on Thursday, bringing Egypt’s net FX reserves to around USD 41 bn, banking sources told the newspaper. We’re not getting the math on this one, since the CBE reported earlier this month that reserves in January had reached USD 38.2 bn. Assuming this is not the only source of FX in Egypt this month, the reserves figure is likely larger.

Gov’t begins extensive local bank borrowing today after interest rate cuts: The Ismail government is increasing its appetite for domestic borrowing following the interest rate cuts with a planned EGP 16 bn T-bill sale today, according to Youm7. Vice Minister of Finance Ahmed Kouchouk had said last week that Egypt will floating more EGP-denominated paper as long-term borrowing costs in Egypt get cheaper. Analysts, including those from Capital Economics, had hoped that falling interest rates might help move domestic credit more towards the private sector, after years of heavy government borrowing that some felt had crowded out the private sector.

Foreign Minister Sameh Shoukry is heading to Brussels and Geneva today for a short visit. Shoukry is set to take part in a meeting tomorrow between the foreign ministers of the Six-Party Arab Committee on Jerusalem and their European counterparts at the EU headquarters in Brussels. He will then head to Geneva to deliver Egypt’s speech at the UN Human Rights Council and the UN-sponsored Conference on Disarmament.

Legendary investor Warren Buffett’s annual letter to shareholders is out, and as usual, it is a model of clear, blunt writing. We’re not certain this year’s letter was written by the legendary, retired Fortune writer Carol Loomis, but her DNA is everywhere to see. Among our favorite passages: “Charlie and I view the marketable common stocks that Berkshire owns as interests in businesses, not as ticker symbols to be bought or sold based on their ‘chart’ patterns, the ‘target’ prices of analysts or the opinions of media pundits. Instead, we simply believe that if the businesses of the investees are successful (as we believe most will be) our investments will be successful as well. Sometimes the payoffs to us will be modest; occasionally the cash register will ring loudly. And sometimes I will make expensive mistakes. Overall – and over time – we should get decent results. In America, equity investors have the wind at their back.” Read the full letter here (pdf).

Chinese automaker Geely, already a presence in Egypt via GB Auto, has added a 10% stake in Mercedes-Benz parent company Daimler to its portfolio, making it the latter’s largest single shareholder. Geely, the most globally ambitious of the Chinese automakers, already owns Volvo and Lotus.

Oil output to rise in 2019? “OPEC and its allies including Russia may next year ease the crude-output curbs that have helped prices recover from the worst crash in a generation, according to Saudi Arabia’s oil minister,” Bloomberg reports.