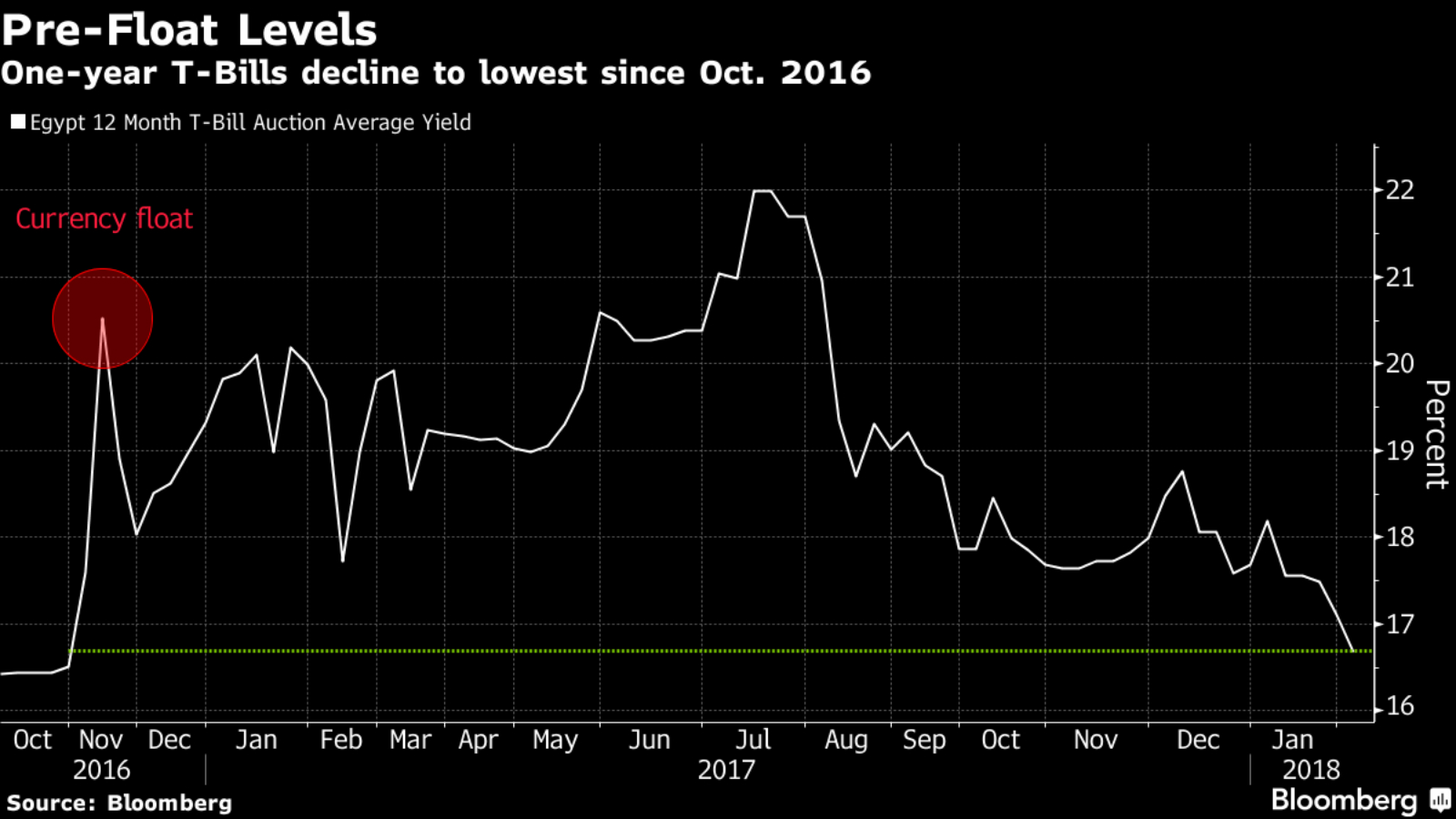 Yields on Egypt’s T-bills fell to their lowest point since right before the EGP float in 2016, according to Bloomberg’s Ahmed Feteha. Yields on one-year treasury bonds has fallen to 16.7%, the lowest since two-weeks before Egypt lifted currency controls.

EFG Hermes economist Mohamed Abu Basha sees this as a sign that some investors anticipate an interest-rate cut when the central bank’s Monetary Policy Committee meets next Thursday. CBE Governor Tarek Amer stoked anticipation of a possible cut when he said on Tuesday that the central bank would adopt a looser monetary policy once it is sure inflation had been reined in.

Would lower yields mean lower foreign appetite for Egyptian treasuries? Abu Basha doesn’t think so. “If investors take their money out of Egypt, they have to put it somewhere else,” Abu Basha said. “What other opportunities are there in frontier and emerging markets that provide similar returns given Egypt’s relatively low risk?”

Meanwhile, look for an announcement as early as today that Egypt has completed a USD 4-5 bn Eurobond issuance. Finance Minister Amr El Garhy had said earlier in the week that the transaction would wrap in matter of days.

SELLOFF WATCH- Asian markets were mixed at dispatch time this morning and US markets closed down slightly yesterday, trimming gains earlier in the session.

Food for thought: One player says algorithmic trading is behind the selloff, saying it has been “driven by computers and not traders’ fears over market indicators.” And think for a moment before you try to buy the dip, the Financial Times cautions.

Egyptian, Sudanese FMs, intelligence bosses meeting to cool-off tensions: Foreign Minister Sameh Shoukry received his Sudanese counterpart, Ibrahim Ghandour, as the latter arrived in Cairo last night ahead of talks set for today, according to Foreign Ministry spokesman Ahmed Abu Zeid. Ghandour and Shoukry are expected to discuss “outstanding issues” between Cairo and Khartoum, including diverging views on the Grand Ethiopian Renaissance Dam. Sudan and Egypt’s intelligence service chiefs are also expected to have a separate sit-down before the four officials gather for a joint meeting later in the day, Abu Zeid said, according to Al Masry Al Youm.

Trade and Industry Minister Tarek Kabil arrives in Singapore today. Kabil will meet with his part, Koh Poh Koon, Al Mal reports, and attend a conference organized by Singapore’s SECC Group on the 33 mn sqm industrial city it will establish in Fayoum. Kabil also set to meet the regional director of Singapore’s Economic Development Board and the head of the Singapore Business Association.

Beware: Shay and smoking don’t mix: Woe to the nation, whose two favorite pastime can lead to cancer when mixed. Drinking scalding hot tea has been linked to an increased risk of esophageal tumors for those who smoke and consume alcohol, Chinese researchers have found.

Temperatures will keep rising through the weekend before cooling on Sunday. Expect the mercury on Friday and Saturday to reach highs of 31°C in the capital—and watch out for a cooler Sunday and stormy weather all through next week nationwide, Meteorological Authority boss Ahmed Abdel Aal said yesterday, Al Shorouk reports..

The Cairo Governorate has approved slapping fines of between EGP 200 and EGP 5,000 on litterers, Youm7 reports. The governor has reportedly granted local officials the authority to fine citizens caught littering in public spaces. We’d cheer this full-throatedly if it were accompanied by (a) an awareness campaign, (b) the deployment of trash bins city-wide, and (c) if those trash bins were to be regularly emptied by either municipal contractors or whatever company has been hired to have staff pretend to clean.

What you read this past week: Among the most-clicked stories in Enterprise this week were: