The deregulation trend in international markets 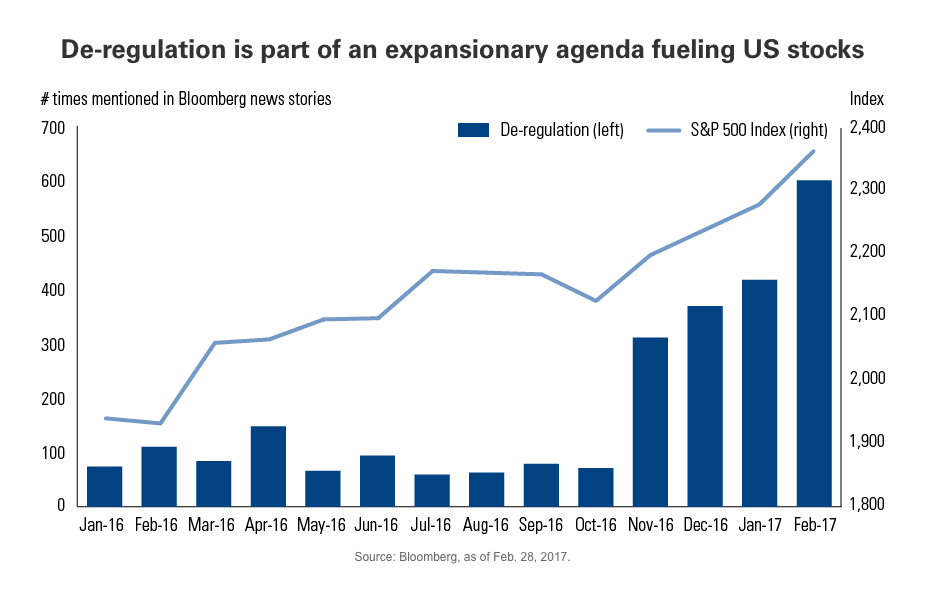 The trend toward international harmonization of regulations has lost momentum as the world’s largest economies realign policies to meet domestic priorities of stability and growth, according Goldman Sachs Asset Management. There is a clear diversion internationally, with the US pushing for more deregulation and Europe and China moving differently.

“The initial expectation of a less-burdensome regime, combined with tax cuts, has driven US indexes to new highs on sentiment… We see opportunities in Financials, as the sector is trading at a discount to long-term averages on some metrics relative to other sectors, where valuations already reflect positive sentiment,” says John Arege, Co-Lead Portfolio Manager of Large Cap Value & Large Cap Core Strategies. In Europe, while there is deharmonization, “regulatory tightening probably peaked early last year with the Basel III proposals, and regulators have since worked with market participants to scale back. Standards will still get tougher, as new measures will be implemented in the next few years, but they are less aggressive than originally drafted, and the industry has more certainty.”

The situation in China is more nuanced; GSAM says “regulation in China today is a feat of engineering. Policymakers are managing a globally significant slowdown … Over the past couple of years as growth threatened to undershoot the official target, authorities de-escalated some regulatory objectives. The recent stabilization in growth has allowed the focus to return to reform … We think this environment is fertile ground for active managers… That said, in this re-balancing we are also alert to the risk of policy missteps leading to volatility in global markets.”