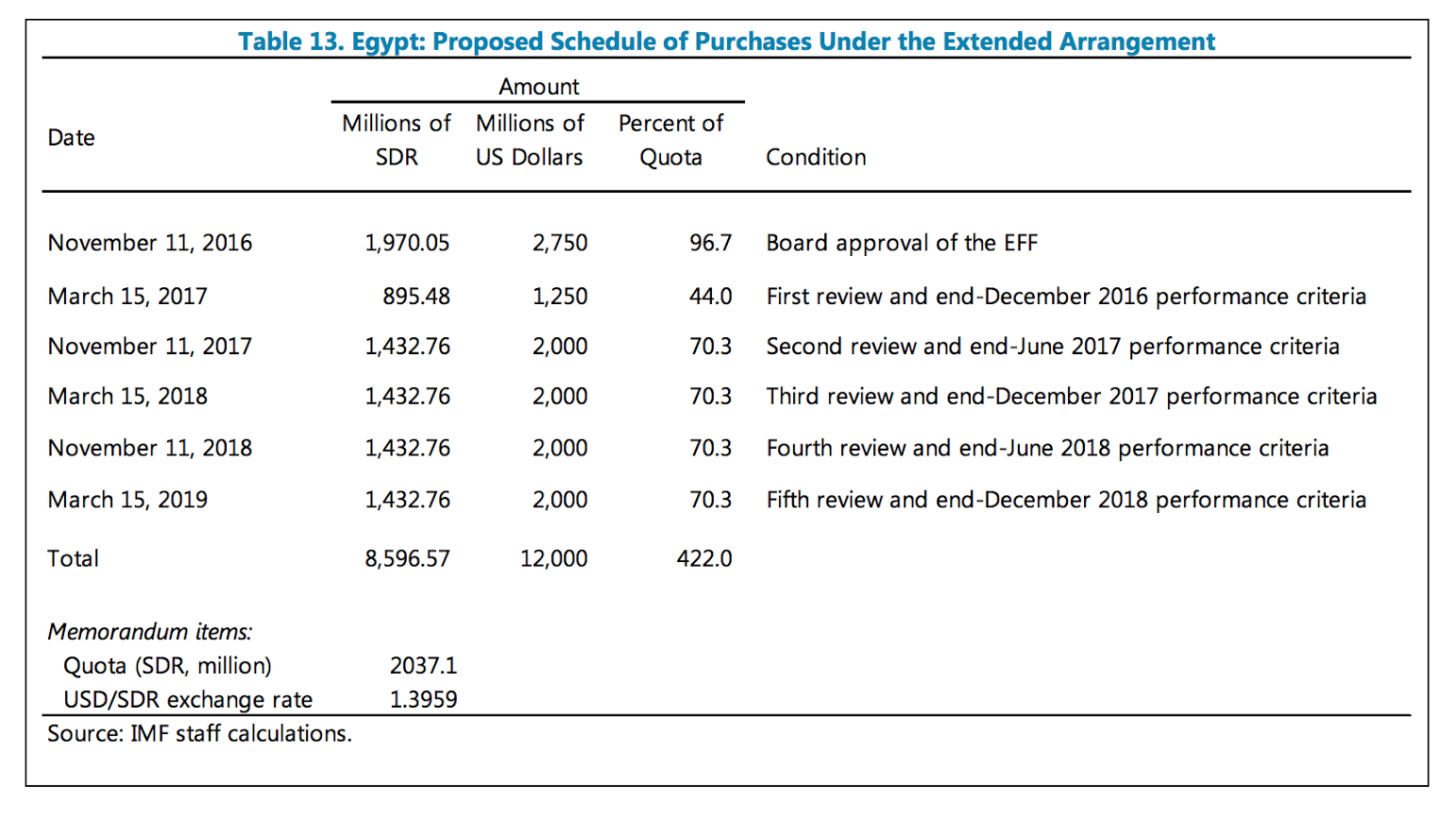 The long-awaited details of the USD 12 bn IMF agreement are here: The Fund released yesterday its staff report (pdf) on Egypt’s Extended Facility Fund (EFF), complete with details on the government’s reform commitments and the Fund’s appraisal of Egypt’s current situation and the path forward. Bloomberg’s Ahmed Feteha gives a neat breakdown of the key elements of the report.

The report sees Egypt as struggling with three main interlocked problems: Rising public debt, an “urgent” balance of payments problem, and persistently low growth and high unemployment rates. Egypt’s EFF carries “significant risks” because of difficulties that are inherent in implementing reform, such as revenue shortfalls and higher-than-expected wage increases, among others, as well as external shocks.

In the medium term, the program’s monetary policy will be focusing on reducing inflation caused by the policy reforms to mid-single digits, as well as scaling down “uncomfortably high” public debt. The Fund has projected that the government’s debt will drop from 95% of the GDP in FY2015-16 to 78% in FY2020-21. By the end of the program, the IMF staff sees overall fiscal deficit reduced to less than half of its FY2015-16 level. Real GDP growth for the current FY is expected to hover around 4%.

The CBE will maintain a flexible exchange rate regime and focus on shoring up reserves by operating mainly on the buy-side once, with gross reserves expected to reach USD 33 bn by FY2018-19, and climb further to reach north of USD 37 bn in FY2020-21. In the meantime, Egypt is expected to continue cracking down on the parallel market. The Fund believes that the banking sector will be able to keep up with the transition to the new exchange regimes. The government has also vowed to remove by June the USD 50K cap on cash deposits for the import of non-priority goods, as well as the USD 100K cap on transfers abroad.

Energy subsidies, we bid you adieu: Fuel subsidies will see “significant reductions,” with the government committed to eliminating electricity subsidies altogether over the next five years. The government will couple the subsidy cuts with a general overhaul of the energy sector to modernize it, and is expected to submit a medium-term strategy by March. Meanwhile, the restoration of EGPC’s financial sustainability will also be on the government’s to-do list.

That’s not to say that the government will leave its citizens out in the cold, as an additional 1% of GDP will be spent on food subsidies and cash transfers to the poor.

The government will also implement structural reforms to boost growth and reduce unemployment through legislation such as the Industry Permits Act, which will be ready by March and the Bankruptcy Act by June, facilitating access to finance for SMEs, developing an action plan to rationalize the export-promotion regime.

When and how will Egypt be repaying the IMF? The IMF notes that Egypt’s capacity to repay the EFF is “adequate, but there are significant risks.” The proposed schedule will see the Fund reviewing Egypt’s performance since the end of December 2016 and disbursing USD 1.25 bn on March 15, after which it will disburse USD 2 bn every six months until March 15, 2019.