How the pandemic has (temporarily) cooled off growth forecasts for Egypt’s construction industry: While the covid-19 pandemic has had minimal impact on some industries in Egypt — such as education, whose defensive mettle was proven both in equity markets and on the capex side — other industries have not fared as well. Construction has slowed, particularly at the outset of the pandemic, and reports suggest that the sector’s growth over the next few years will be weaker than previously anticipated. Earlier this year, we spoke with two of the largest players in the construction industry — Orascom Construction and Hassan Allam — and even then, before government-imposed lockdown measures came into effect, it was clear that the industry was in for a slowdown.

In 1Q2020 alone, the construction sector contracted 9.1%, accounting for EGP 91.35 bn of the country’s GDP income, adjusted for current prices, according to Planning Ministry figures. By way of comparison, agriculture contracted 1.9%, transport, storage, and ICT contracted 8.4%, water and sewage contracted 13.2%, Suez Canal revenues dropped 16.7%, hotels and restaurants shed 20.7% of their GDP contribution, and crude oil and mining nosedived 27.7% during the quarter.

On the employment side, however, the fallout in the construction sector appears to be largely contained when compared to other industries, according to state statistics agency Capmas. The sector lost only 288k jobs — less than half the 624k jobs shed by the retail and wholesale sector.

Infrastructure-related state megaprojects — such as the new administrative capital, New Alamein, and New Galala — played a significant role in upholding this trend, economics professor at the Sadat Academy for Management Sciences Abdel Mottaleb Abdel Hamid previously told Al Monitor. This was anticipated by Hassan and Amr Allam, who told us back in March that they expected to see the government looking to “kickstart the economic cycle and pump liquidity into the economy” to improve the macro climate as soon as the pandemic was under control — and said that construction would likely be the go-to industry to reach that goal.

The expectation for the years ahead is that the sector will reverse the contraction trend, but growth forecasts have broadly been revised downward. Between 2020 and 2024, Egypt’s construction industry is expected to grow at an average 9.6% per year, data and analytics company GlobalData said in a June report. The firm had previously expected the industry to expand at an annual average 11.3% clip between 2019 and 2023, driven by Cairo’s urban development program.

Fitch said much of the same in an April report, saying it anticipates construction growth to register a “still strong” 7.5% in 2020, down from its previous forecast of 9.7%. At the time of the report’s release, many construction sites had yet to resume work as the pandemic continued to unfold and as the government’s lockdown measures to contain the outbreak weighed on activity. The extent of the downside risks to this outlook, Fitch said at the time, “depend[s] on the country’s ability to see a timely resumption of works later in the year.” 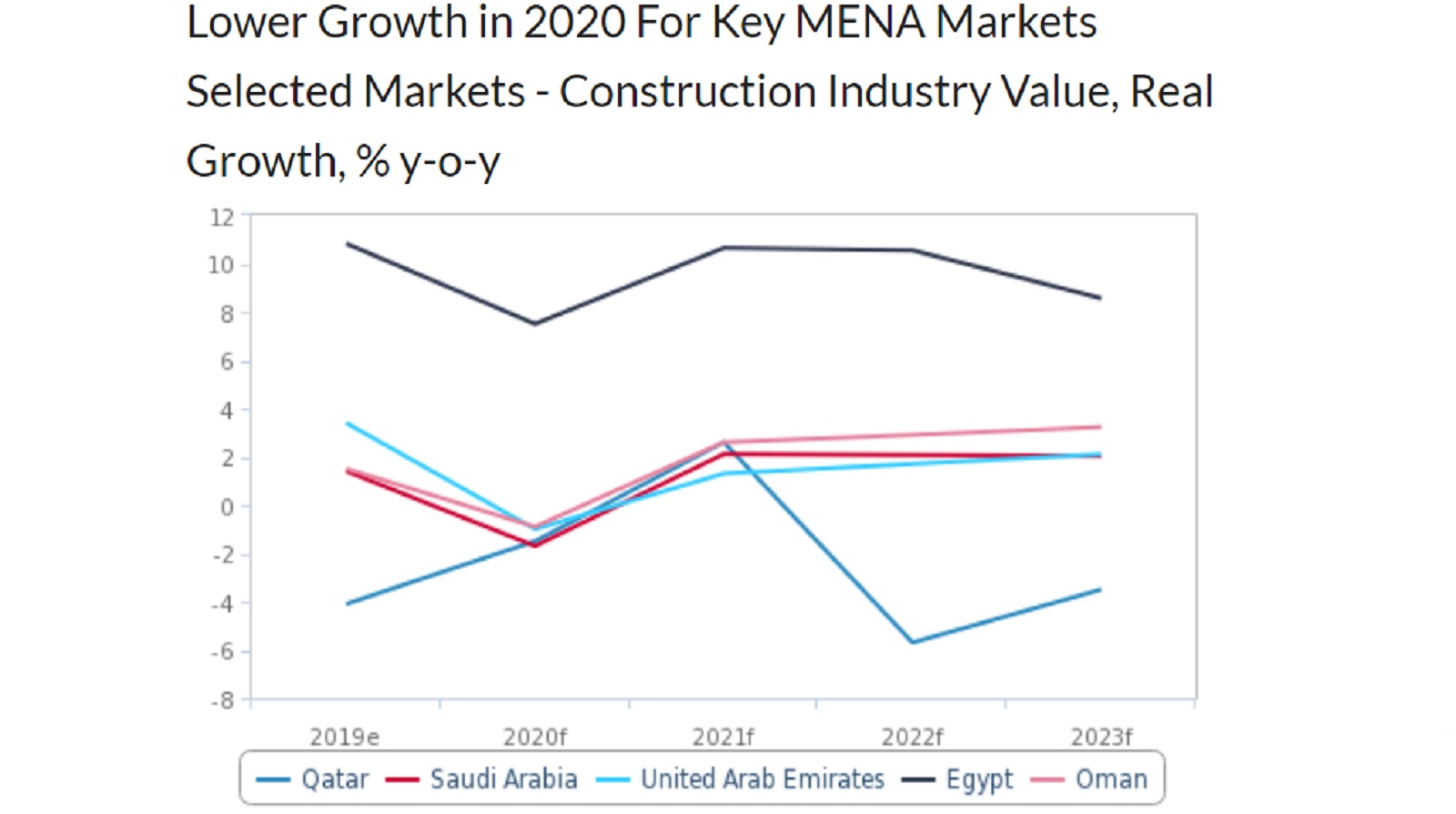 But even with the downturn, Fitch sees Egypt outpacing its regional peers’ construction growth. According to the report, the UAE’s construction industry is expected to contract 1% in 2020, “with both covid-19 and the weakening in the oil market hitting oil production levels and business sentiment in the country.” Saudi Arabia — another key market in the MENA region — is expected to see a 1.7% contraction in its construction industry this year due to a “limited ability for construction activity to continue” during the pandemic. The report has also cut its construction industry growth forecasts for Iraq by a whopping 6%, and each of Morocco, Algeria, Bahrain, Iran, Kuwait, Jordan, Oman, Qatar, Libya, and Yemen between 2 and 4%. Fitch attributes the industry slowdown in these markets in large part to disruptions in global supply chains.

Not helping matters in Egypt, meanwhile, is the continuing cement supply glut: The private cement industry, which has already been reeling from an oversupplied market for months, has been dealt a fresh blow by the pandemic, GlobalData says. Back in April, the outlook for the cement was already less-than-rosy, with industry leaders forecasting a slew of production shutdowns — after National Cement, Tourah Cement, and El Nahda Cement all shut down operations either temporarily or permanently last year — and declining revenues. According to the report, overall demand for cement dropped on a year-on-year basis by 3% in March and 8% in April, after inching up 8% in January and 9% in February.

That being said, the construction industry is expected to stage a comeback in the near future, buoyed by “a strong pipeline of government investments and projects, including the new administrative capital, GlobalData says. The report notes that the new capital’s two residential districts and the business district should be finished in late 2021 and early 2022 — which are expected to help spur a recovery in the industry.